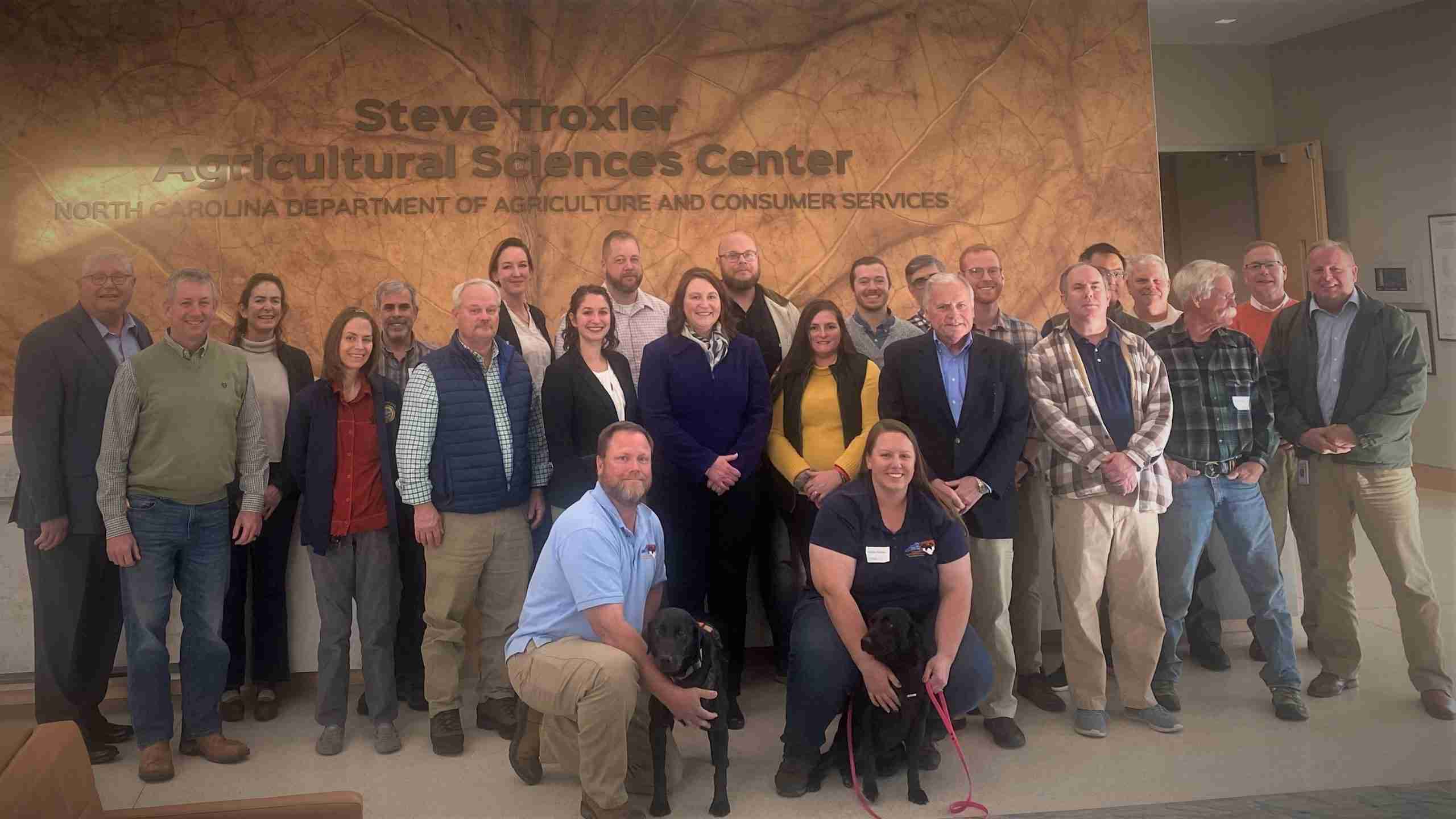 The discovery of a spotted lanternfly infestation in North Carolina created quite a buzz last year, and the reaction by several department employees earned them the NCDA&CS Excellence in Team Accomplishment award. In total, Plant Industry division director Bill Foote nominated 31 employees as part of the team. They were spread across three divisions – Plant Industry, The N.C. Forest Service and Public Affairs. The team even includes the two detector K-9’s “Goose” and “Kita.”

During the award presentation, chief deputy commissioner David Smith said, “I’m impressed by how quickly this team came together to respond after a spotted lanternfly infestation was found in Kernersville. It’s unchartered territory for our state, and this team wasted no time in forming a response that’s serving North Carolina well.”

If you need a refresher, spotted lanternfly feeds on more than 100 species of plants and is a serious threat to North Carolina agriculture. If left untreated, this invasive species spreads quickly and can impede movement of commerce, affect property values and hinder quality of life for people in infested areas.

Fortunately, when the first live population of Spotted Lanternfly in North Carolina was found in Forsyth County in June of 2022, Plant Industry had already been preparing. There had already been staff trainings and compiling of resources. That included adding “Goose” and “Kita.”

The team responded to the spotted lanternfly report immediately and began surveying. The epicenter of the infestation was located within a couple of days, and insecticidal treatment began just three working days from the date of the citizen report. It’s hard to miss: the spotted lanternfly is a colorful insect! The immature form is black with white spots (top left) and, in its last immature stage, also has red coloration (top right). When at rest, the top wings are held tent-like and are gray with black spots (bottom left). The underwings are bright red and may be seen in flight. Images: L. Barringer, PA Dept. of Agriculture, Bugwood.org.

After the initial response, the team then quickly developed more control strategies. That has involved community awareness campaigns, pest surveying, refinement of mapping tools, development of a Spotted Lanternfly public reporting website and treatments to trees and the bugs themselves.

All of those things are reasons Foote thought the team was worthy of special recognition. He even came up with a list that itemizes some of the major factors in his nomination:
• The employees came together quickly
• Different divisions were involved, so employees worked across divisions outside of their norm
• The initial survey area exceeded ten square miles
• The number of surveyed properties exceeded 3,000
• Team members treated seven acres by backpack sprayer over difficult terrain
• The outdoor work happened during a hot summer with challenging conditions
• Most survey/treatment locations contained skin/clothes-tearing weeds (briars)
• The team members maintained a collaborative and positive attitude

“The bottom line is this group worked hard for several months to accomplish a difficult task under extreme conditions. I was really amazed by the team atmosphere and the speed at which they became productive,” Foote said. “There was no fighting or competition for notoriety – except for the dogs. They love attention! Nobody felt their role was beneath them.”

In the first month there were more than 1,400 parcels assessed and more than 940 acres treated. The ongoing survey and treatment area now extends more than three miles away from the center, covering almost 20 square miles (with more than 3,000 parcels surveyed now).

“I was also impressed with their consideration afforded to the landowners when they were surveying and spraying,” Foote said. “We had very few complaints from property owners, and the few landowners who resisted our efforts to survey and treat were dealt with kindly and compassionately. They were eventually won over, and the teams were allowed to survey/treat almost everywhere. This group represented the department with character and determination. Anybody who witnessed them at work would be impressed.”

From the beginning, the employees relied on many different department resources to cover the area, from pickup trucks, four-wheelers and mapping programs, to binoculars and chain saws.

Also, it’s important to realize that, from day to day, there were different people in the groups that went out in the field. They still all collaborated as a team, with morning meetings and daily plans.

In his nomination, Foote said, “the work progressed smoothly, efficiently, and rapidly, despite the constant mix of people and responsibilities. A cooperative spirit was evident by the volume of work accomplished.”

Public Affairs was involved to inform the public and coordinate interviews with local news outlets. Removing acres of Tree of Heaven was also accomplished, thanks mostly to the team members from the N.C. Forest Service. That tree is a favorite of the spotted lanternfly.

Now, the team continues to prioritize this work while also covering their other job responsibilities.

Foote also described the work as cost effective and practical. He said shared efforts and great attitudes made it possible for the team members to work long productive days.

“All along the way, their efficiency and collaboration has helped the work go smoothly, which means time and resources have been put to good use,” Smith said before presenting the award. Their hard work is something we all should be grateful for.”

If established, spotted lanternfly has the ability to destroy vineyards, impact the nursery industry and impede all commercial shipping. Without this eradication effort, a greater economic cost for pest control would have been borne by homeowners, businesses and farmers. Spread of the Spotted Lanternfly has been halted in Kernersville thanks to planning, rapid response and these dedicated employees who have spared the remainder of the state from fighting massive infestations later.

Even other states have taken note of some new strategies they used in their response, and that is getting some positive attention beyond North Carolina also. Some of the team members who were present for the award presentation.