The faces of wildfire response and training to answer the call 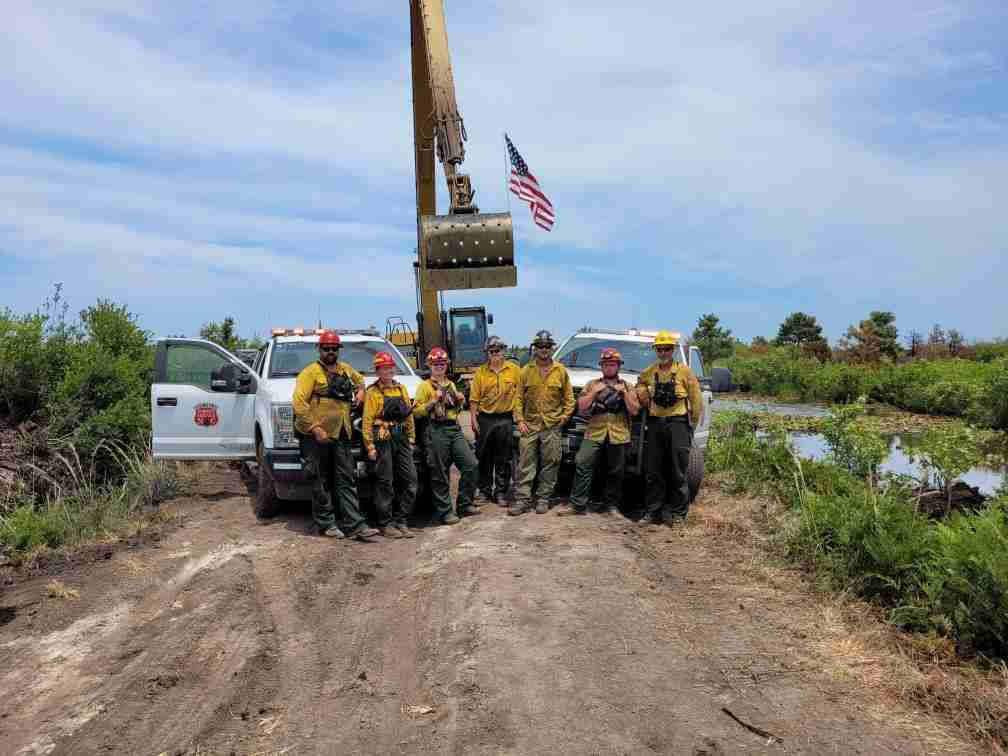 Now that we are well into the fall months, images of wildfire activity have begun to infiltrate media outlets and platforms across the country as several states are in the heart of fall wildfire season. Local, state and federal agencies are pushing public information and mass messaging as they urge caution to their residents and visitors. Everyone’s favorite wildfire prevention icon, Smokey Bear, will spend a great deal of time visiting fair’s, fall festivals and other community engagement events to reinforce his five important rules of fire safety. The reality is that people are going to be actively outdoors during the fall and where there is human activity, there will be wildfires. Some of these wildfires will come with a heavy price tag whether in the form of dollars, property loss or even fatalities. During the 2021-2022 fiscal year, North Carolina experienced 6,887 wildfires that burned nearly 27,000 acres. Of those wildfires, 99% were caused by human activity, most of which was in the form of careless burning. For the personnel on the ground responding to these wildfires, it’s not a matter of if, but when.

So, who are the men and women answering the call when a wildfire takes place? Depending on the size and severity of the incident, the lead response agency may deploy a team of resources ranging in size from a Type 5 incident commander (IC) to a Type 1 incident management team (IMT). Type 1 IMT’s manage the most intricate, severe and large scale incidents. Each IMT is comprised of incident qualified personnel and trainees that include a command staff, operations section, planning section, logistics section and finance section. The IC can downsize or expand the IMT when deemed necessary. In the case of the recent Ferebee Road Fire that burned 1,938 acres in Hyde County beginning June 19, 2022, the N.C. Forest Service (NCFS) assigned a Type 3 IMT to direct incident response. Over the duration of the next three weeks in which the fire burned, the NCFS would have as many as 90 personnel assigned to the incident, with 37 of those being trainees.

Every profession has a starting point, and every employee takes a first step in developing their craft. Agencies that respond to wildfires consist of seasoned veterans who bring a wealth of knowledge to any incident and green first timers who are getting their initial taste. Having that mentor-to-mentee balance is crucial to the process of training and developing the next group of wildland firefighters. It’s important to note that in most cases, forest service personnel who are dispatched to a wildfire will be trained in areas that are vastly different from their daily obligations to the agency.

Katelyn Keller, who has been with the NCFS since May 2021, was assigned to the Ferebee Road Fire. She wanted to expand her credentials and experience with wildfires while working toward her Firefighter 1 qualifications. Keller previously served as a pickup firefighter in Henderson County, and attests her desire to pursue this avenue to having a great teacher and mentor within the N.C. Forest Service. Katelyn Keller (front), said it was a special experience being able to work alongside her mentor, Kristin Almond (back), while the two were assigned to the Ferebee Road Fire.

“She was instrumental with instilling that desire in me and helping me with the transition from when I was a pickup firefighter,” said Keller. “Having a mentor who has the time and patience to walk you through the process and teach you how to do something the right way is priceless and makes all the difference in the world.”

Keller went on to explain that her experience on the Ferebee Road Fire was even more meaningful since she was able to work alongside her NCFS mentor who had also been dispatched to the same incident as an engine boss.

“We were able to work as a unit during Ferebee Road which has also been my longest dispatch to this point,” Keller said.

When Keller’s not on dispatch, she serves as the education and outreach coordinator at DuPont State Recreational Forest.

The impact this training process has on the national landscape cannot be overstated as well. When obligations and circumstances allow, personnel and resources do not remain in North Carolina. They are often deployed to various parts of the country to assist with ongoing wildfires in other states. Shortly after completing his task book while on the Ferebee Road Fire, Robbie Beeson, assistant county ranger for Guilford County, was deployed to Texas as an engine boss to assist with initial attack on multiple wildfires. “I enjoyed my time in Texas as an engine boss since driving the Type 6 engine is part of my day-to-day duties in North Carolina,” Beeson said. “But, I was able to learn even more once I got out there with the supervisory aspect that comes with that role, and it has a little different feel to it. Your primary responsibility is to prioritize resources, manage personnel and make wise decisions when doing that.”

Beeson supervised a 5-man crew as his unit provided structure protection during the Hermosa Fire. He also spent time on various incidents in Washington, California and Tennessee while working to obtain his qualification as an engine boss.

Not every task book pathway situates personnel on the fire line standing toe-to-toe with the flames. There are several key components of incident response that are equally as important to carry out a successful operation. Austin Harriett is a service forester assigned to the District 4 office in Craven County, but during the Ferebee Road Fire he served as a resource unit leader. A resource unit leader (RESL) establishes and maintains all check-in activities for the incident which includes monitoring and tracking resources assigned to the incident. Resources may include personnel, equipment and food. A RESL must not only know how many people are assigned to the incident, but where they are on the fire. A RESL also develops the incident action plan (IAP) and 209, which are documents that account for all this information to be submitted to multiple agencies. Harriett has participated in several check-in processes for a variety of incidents, but the final task remaining on his task book checklist is to supervise the activity.

“The biggest challenge facing the resource unit leader is ensuring all resources and personnel are properly checked in and the system is accurately reflecting resource data,” said Harriett. “Obviously a wildfire is a serious situation that requires urgency, and when you have so many moving parts relative to resources, it’s easy for a heavy equipment unit or personnel to get thrust into the action without proper check-in. If someone goes unaccounted for, and the resource data isn’t accurately entered into the system, then you don’t know who or what you have.”

One example where this could be an issue is with the meal count. The meal count is based off data uploaded into the system and if the data in the system isn’t accurate, the meal count for the day might be off by a few numbers which results in someone not getting fed.

“It’s a lot of work, but I enjoy it. I enjoy seeing everyone as they come in for check-in. It provides the opportunity for me to meet new people within the division and get reacquainted with folks I haven’t seen in a while. When you have a division with nearly 700 employees serving a state with 100 counties, it may be quite a while before you cross paths with someone again.”

No effort is successful without some sort of tactical blueprint or game plan. Whether a sporting event, military operation or emergency response effort, understanding the elements you face is a crucial component to achieving the objective at hand: knowing where you are, where you’re going and where you’ve been. Topographical details such as mountain ranges, road networks, terrain conditions or nearby water sources are obstacles that all wildland firefighting crews encounter, and that’s where a geographical information system specialist (GISS) like Clell Britt comes in. Britt is responsible for providing accurate spatial information and has been on numerous assignments in North Carolina as well as stops in California, Montana and Idaho. The latter provided Britt with an opportunity to obtain the final signature needed to complete his GISS task book when he deployed to Salmon, Idaho to provide support on the Moose Fire.

An assistant district forester for the N.C. Forest Service, Clell Britt served as a GISS for the Ferebee Road Fire.

“If you’re not accustomed to mapping, it’s a pretty steep learning curve to becoming a GISS,” Britt stated. “I really enjoy the technical aspect of mapping. Technology is constantly evolving, and mapping programs continue to become more advanced,” he added. “You’re also on a constant timeline as the incident changes. The map is your guide and if that’s not up to date, the incident commander doesn’t have accurate information on which to base decisions.”

In addition to topographical information, a GISS is essential in helping determine the amount of acreage that’s been burned and the containment progress that crews have secured. Clell serves as an assistant district forester for the NCFS when not on an incident.

These are just a few of the countless jobs needed to carry out a successful response to a wildfire. Depending on the severity of the incident, personnel and resources can be expanded or reduced as needed. New, younger employees are gaining the field experience needed while receiving quality mentorship from those who have been doing it for many years. One thing that’s for certain, no job is more or less important than the next. Not only do they continue to protect the citizens and natural resources of North Carolina, they also willingly answer the call when help is needed in other states across the U.S. This career path requires a collection of individuals who move and work as a unit. The focus, sacrifice and dedication these people pour into their duties are necessary to protect life, property and the communities that they serve. And, all of this begins with training.