Fighting fire in the ‘third dimension’ and the road to recovery 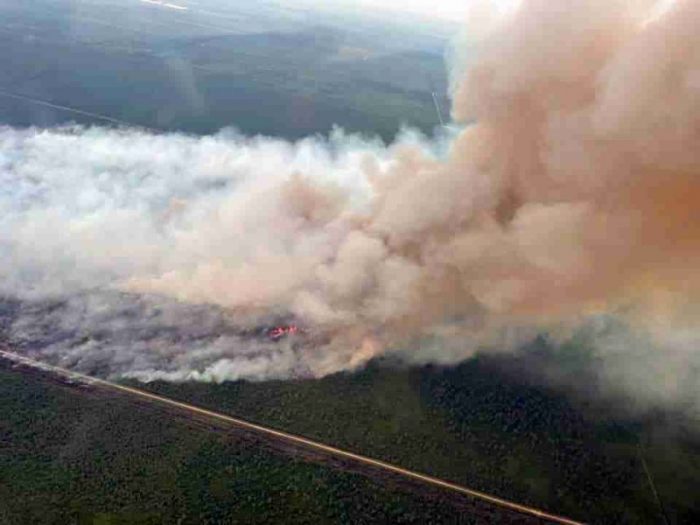 Since 2010, more than 42,000 wildfires have taken place in North Carolina, burning well over 400,000 acres. The approach to fighting wildland fire is anything but “one size fits all” when considering the vast geographical differences throughout the state. The blueprint for containing and suppressing a wildfire in the mountain ranges of western North Carolina cannot be the same tactics applied to the sandy soils found in the east. The same goes for the Piedmont region sandwiched between the two. Techniques and strategies deployed by the N.C. Forest Service to combat wildfires must be as unique and appropriate as the terrain in which they are entrenched. Smoke production as a result of strategic firing operations conducted by the N.C. Forest Service at the Ferebee Road Fire.

With an annual statewide average of 4,155 wildland fires, eastern North Carolina encounters more than their fair share. Most recently in Hyde County, N.C. Forest Service personnel battled the Ferebee Road Fire for more than three weeks. The fire was caused by a lightning strike June 19, 2022, and burned 1,938 acres of private land. The Ferebee Road Fire, burning in the scar of a previous wildfire, prompted early comparisons by residents to the Evans Road wildfire. Much larger, the Evans Road Fire burned more than 41,000 acres over the duration of three months beginning June 1, 2008. Both wildfires presented many challenges due to several ecological factors consistent with much of eastern North Carolina. The area is densely covered by trees and highly flammable shrubs and bushes, making it easy for fires to spread quickly. Larger blocks of woodlands can add additional obstacles for responders when a wildfire takes place. “Equipment is difficult to maneuver and operate due to the reduced road network, poor access points to some of the road systems in this part of the state and the thickness of the vegetation,” said John Cook, District 13 forester with the N.C. Forest Service. “Hand crews aren’t an option here like they are in the mountain region, and the tractors can become easily stuck in the softer soil. Just these factors alone increase the likelihood that a fire may grow and spread quickly.”

Cook was assigned to the Ferebee Road Fire as an incident commander trainee. Even with the many challenges presented by the large acreage available to burn and minimal road systems, those aren’t the most difficult factors. The wet natured soil found in the coastal region of North Carolina is a whole different animal of its own. While the organic peat soil is wet natured, it has the potential to severely dry out during prolonged periods without rain. A wildfire in these elements not only burns horizontal across the surface but will also burn vertically into the deep peat soil, known as a ground fire. Hot spots continue to smolder at the Ferebee Road Fire.

“It’s like fighting a fire in the third dimension. That’s about as simple as I can explain it,” said Cook. “The fire doesn’t exactly move at the same speed or spread in an even manner. Once it begins to move vertically it’s like an underground coal fire or a burning pile of mulch. It goes down and under because of the organic matter, searching for and feeding off dry pockets and maneuvering around the wet spots.”

The main objective for wildland firefighting crews is to keep the fire as small as possible by depriving it of dry, unburned fuel that it uses to spread and increase in size. N.C. Forest Service personnel do so by using bulldozers and tractors to cut fuel breaks around the fire. Some existing road systems that surround the fire area become part of those containment lines.

“Due to potential flare ups or wind gusts that may cause a fire to push beyond a containment line, we’ll widen the fire break using a technique called potato patching,” said Cook.

Potato patching is a unique technique that can be used in eastern North Carolina where some areas of the landscape is divided into large squares separated by a gridwork of forest roads. Crews will use the established road system as the initial fire break and plow additional lines on the offside and parallel to that road, widening that fuel break. Backfiring operations on the approaching fire side of the road will reduce the amount of available fuel as the wildfire approaches the road, and the potato patching on the offside of the road will work as small containment areas for any fire brands trying to spot across the road. This helps firefighters contain the wildfire and prevent it from spreading further.

“Potato patching is a difficult technique to deploy in the sense that it’s very time consuming,” said Kit Gibbs, ranger at the nearby Dare Bomb Range. “However, it’s crucial to widen those fuel breaks as much as necessary to prevent potential spot overs from jumping our containment lines and making another run on the opposite side of the break.” Gibbs was part of the initial attack crew responding to the Ferebee Road Fire. “In the event there’s a spot over, these fuel break lines will buy us some time to get crews to the area for suppression efforts before the fire has an opportunity to start burning down into that deep pocosin.” As was the case with the Ferebee Road Fire, a water source may not always be in proximity of the fire area. Special water operations must be conducted to pump water into the fire area, and those operations will be challenged by the same obstacles faced by the heavy firefighting equipment. Once water is released into the fire area following extensive and advanced water pumping operations, the topography still presents a challenge. The center of each block of land usually sits a few feet higher than the perimeter near the road system and this uphill climb makes it difficult for the water to reach the center of the fire area. Even as the water saturates the majority of the fire area along the perimeter, high hot spots remain in the middle. Drone footage from the N.C. Forest Service captures the Ferebee Road Fire area. The wide fuel break created by dozer operations known as potato patching can be seen to the far left of the photo just on the other side of the road.

“Think of it as a doughnut,” said Cook. “The hot spot is the doughnut hole in the center while the doughnut is the fire perimeter that has received water saturation.”

As the water saturates the perimeter, the ground fire is extinguished. Over time, the hot spot in the center of the fire area will remain under firefighting personnel surveillance until it eventually runs out of available dry fuels and burns itself out or receives substantial rainfall. Emergency response to wildfires, hurricanes and winter storms is just one of the many services provided by the N.C. Forest Service. As the state’s population continues to grow, the number of annual wildfires is also expected to increase. With a little more than three months remaining in 2022, and with the impending arrival of fall wildfire season, the state has already seen its total number of wildfires surpass 2021’s totals. The N.C. Forest Service has already begun efforts to reduce the negative impacts from several forest threats including wildland fire. Earlier in 2022, the N.C. Forest Service revealed North Carolina’s recently updated forest action plan which aims to increase the beneficial use of prescribed fire, manage and conserve forests for clean water and protect forests from threats. These efforts, along with the many programs and services offered by the N.C. Forest Service designed to assist landowners with managing their woodlands, will help keep North Carolina’s forests heathy and thriving for future generations.