A research project that has received funding from the NCDA&CS Bioenergy Research Initiative is exploring the possibility of growing American sycamore trees as a farm crop. The head researcher (called a principal investigator) John King, Ph.D., sees “growing” evidence that the trees planted in rotation on farmland could be a new revenue stream for farmers, while also improving soil health.

“I want people to start thinking about American sycamore not as a tree – not as a forestry species in the traditional sense – but as a crop that we can integrate into conventional farming systems,” said King who is a professor of tree physiology and ecosystem science in the Department of Forestry and Environmental Resources at N.C. State University. 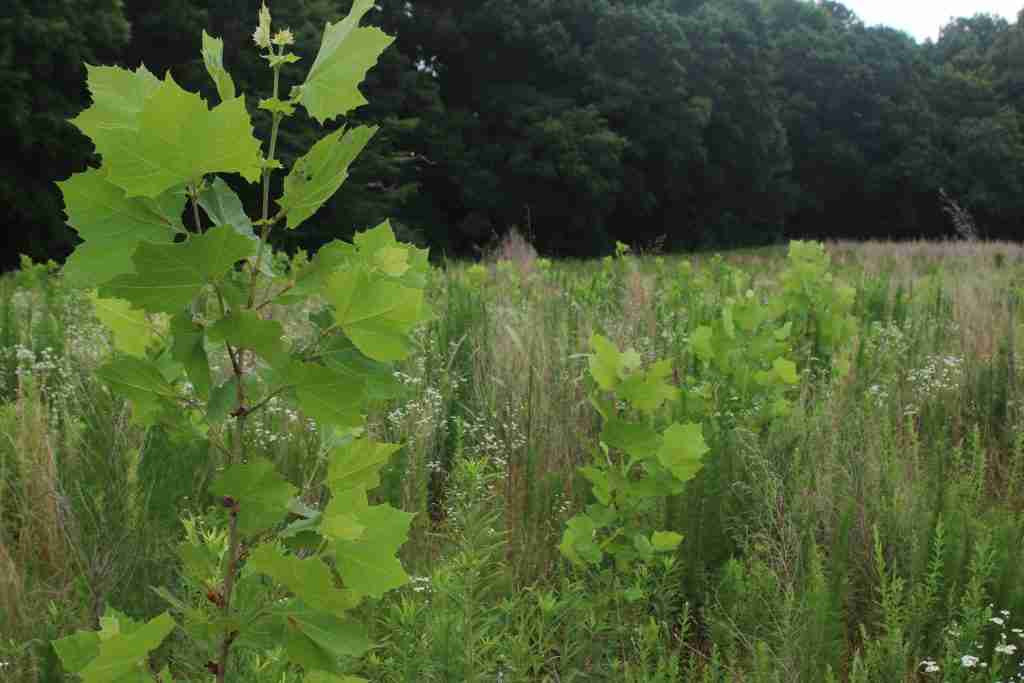 American sycamore trees grow on a research plot near Butner. 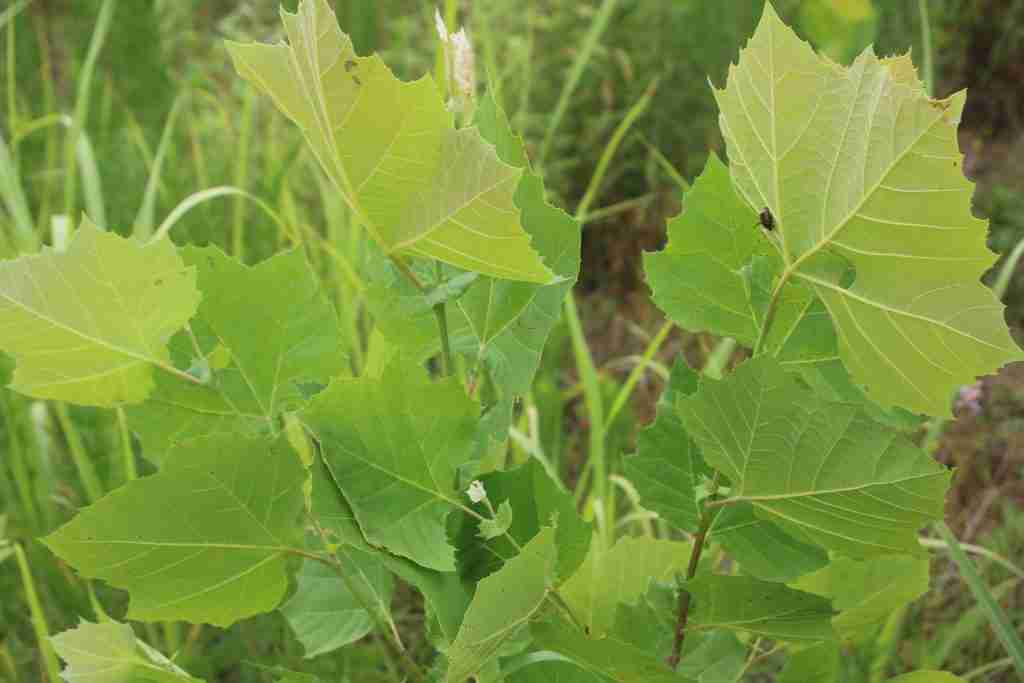 The American sycamore has shown resistance to many stresses. 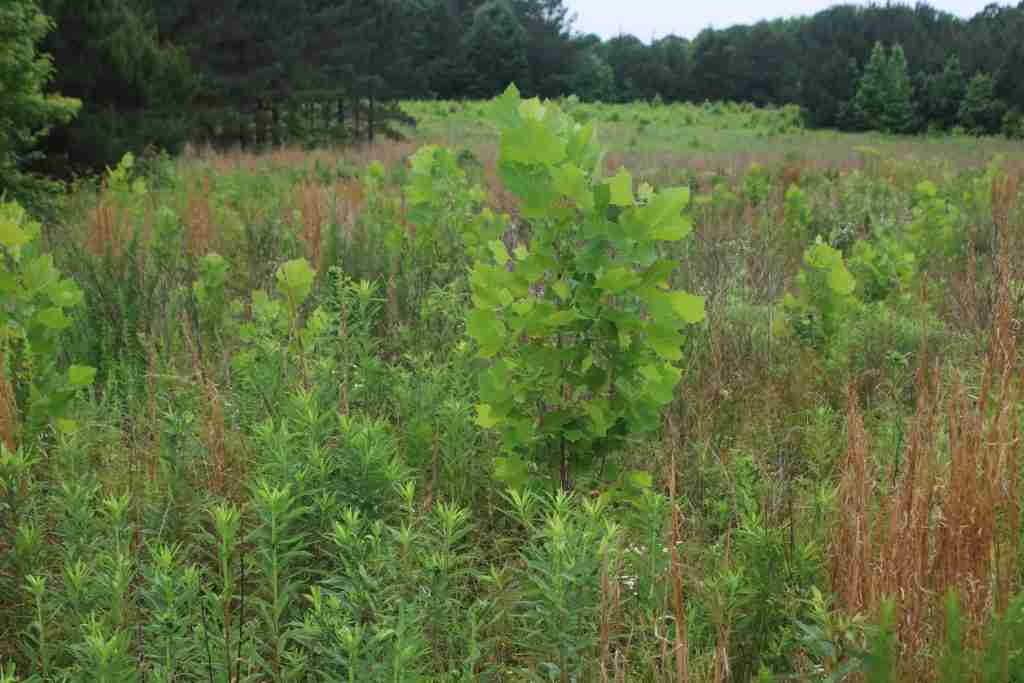 These trees, shown in June ’22, are in their second season of growth. 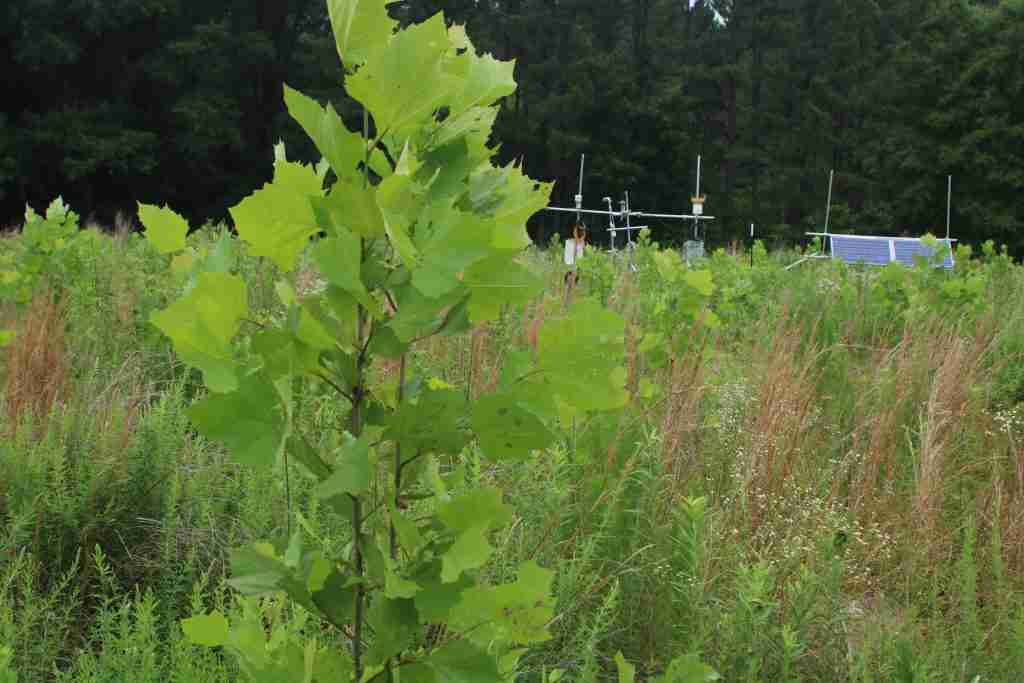 An instruments station (in the background) helps measure weather, tree and soil characteristics. John King, Ph.D., stands with a sycamore tree planted in 2021 as part of his ongoing research.

King has been looking into the idea with field research for more than a decade at multiple sites across North Carolina. He explained that farmers could essentially follow the same steps as his research:  First, buy readily available sycamore seedlings from the N.C. Forest Service (at nurseries in Goldsboro and Greensboro). Second, subsoil a field and plant the trees. Third, the trees can be left to grow for three or four years with essentially no inputs (fertilizers, herbicides, tillage), as American sycamore trees have proven to be very resistant to problems such as drought, insects and other stresses in the environment.  Even without fertilizers or herbicides, the trees will grow to prominence and shade out weeds and underbrush. Fourth, once the trees have grown for three or four seasons they can be harvested mechanically, after which they will re-sprout the following spring.

“In forestry, we call that coppicing. We harvest the aboveground material to produce wood pellets, for example, and then the trees will re-sprout automatically,” King explained. “They just come back from the stump, and then we have a second rotation of a tree crop. We wait three or four more years, take another harvest, and then repeat – it will regenerate again.

“So, we plant it one time, but we’ll get at least three or four harvests out of each planting. By planting several fields at staggered intervals, farmers could produce annual harvests of woody biomass for wood pellets or other uses.  We know this system maintains productivity in typical North Carolina settings, because we have experiments that have been going on for over twelve years now, and we’ve seen no drop off in biomass over that length of time, again without fertilizers or other inputs.”

The researchers do not know how many coppice cycles the tree stumps can tolerate before productivity drops off (because current experiments are in the fourth coppice cycle), but when that time comes, farmers can convert the field back to conventional crops, which is actually the intention, to benefit from improvements in soil health. King said the sycamores will have improved soil conditions by that point. 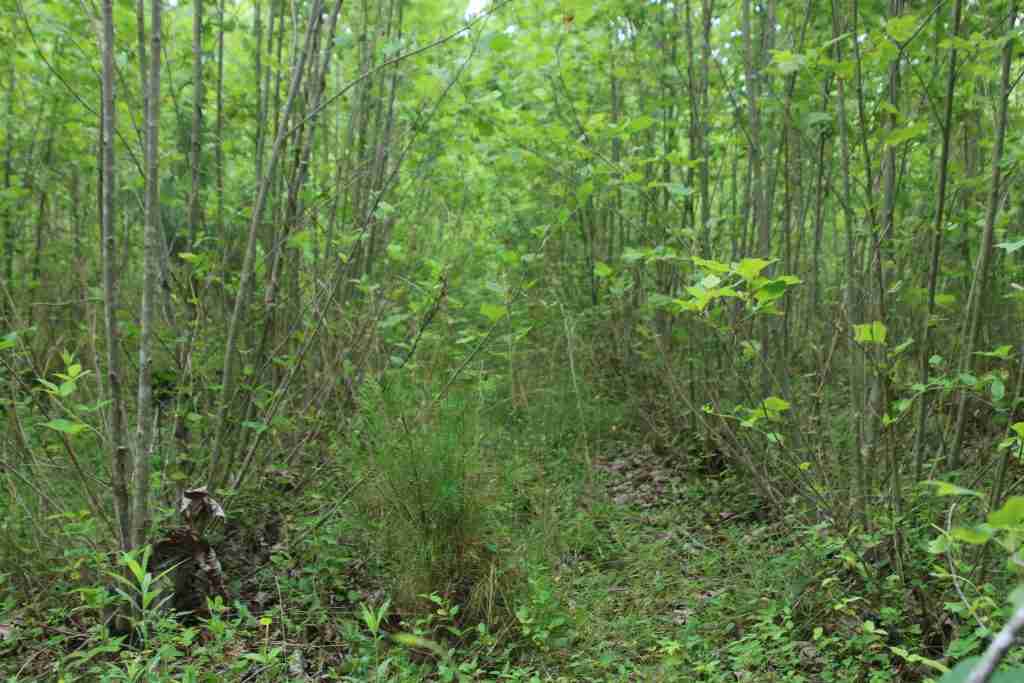 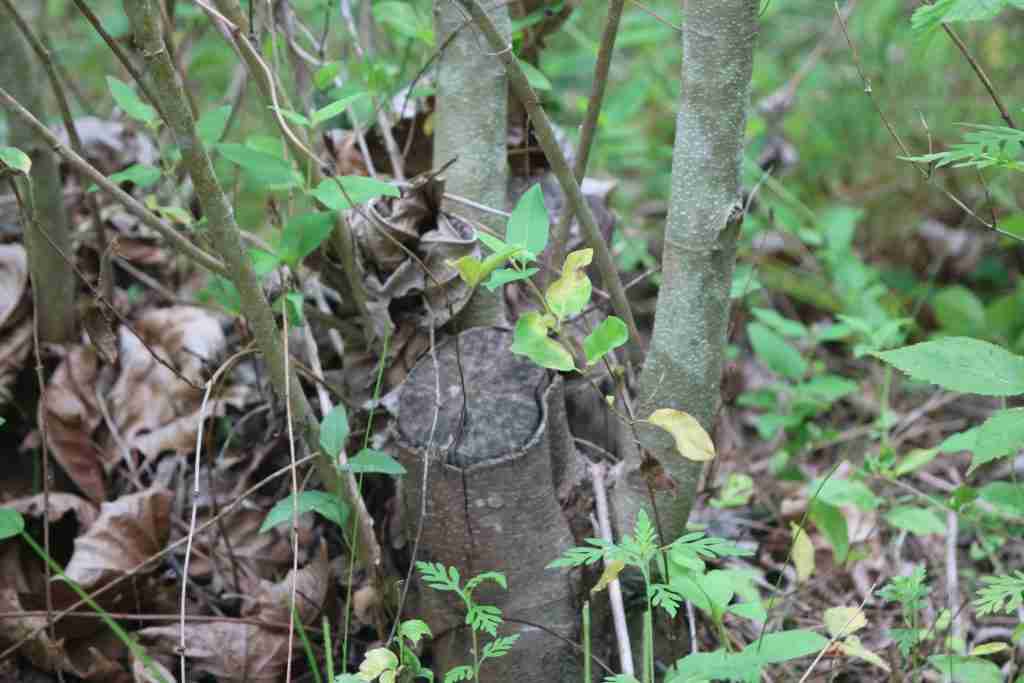 A stump and re-sprouted trees after a harvest. 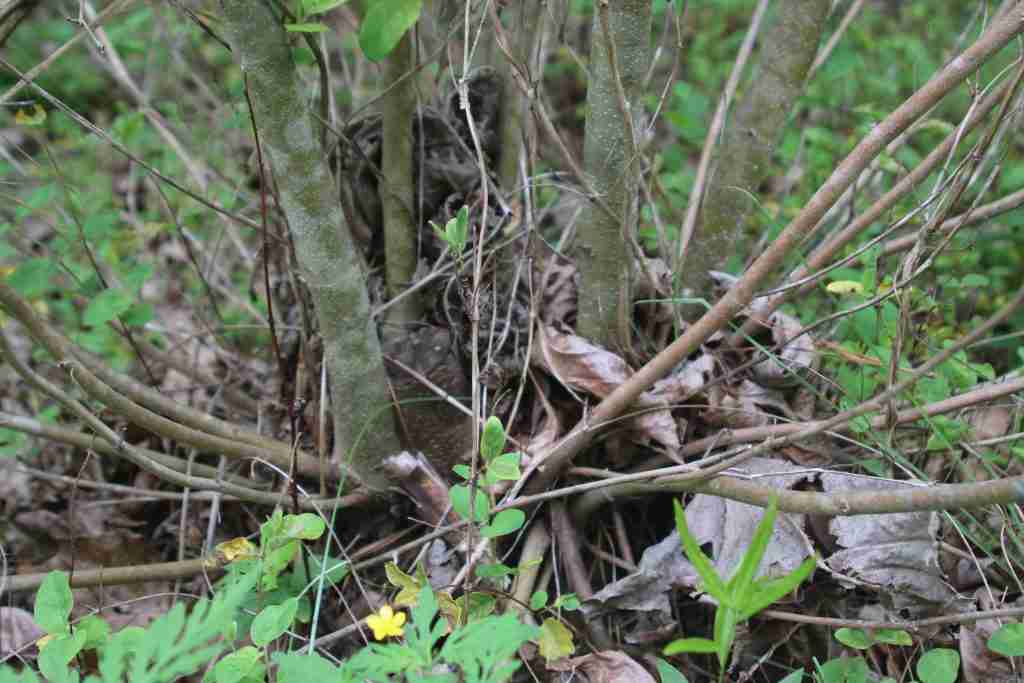 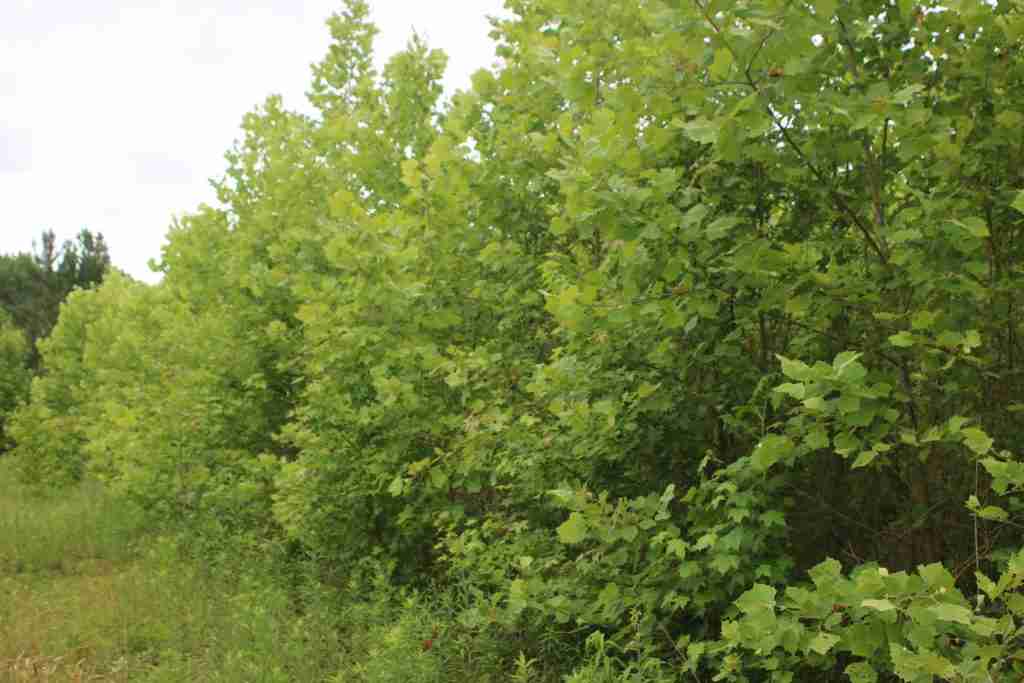 An older growth stand of American sycamore on the research plot near Butner. “You can think of worn-out agricultural soils that require a lot of fertilizer and other inputs to grow crops. Well, if we put a field into sycamore for ten or twelve years, it will improve the chemical and physical properties of the soil. There are a lot of ways that happens – woody roots basically reverse soil compaction, improving drainage, and the roots will “mine” deep into the soil for nutrients such as fertilizers that have been applied over decades. The trees pull those nutrients up and return them to the surface when the leaves fall. That leaf litter layer also adds organic matter to the soil and eliminates the agricultural weed seed bank, hopefully, decreasing the need for herbicides when returned to agricultural crops.  And so, when the farmer puts the field back into agricultural production, our results suggest increased productivity, and perhaps decreased cost of inputs.”

Another benefit of American sycamore as an alternative crop for farmers, is its high tolerance of wet soils. (It naturally grows along stream banks and bottoms.) It can put land into production that might otherwise be too wet for other crops, especially in coastal counties.

King’s field testing has been spread across three different sites in North Carolina, including land in the Butner area that’s part of the Oxford Tobacco Research Station. On that site, there’s an instrumentation station that King and members of his research team use to monitor weather, tree and soil characteristics. With those measurements, their research has shown the sycamore fields have a benefit for carbon sequestration, too.

“This instrumentation helps us measure the environmental footprint of American sycamore short-rotation coppice. The data show a net increase in carbon uptake from the air, putting it in the soil, where it belongs, so it is also very good for the carbon balance of a farm. If trading carbon credits becomes a reality someday, this technology will help farmers get the benefit of it.  The research also shows that American sycamore coppice culture has benefits for cooling the environment through its direct effects on the water cycle,” King said. 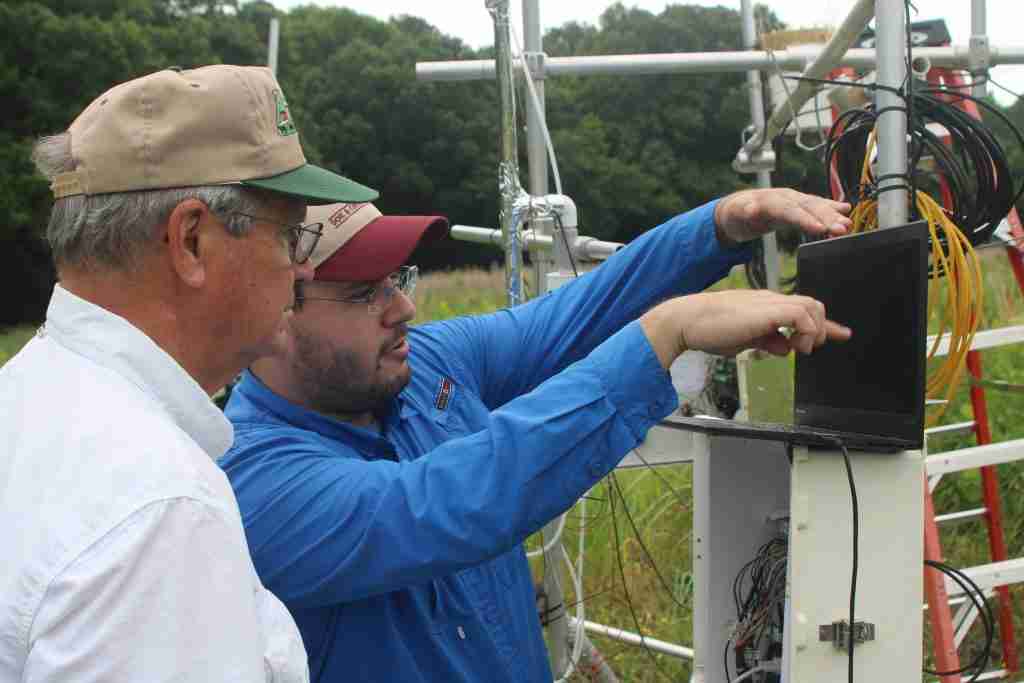 Reports can be shown on a laptop plugged into the station. 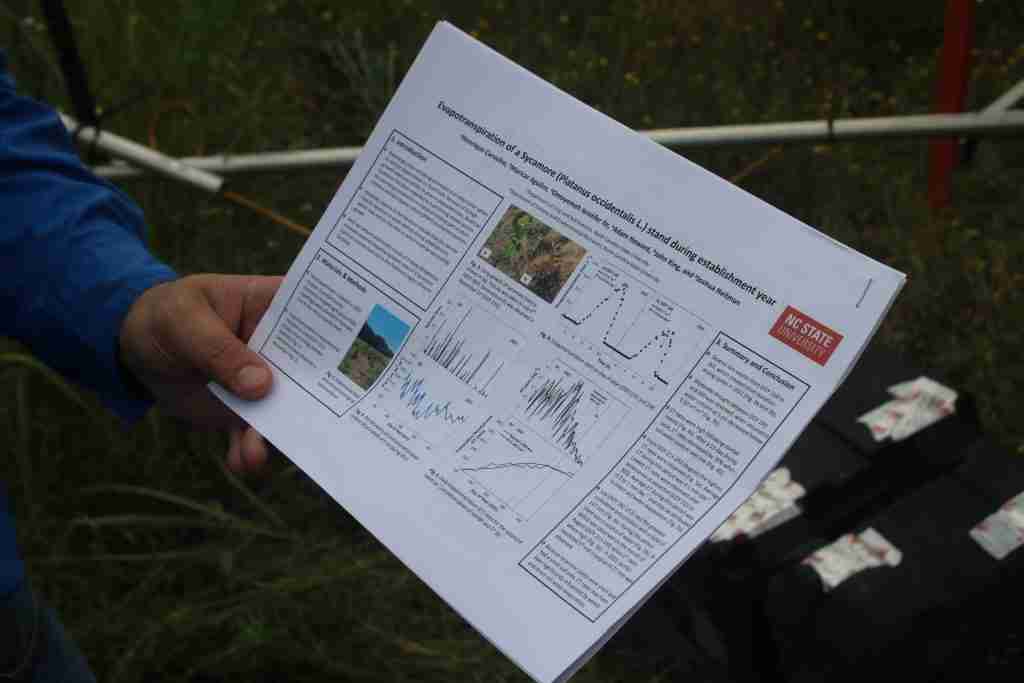 A print out of data gathered. 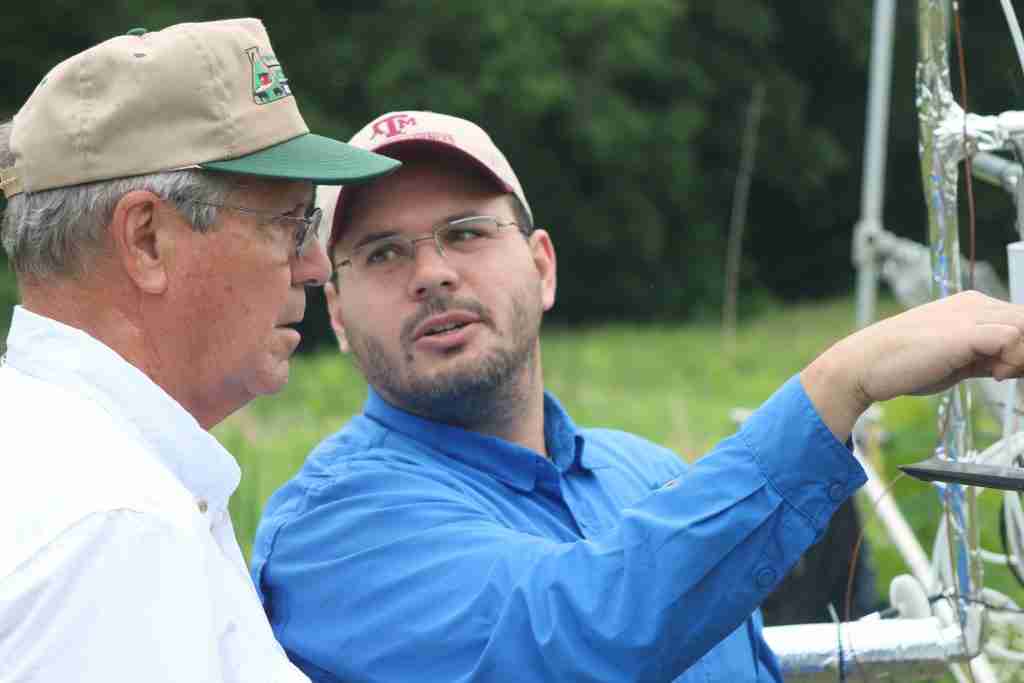 Henrique Carvalho explains some of the data gathered. 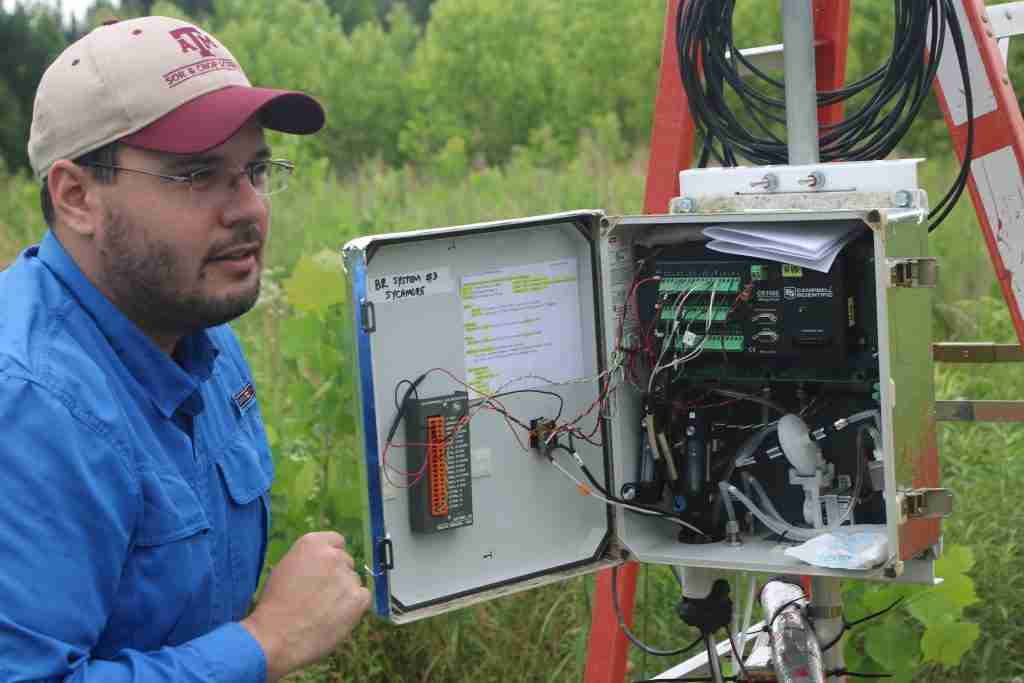 Carvalho shows part of the solar battery power source for the instrument station.

With more than a decade of field trials and data, King and his team believe it’s time to ramp up outreach to farmers and other economic sectors. By “connecting the dots,” the team hopes to demonstrate the feasibility and potential benefits of using agricultural practices to produce biomass feedstocks. That would feed into the growing bioenergy industry in North Carolina and beyond.

According to King, North Carolina is ideally positioned to become a leader in the emerging industry of agricultural bioenergy production.  He said the “dots” that need to be connected in North Carolina are the following things the state already has:

“The economic motivation has to be there. Otherwise, why would people do it?” King said. “The beauty of this system is it can be used to stimulate many different economic sectors:  technology and equipment to grow, harvest, and process the wood pellet feedstocks, and the wood pellets can be co-fired with coal or fired directly for utility-scale power generation. They’re used in home cooking grills, and there’s potential for development of residential and commercial heating applications. 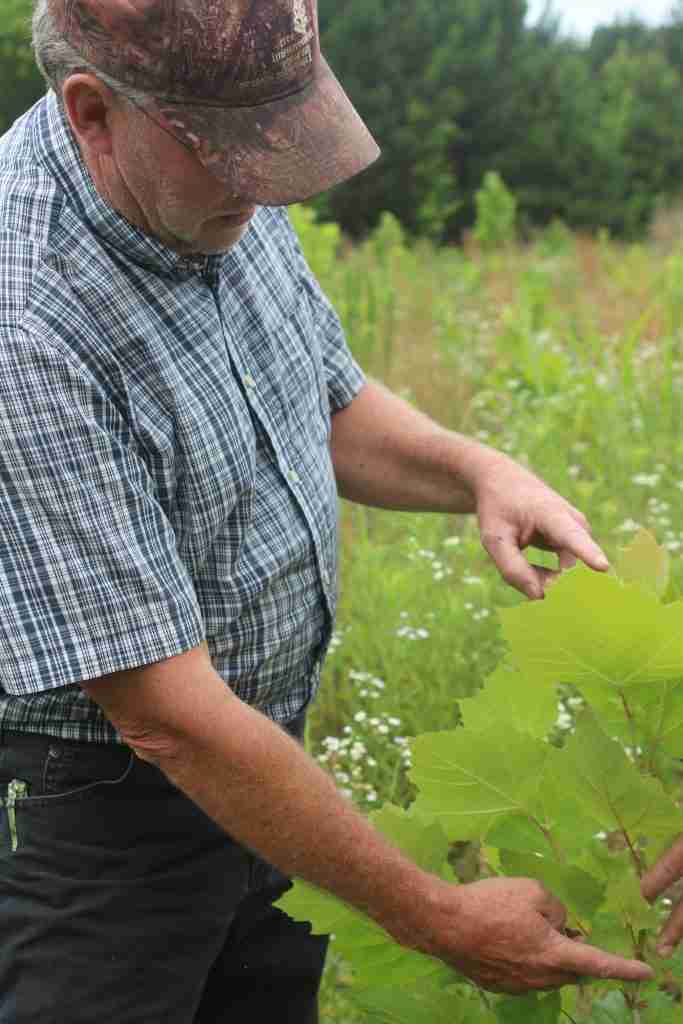 King takes note of growth and size changes in a sycamore tree. 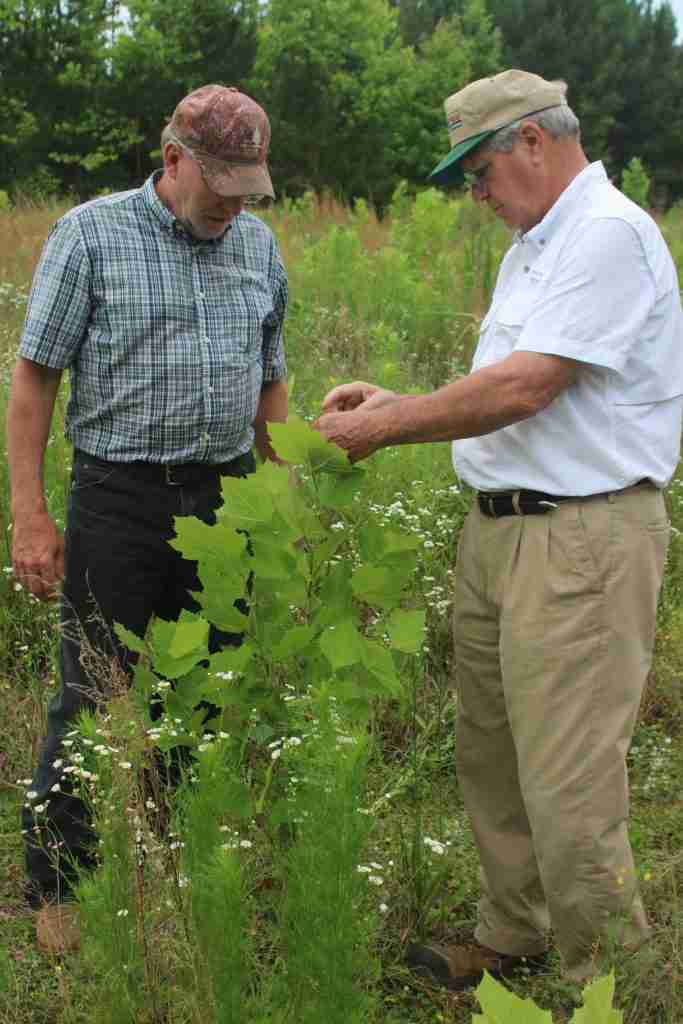 King and Brake examine some of the sycamore trees in the research plot. 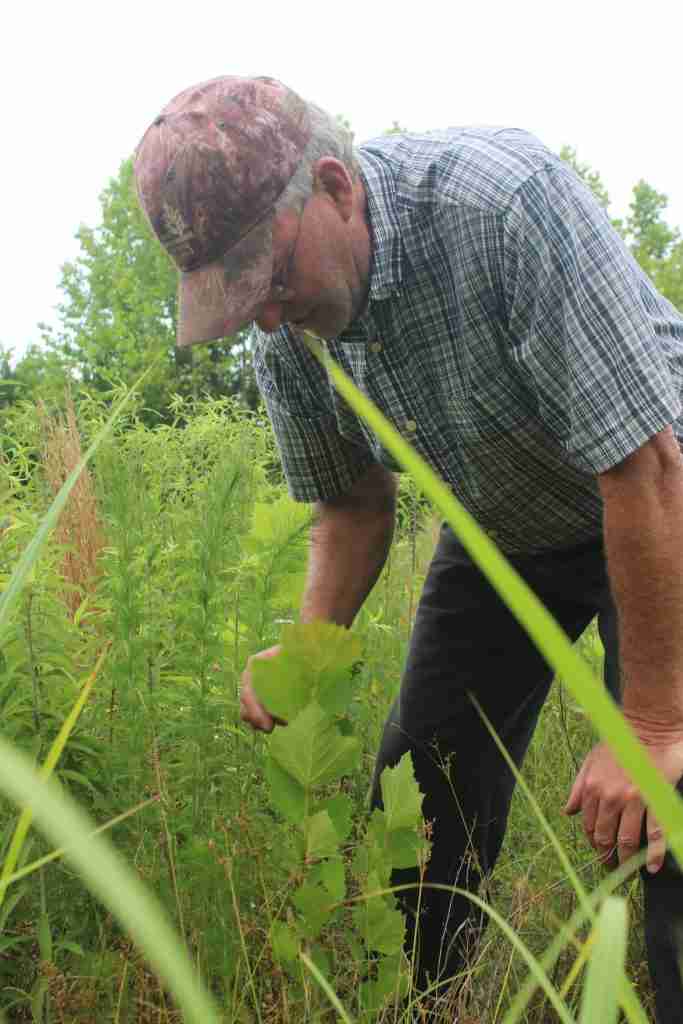 “In today’s market, with very high fertilizer prices, high fuel prices, American sycamore short-rotation coppice culture will be a way to create additional farm revenue streams without having to put a lot of money into it. We think the economics are actually getting more competitive with conventional corn, soybean and other crops on a per-acre basis. We think it will have a lot of potential to support rural communities across North Carolina, stimulate new sectors of the economy, all the while helping our state have an improved environmental footprint.”

King’s project is officially titled Sycamore: Sustainable Bioenergy-Improved Soil Health. A $122,594 grant from the NCDA&CS Bioenergy Research Initiative allowed the team to extend the research to third and fourth crop rotations. The funding also paid for expanding the research from one location to three, working with the wood pellet industry to test sycamore wood quality, measuring soil health improvement and working with farmers on technology development and getting that technology into farmers’ hands. A more recent grant of $99,423 from the Bioenergy Research Initiative is funding a two-year extension of the research. According to King’s faculty webpage, it will help 1.) establish new field trials on operational farms near existing wood pellet mills; 2.) conduct extensive surveys to learn about farmer perceptions of adoption of bioenergy cropping; 3.) conduct outreach activities, including small group meetings, field tours, mill tours and annual field days to forge relationships and transfer technology, based on field trials and survey results; and 4.) perform an economic analysis comparing the short-rotation sycamore “farming” to conventional agriculture (corn/soybeans) to assess market competitiveness.