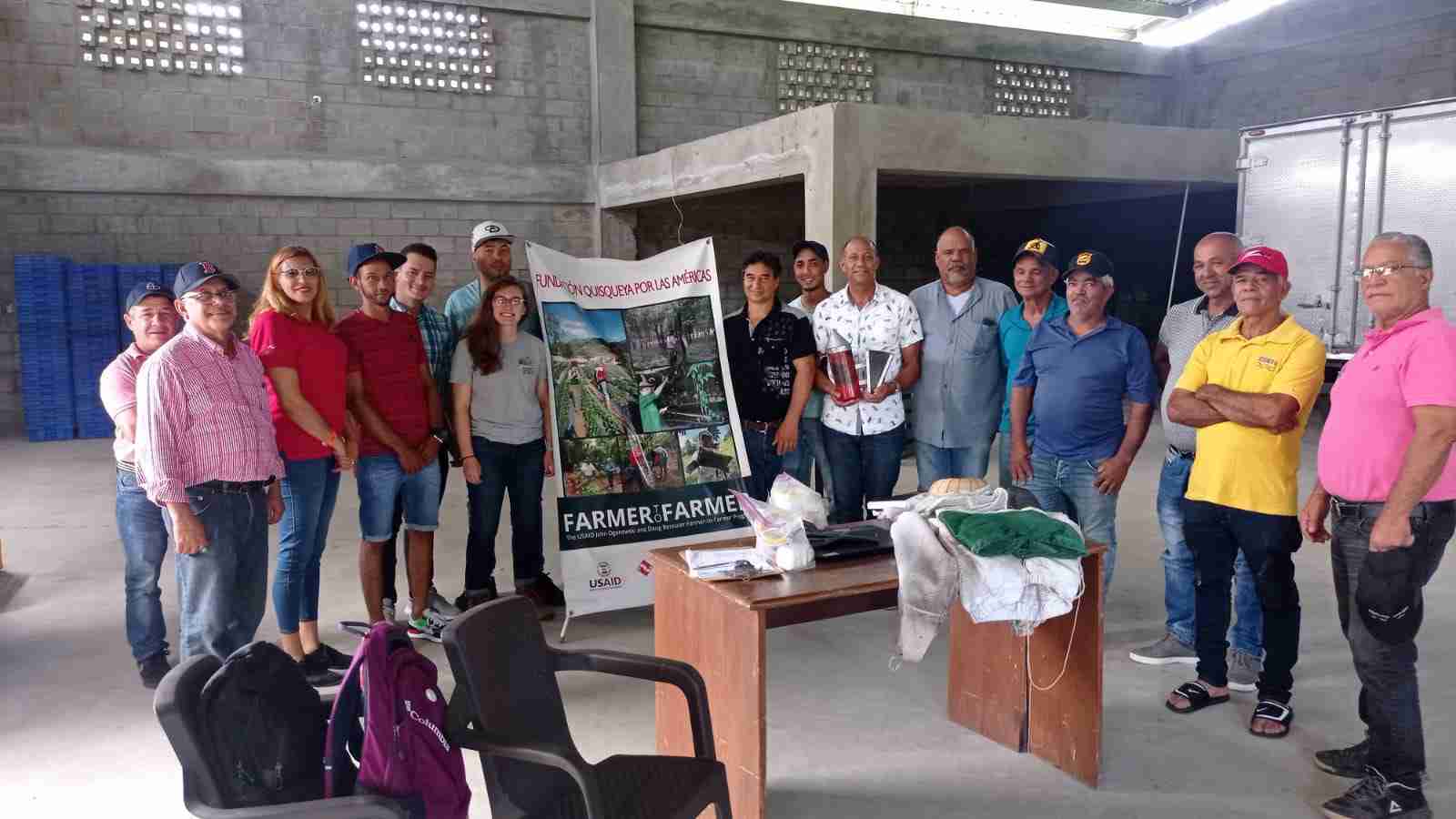 NCDA&CS Apiary Inspector Bridget Gross, center left, stands with a group of farmers and beekeepers in Jarabacoa, the Dominican Republic.

There are few things that connect people around the world like agriculture.

Everywhere people live, and across the thousands of years they have lived there, agriculture has been a foundational part of what makes human civilization possible. The sharing of agricultural knowledge has helped people all around the world become happier, live healthier and uplift their communities.

Recently, NCDA&CS Apiary Inspector Bridget Gross took her beekeeping knowledge to the Dominican Republic in pursuit of this same goal. Gross, who joined the agriculture department in March 2021, has two major facets to her job. The first is regulatory; inspecting apiaries across the state to make sure that laws are being followed and bees are being taken care of properly.

The second part is less about oversight and more about awareness, Gross said.

“In general, we’re just trying to help educate beekeepers and help them with any problems they might have. At the same time, we’re also educating the public and doing some outreach so that they have more understanding of honeybees and their importance.”

That mission is what brought Gross to the Dominican Republic in July. It was the second such trip she had made, the first coming in 2019 when she worked for the University of Nebraska-Lincoln. The trips were administered by Farmer to Farmer, a volunteer group which pulls together experts from around the country to help improve agriculture in developing countries.

In particular, Gross was focused on bolstering strawberry production near the city of Jarabacoa, the second largest municipality in the country’s La Vega province. Farmers in the area were struggling with the size and quality of their strawberry crops, Gross said, in part due to a lack of native pollinators nearby to help the crops grow. The goal for Gross and the others on her trip was to teach the farmers how to move honeybees into the area, while also checking on the general health of the strawberries themselves. The Dominican Republic is by no means devoid of pollinators, and agriculture is a significant part of the economy there. The problems arise in specific areas where pollinators might lack the habitat outside of agricultural land in which to live.

“If there is not appropriate habitat in general for the pollinators, then you’re just not going to have them,” Gross said. “In that case, it might be beneficial to bring some honeybees in to artificially supplement what is in that area.”

Other farms even had pollinators nearby, and were flourishing. In fact, the presence of honeybees elsewhere nearby made it simpler to bring them to areas that didn’t already have them, because it meant that the bees would not be an invasive species that the ecosystem might not be ready to handle.

“There were strawberry farms that I visited that were doing well because they had honeybees nearby. They had other wildflowers, so they had other pollinators as well,” Gross said. “So it’s a little bit different than if we brought in a new species from the United States to the Dominican Republic, then you would have those concerns. But honeybees are already in the Dominican Republic and naturalized similar to how they are in the United States.”

Once the bees are in place, the next step is making sure they’re well taken care of. Beyond just the basics of colony management, Gross also helped teach local farmers how to check for the varroa mite, a dangerous parasite which has become extremely common among honeybees all over the world. To check for them, Gross used a technique called a powdered sugar roll, which involves coating bees in powdered sugar to make the mites fall off and become easier to identify. This method has the advantage of not killing the bees it uses, as the sugar is harmless and other bees will clean it off the ones used in the test.

The trip allowed Gross to broaden her own knowledge. She said she hopes to keep track of how the strawberry crops improve in future seasons.

“I learned a lot more about strawberry production, which is normally a little bit outside my wheelhouse. I’m really interested to see if they do end up moving the colonies in, which hopefully they’re doing right now,” she said. “I’m excited to see and hear back from them if that does actually help improve their strawberry production and the value of their fruits.”

NCDA&CS provides a wide range of apiary services here in North Carolina, and beekeepers who want to have their apiaries inspected can reach out to the Plant Industry division to request one. Visit www.ncagr.gov/plantindustry/plant/apiary/index.htm for more information.