Spotted Lanternfly has come to NC: Now what? 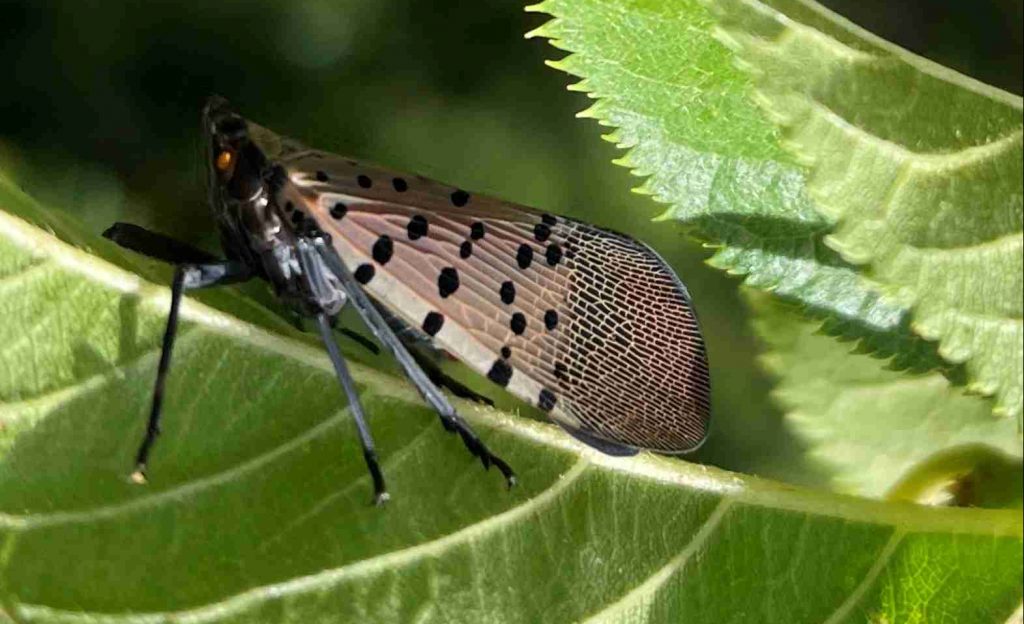 It’s official: the invasive Spotted lanternfly has made its way to North Carolina.

Ever since the destructive pest was found near Kernersville in late July, the NCDA&CS Plant Industry team, North Carolina Forest Service and USDA-APHIS-PPQ have been hard at work surveying and treating for this pest. Spotted lanternfly poses a serious threat to North Carolina’s wine and grape industries and can feed and cause damage on over 70 species of plants including apples, roses, maples and other landscape plants.

Prior to this discovery, the Plant Industry division’s focus was on detecting SLF early enough for it to be managed quickly to prevent spread. Now that a well-established breeding population has been confirmed, the strategy must shift somewhat, said NCDA&CS Plant Pest Administrator Joy Goforth.

“We had a citizen report in Kernersville on July 23, and we immediately deployed a team to investigate and found a large population of late instar nymphs and adult spotted lanternflies. Years. We’ve been fully prepared for spotted lanternfly to arrive in North Carolina, so we were able to react quickly and targeted treatments to control the pest began just five days after the initial report,” she said. “We’ve had dedicated NCDA&CS teams out there surveying and treating every day and plan to continue until fall when the treatments will no longer be effective.  It’s been hard work, especially in the high heat we’ve had recently, but it’s important that we get out there and address the problem quickly.”

Spotted lanternfly was found in Pennsylvania in 2014 and has rapidly spread to 13 states in just eight years. It continues to take a stronghold across the border in Virginia increasing the likelihood that this pest will be found in other locations in North Carolina. The insects are adept at hitchhiking on vehicles, and can lay eggs on any flat surface, making them difficult to track. Goforth said that the population found near Kernersville has been there for an estimated two to three years, which makes it all the more important that Plant Industry stays active in searching for more insects. So far NCDA&CS has surveyed 3,905 acres surrounding the initial reported location for the pest and has successfully treated 1,371 acres, which puts North Carolina in a far better place to combat this highly invasive insect than the previous states who have infestations.

“It is likely that this is not the only established breeding population here in North Carolina. With so many pathways for entry and an abundance of host plants statewide, I believe it has come in and is established elsewhere,” Goforth said. “Although Plant Industry division is surveying known vulnerable potential points of entry for this pest statewide, we need all citizens to be on the lookout as well. This time of year, the insects would be in their very distinctive adult life stage.”

The natural first step in finding spotted lanternfly is to look where their favorite food is found. The insects prefer to feed on Tree of Heaven – itself another invasive species – and Plant Industry has targeted those plants as likely places to find them. Chinaberry is also a preferred host, and our forests are filled with native grapevines which increases the likelihood that spotted lanternfly could be found anywhere in the state.  Later in the summer, however, the adults are more mobile and could be seen anywhere.

In treating the known infested area in Forsyth County, Plant Industry is using the Spotted lanternfly’s preference for Tree of Heaven against them. When survey teams find spotted lanternfly on Tree of Heave, they can follow up by applying an insecticide to the base of the trees, which is then brought up through their trunks and eventually consumed by the lanternflies. Treatment teams also have a contact insecticide than can be used when large populations of lanternflies are found to eradicate them more quickly.

While Plant Industry has many strategies for dealing with SLF, the threat they pose is still very real. Trying to wipe out a pest as resilient and mobile as Spotted lanternfly is no easy task and will take time.

“We plan on work on the Kernersville area to be ongoing, and we know this will not be a one-year treatment,” Goforth said. “This will be a multi-year effort to continue survey, treat and look for pathways this pest could have spread to new locations and follow up with surveys to ensure we are reducing and eliminating those populations.”

As with any invasive species, public involvement is crucial to letting regulators know about potential new populations. NCDA&CS maintains a web page with information on Spotted lanternfly at www.ncagr.gov/SLF, which also includes photos of the insect in its different life stages and an online form for reporting sightings.

North Carolina State University Cooperative Extension has also put together a pair of graphics showing the Spotted lanternfly alongside several common lookalikes to help residents identify SLF, which can be viewed below: 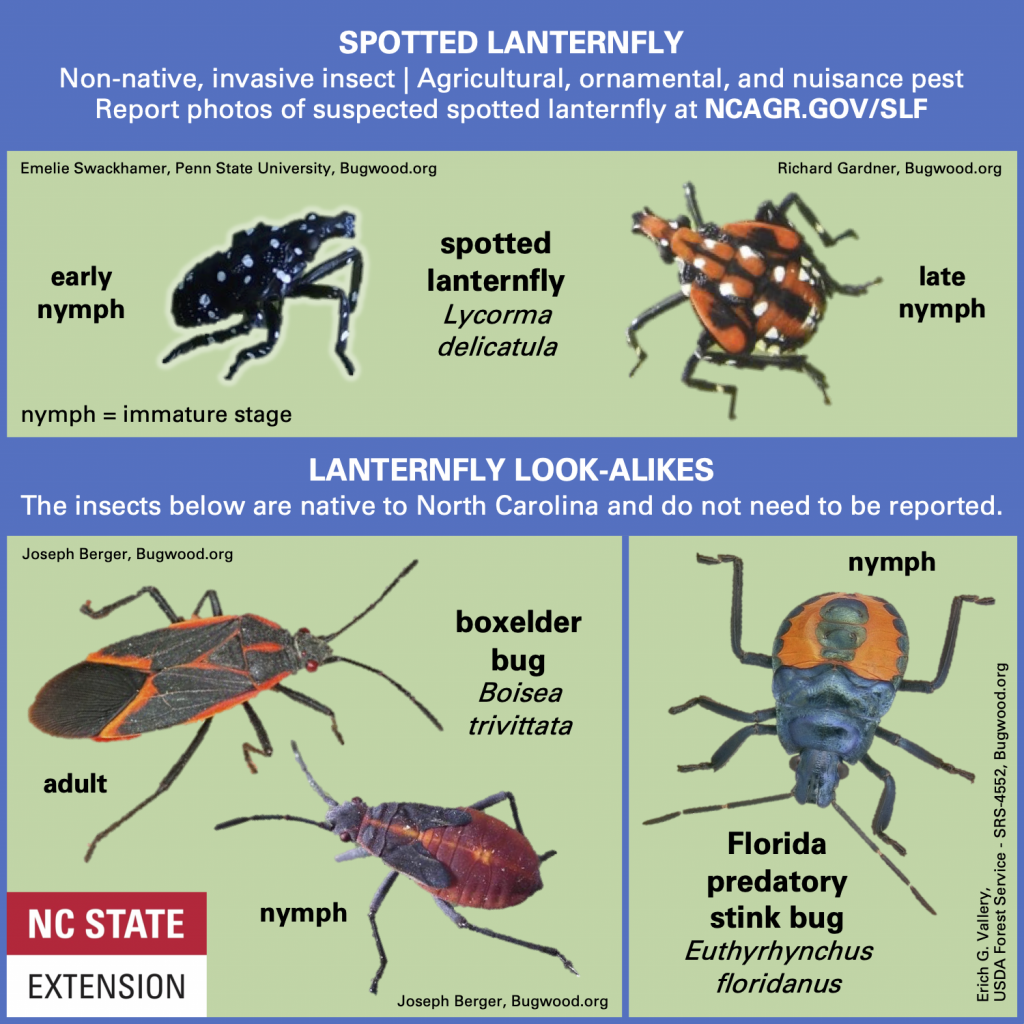 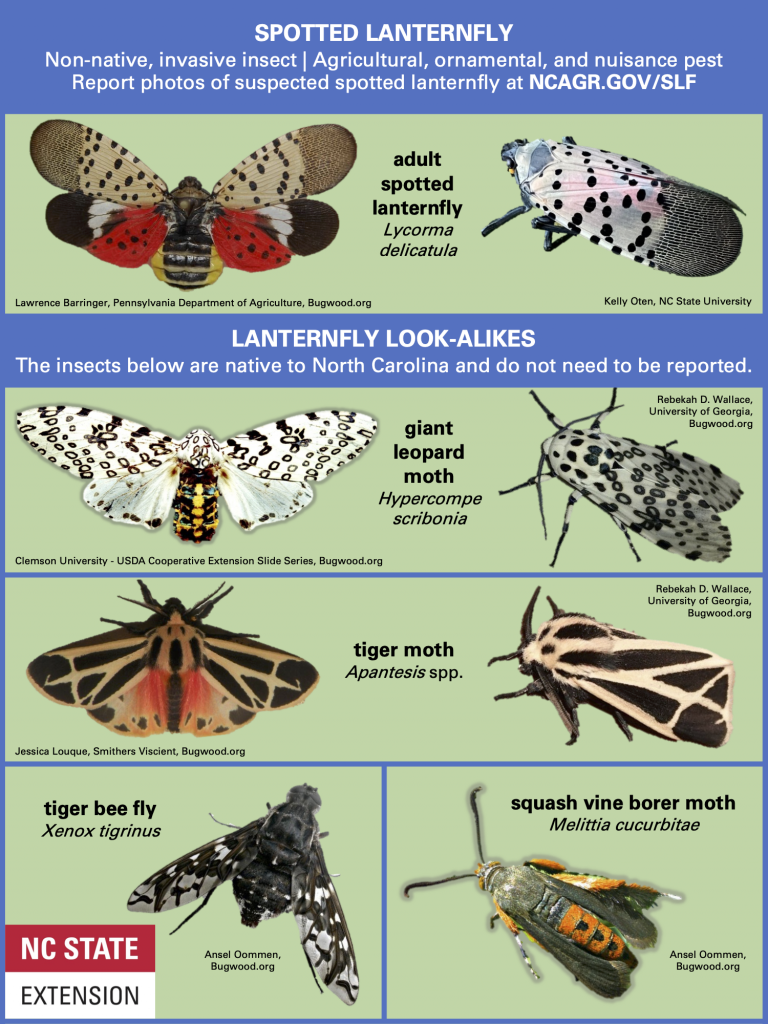 Goforth said she has been encouraged by the strong response from North Carolinians so far.

“We are excited that businesses and homeowners are supporting us in this endeavor. When people realize what we’re doing, almost everyone that we’ve encountered is happy to help us spread the word, and genuinely want to do their part to help eradicate this pest. We believe that the increased media attention has really benefited us, and it’s getting the right information out there to citizens to be on the lookout for.”

For now, Plant Industry inspectors will remain hard at work to locate and contain the Spotted lanternfly. Goforth commended the dedicated Plant Protection and North Carolina Forest Service teams for working through such a large-scale problem in unforgiving circumstances.

“I could not be more proud of the Plant Industry division staff who go out in brutal heat every single day to survey and treat, and then go home and work in the evenings to try to get caught up on all of their other job responsibilities,” she said. “Whether it’s export certification or nursery inspections or the other layers of documentation that we provide so that our agricultural commodities can be shipped anywhere, our staff is still working hard on those as well. We’re incredibly proud of the continued dedication of the Plant Industry and North Carolina Forest Service staff who are collectively working efficiently and effectively at managing this infestation of spotted lanternfly.”