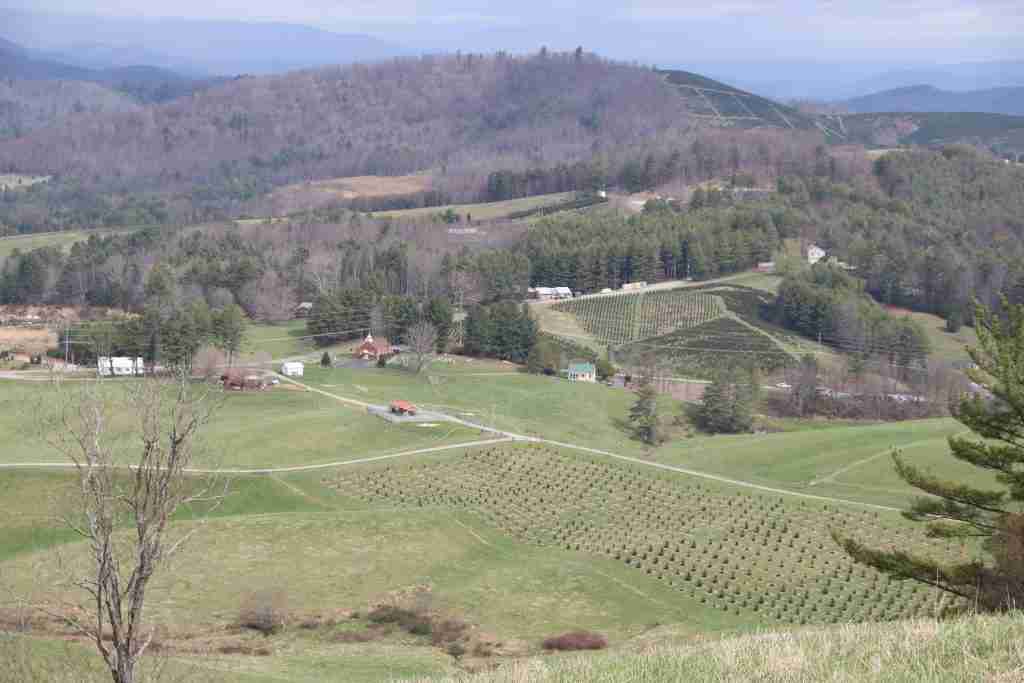 Like any other farmers, Christmas trees growers in western North Carolina are always looking for ways to grow more and better product. One challenge to that effort is a root rot that’s affecting swaths of Christmas trees, particularly the Fraser fir that’s the preferred and predominant Christmas tree variety in North Carolina (Arguably, Fraser firs are also preferred across the nation or at least the eastern half of the country). The name is Phytophthora root rot, and it’s caused by fungus-like organisms in the genus Phytophthora. That may sound fancy or complicated, but the bottom line is that these organisms sometimes called “water-molds” can cause significant damage to Fraser firs.

Phytophthora… infects many woody plants through the roots. It can lie dormant in the soil for several years, waiting for a susceptible host such as Fraser fir and the right environmental conditions, including warm soil temperatures (above 54°F) and saturated soils to infect plant roots. Due to this persistence, once Phytophthora becomes established on a site, the area is typically no longer able to be used for Fraser fir production, making this disease one of the major limiting factors for Christmas tree growers.

from NC State Extension Publication "Management of Phytophthora Root Rot in Fraser Fir Christmas Trees"
“If you’re a Christmas tree grower and you have this problem in a section of your land and you lose 20 percent of your trees, that’s a huge profit loss at the end of the cycle,” said Tracy Taylor, the superintendent of the Upper Mountain Research Station in Laurel Springs.

So Taylor was happy for the research station to host a tree grafting workshop in April in an effort to help tree growers with one way to combat the problem. The workshop aimed to help growers understand the process of grafting Fraser fir scions – the top sections – onto other varieties of fir rootstocks that are more Phytophthora-resistant. Ashe County Extension Director Travis Birdsell led the workshop along with N.C. State Extension Forestry Specialist Jeff Owen and local tree grafting expert Doug Hundley.

“If you can plant something that won’t die, it may cost you more to get it planted, but you can still keep that ground productive,” Taylor said. “The infected land is growing year to year. You can’t just spray for it. If you have infected ground you can’t treat that ground with anything to kill it.”

Several non-Fraser varieties of fir can be used as the rootstock, and the workshop covered resistance, grafting success rates and several other factors to consider when selecting a rootstock. One practical consideration is which rootstock growers have access to, so Canaan fir is often used. It’s not the most resistant to Phytophthora root rot, but it fares better than Fraser fir roots, and it’s more readily available than some other firs. In addition to explanations and statistics, the workshop provided a grafting demonstration and an opportunity for those in attendance to get hands-on grafting practice. The hope is that the workshop helps local growers become more familiar with grafting as a way to increase their land’s tree production. The grafting option isn’t a new idea by any means, but as more land is blighted, interest has grown. Taylor said there are now some companies interested in doing grafting on a large scale. Doug Hundley demonstrates a knife-sharpening technique during the grafting workshop. “But wait! There’s more.” – Taking N.C. Christmas trees to the next level

Thanks to those efforts with genetics, plans are in the works to create a Fraser fir seed bank at the Upper Mountain Research Station. It would be the nation’s only source of certified* Fraser fir seeds – seeds that have been tightly controlled by sourcing only from “parents” and “grandparents” with the most desirable features for both consumers and growers.

Teresa Lambert, the director of the Research Stations Division for NCDA&CS, explained that the hope is to create a source of seeds that’s so refined that Christmas tree growers can pick seeds with the characteristics they want most. For example, they could order seeds from the seed bank to grow trees that have the best needle retention or the best uniformity, a shorter growth cycle or a later “break-bud” time. Lambert envisions it being much like corn seed these days (or many other crops/plants for that matter). Corn growers have entire catalogues where they can pick from corn varieties that are resistant to certain diseases or that have a certain germination and growth schedule. She wants to see those types of options provided by the bank, which she’s tentatively calling the “Fraser Fir Center of Excellence.”

Much of the ongoing Fraser fir breeding program would be based at the center, and it’s safe to say it would provide seeds with the best Fraser fir genetics in the world.

“In the weeds” of getting good seeds

The effort to get the finest Fraser fir seeds possible began mostly with professor John Frampton, Ph.D., of N.C. State University. He retired in 2019, but his work began many years ago. He set out to create a genetic “bloodline” of Fraser firs that would have the ultimate in characteristics such as uniformity, needle retention, disease or insect resistance or even faster growth rate. (Because it takes several years to grow a Christmas tree, increasing the speed of “rotation” or “turnover” time could increase a grower’s income over several years.)

“It’s hard to explain that – a career’s worth of work. He retired, and six or eight years from now we’ll start to see the benefits,” Taylor said. “It’s hard to wrap your mind around that and how long it takes.”

Taylor said Frampton went to all sorts of areas where Fraser firs grow naturally and he got seeds from more than 28,000 trees, which meant he had a lot of genetic diversity from areas near and far. By the early 2000’s, he was growing out those “offspring” into transplants and evaluating them in the nursery and in field trials all across western North Carolina. He then identified the best Christmas trees, ultimately picking only 305 (slightly more than one percent) to graft and plant in a clone bank field at the Upper Mountain Research Station in 2008. His testing for good traits continued by taking seed from those 305 premium trees in the orchard. From those seeds, he grew and tested more transplants and trees.

By 2015, Frampton told Taylor that the research station should start a seed orchard because growers couldn’t easily find great Fraser fir seeds like what he was growing in his 305-tree plot. Few seed orchards existed for various reasons, so seed stock often came from the wild where each tree’s genetics were hit or miss.

To create the new seed orchard, Frampton identified the best 25 trees in his 305-tree plot – roughly the best tenth of one percent of the original 28,000. He then took 45 clippings from each of those “best-of-the-best” 25 trees. Those clippings were then grafted and put in a plot in a different area, creating a seed orchard of 1,125 trees. Even the placement of those grafted trees got scientific with the help of mapping guidance from the Czech Republic, which has the most sophisticated seed orchard software available. Once the time comes, the seed cones will be clipped from the trees so their seeds can be harvested and planted in a nursery. Which tree the seed cones came from will be documented so the seed genetics and tree characteristics can be tracked.

“These trees, we know through our research they hold about 99 percent of their needles after they’re harvested,” Taylor said to provide an example of the benefit. “When you take a Christmas tree out of your house and you see all those needles on the floor, that’s the last impression a consumer has.”

That’s an impression that could be changed once commercial nurseries and growers start getting the seed stock for their operations from the station’s seed bank. Improvements like that have the potential to make Fraser firs even more desirable to consumers and make Christmas tree growing more profitable. Taylor said he hopes the new seed orchard will have meaningful seed production in 2028. Those seeds would go to a nursery to grow seedlings for about two or three years. After that – in about 2030 or 2031 – those seedlings will be ready to transplant. Once planted in a field, the Fraser firs will take about seven years to mature to traditional Christmas tree size. So in about 2037 or 2038, consumers could take home a Christmas tree that can be traced back to Frampton’s research that began more than 40 years earlier.

In the years between now and then, Taylor hopes to have success in fully identifying the male “parents” that pollenate the trees in the seed orchard. He knows they’re dealing with the best of the best, but being able to fully identify both “parent” trees means the seeds’ characteristics can really be honed in on, and growers can get really specific about which seeds they want. The more specific information that can be shared about the seeds, the better growers will be able to make management decisions about their growing operations.

“There’s a lot at stake for the Christmas tree industry,” Taylor said. “I guess I feel the weight of that. John Frampton did his job through his career, and he left it with us. I realize what we have, and I don’t want to mess that up.”

*Certification comes from the N.C. Crop Improvement Association, which would verify the breeding, including things such as ensuring trees were placed to avoid inbreeding and checking to be sure other (non-premium) Fraser firs weren’t close enough to contaminate the desired genetics.