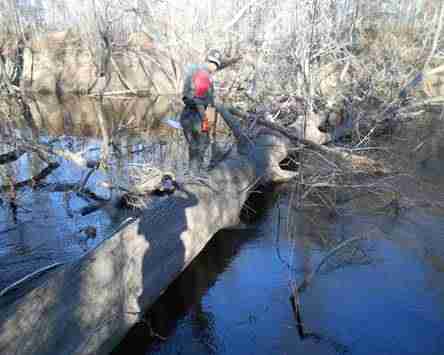 It may be an exaggeration to say Mitch Miller is dreaming of how to spend some of the $38 million appropriated in the latest state budget to help reduce flooding in North Carolina. The exaggeration would only be slight though. As a soil and water conservationist in Cumberland County, he has plenty of ideas about how he could put that money to work to help protect people and property from flooding.

“I’ve got several sites right now that I know we need to spend that money on,” Miller said.

Miller was one of the 250 people involved in soil and water conservation who recently attended the annual meeting of the North Carolina Association of Soil and Water Conservation Districts. That’s when he and others got a full presentation about the funding.

In the 2021-2023 budget bill, the General Assembly allocated the $38 million to create the Streamflow Rehabilitation Assistance Program (StRAP). Lawmakers gave authority to supervise and administer the program to the state’s Soil and Water Conservation Commission, working closely with the Division of Soil and Water Conservation within the N.C. Department of Agriculture and Consumer Services. The stated goal is to help communities in “protecting and restoring the integrity of drainage infrastructure through routine maintenance to existing streams and drainage ways.”

The legislation covers these three main ways to protect and restore streams and waterways with maintenance:
• clearing debris or sediment that has caused blockages
• stabilizing and restoring streams and streambanks
• rehabilitating or improving certain small watershed structural projects that were previously constructed “pursuant to the Watershed Protection and Flood Prevention Act of 1954, as amended.”

“This is a monumental step to help us prevent future flooding,” said Agriculture Commissioner Steve Troxler in a press release. “While we have previously secured federal and state money to clear debris from waterways after flooding events such as hurricanes, those efforts were reactive approaches that were part of disaster recovery funds. StRAP now allows us to be proactive in clearing waterways so we can hopefully reduce flooding and protect people’s property before the next big flood event happens. I’m grateful that the General Assembly understood the need for this program.”

David Williams, deputy director of the Division of Soil and Water Conservation in NCDA&CS mentioned that multiple disaster recovery funding bills from 2016 to 2019 set aside a total of $49 million for stream debris removal. That money could only be used in counties that were declared disaster areas from specific events. He also mentioned that there has still been a need for more stream debris removal, particularly in a proactive approach.

“There will still be remaining unmet need [even with StRAP],” Williams said. “I wouldn’t be surprised if we get 50 to 80 million dollars worth of requests.

“If we get another Florence, StRAP won’t eliminate flooding, but it should reduce flooding because when you get 30 inches of [rain] water it’s got to go somewhere, and of course it’s going to go where the low-lying areas are. StRAP is going to address those issues where pre-existing debris got the [waterway] blockages started and just got bigger because of the additional debris load that was added. If we can get that pre-existing debris out of there, the stream channel will be better able to handle the extra flow that comes from the extra rain.”

Williams also explained that floods that have been worsened by debris blockages aren’t just a concern for property but also for people’s safety. For example, when remnants of Hurricane Eta in 2020 and Tropical Storm Fred in 2021 brought heavy rain to parts of North Carolina, debris blockages held back water from moving freely down drainage ways (e.g., rivers, creeks or other streams). So with water held back, areas upstream flooded worse, and when some debris blockages gave way, a surge of water was released downstream with devastating results.

“Much of what we saw in Eta and Fred came from pre-existing debris that created a blockage, and that blockage ultimately gave way, and then there was a wall of water just like a dam breaking.

“That’s a major concern with pre-existing debris. It just makes situations much more hazardous with the surge,” Williams continued.

According to a National Hurricane Center report, “there were seven direct fatalities due to Eta in the United States, all drownings due to flash
flooding in North Carolina. …In Alexander County, five persons ranging in age from 1 to 76 drowned at a campground, and a 64-year-old man was killed when he drove his vehicle onto a collapsed bridge. An 11-year old child drowned in flood waters in Wake County.“

Miller was particularly interested to hear that the StRAP funding could help continue, expand and/or partially pay for some debris removal work already underway or identified as needed in Cumberland County. Again, he already has several potential projects in mind.

“I think it’s great,” Miller said of StRAP. “I think it’s a good way for the Division of Soil and Water and the local soil and water conservation districts to partner up and work together and get this money spent in a timely manner. It’s going to take a team effort to get all of it done.”

Williams admitted the timeline for the program is a challenge. Since the budget wasn’t approved until mid-November, it only leaves about a year and half to get $38 million worth of projects identified and completed or at least under contract. Since the money has only been set aside for the 2021-2023 budget, there’s no guarantee that the funding will be continued past the end of June 2023.

For now, Williams and others in the Division of Soil and Water Conservation are trying to get the word out to any local entity that may qualify and have ideas for projects. There is a webpage dedicated to the program, and there have been two online Q&A sessions, with others possible. More details can be found on that webpage at www.ncagr.gov/SWC/watershed/StRAP.html