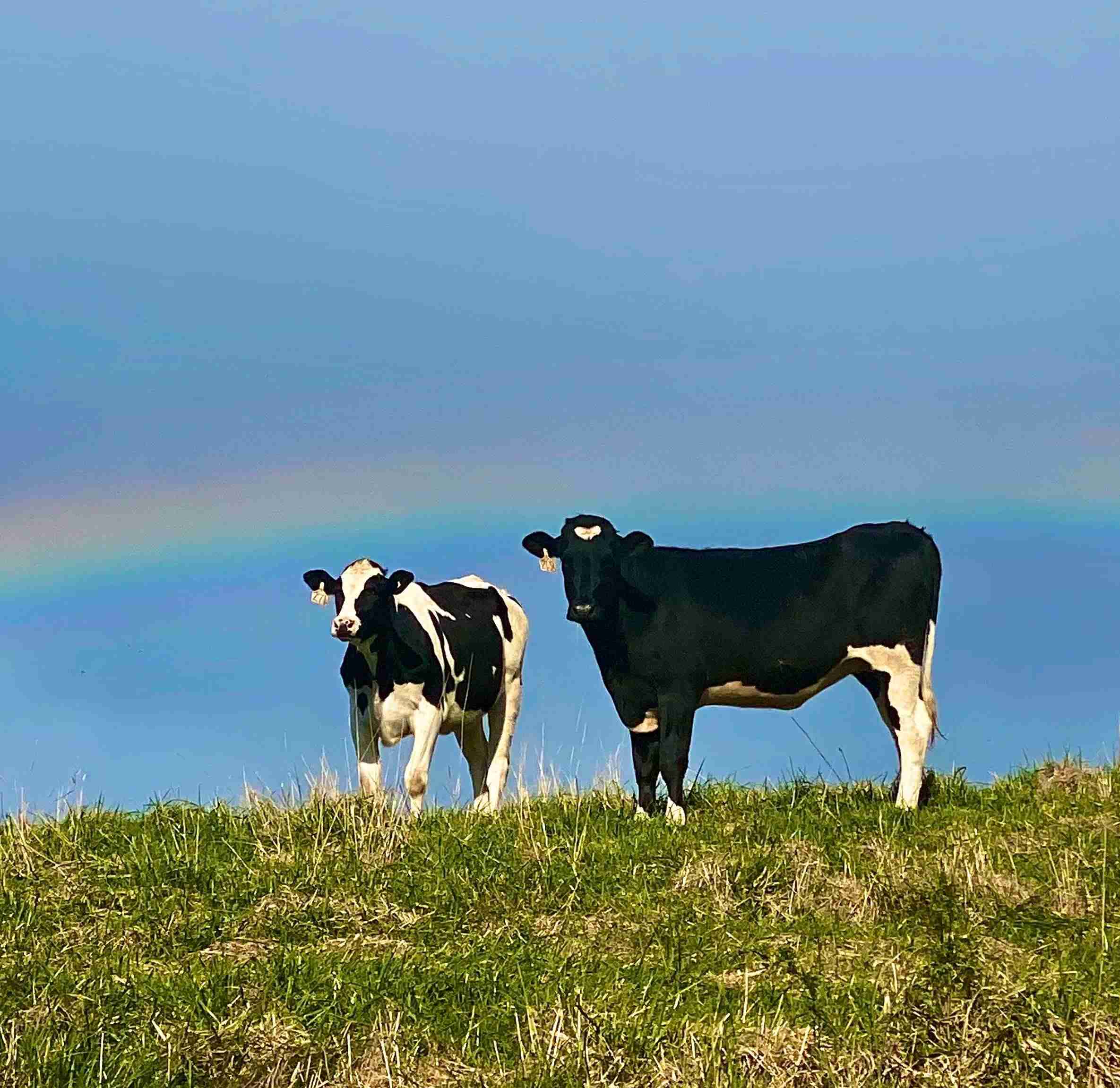 Whether you’re familiar with modern day cow breeding practices or not, you’d be tempted to call a new effort at some of the state’s research stations “next level.” The idea isn’t exactly brand new, but it certainly hasn’t been around long enough to be called “old” yet either.

In fact, this new experiment at the research stations uses the same techniques that are common in human fertility procedures. By now, most people are familiar with the idea of a human surrogate mother. Well, in this new effort, the surrogate is a dairy cow.

The basic idea is to breed some of the dairy cows so that they produce beef offspring. There’s a lot more to it, but yes, you read that correctly. Next level, right?

Again, the process to create human surrogates is well established, and it has been a growing practice for some dairy operations in recent years. Implementing it at the research stations is definitely experimental and ambitious. For Teresa Lambert, the director of the NCDA&CS Research Stations Division, it seems to be a reasonable thing to at least try. Several months ago, she got to thinking it was about time the research stations gave it a shot.

Her goal was to simply try to increase the value of certain cow offspring. That could mean returning more money to the state’s research stations to support projects aimed at helping farmers. In December, the first effort at dairy cow surrogacy was started, and now Lambert and others are evaluating the initial results to figure out what’s next

The goal of having dairy cows produce beef offspring is to increase the value of the calves that are born. In short, a dairy only needs a certain number of dairy cows to maintain operations at a certain size, so there’s always a “surplus” of calves born. If the calves born are a beef breed instead of a dairy breed, they’ll have a higher value for being sold or processed. Right now for example, a male/bull dairy calf is valued at about $5 to $15 compared to a beef cow that could draw closer to $2,000. (For a more detailed explanation see the note at the end.*)

“So it makes sense to me to see if we can have more calves with a significant value,” Lambert said.

The way to get a beef calf from a dairy cow is to use beef cow embryos. The idea is to transfer beef embryos into the dairy cows that aren’t needed to reproduce more cows for the dairy operation. The beef embryos that were transferred into dairy cows in December came from beef heifers that had their eggs fertilized by artificial insemination (a common breeding method in managed cow herds). The resulting embryos were frozen and then used in the first run of this new breeding experiment. A total of 13 frozen embryos from the registered Black Angus (beef) herd at the Upper Piedmont Research Station in Reidsville were used. The embryos were thawed and transferred into 13 Holstein (dairy) cows at the Piedmont Research Station in Salisbury. Check-ups in January showed the process resulted in two pregnancies.

“The first question was ‘can we get any pregnancies?,’” said Joe French, PhD and superintendent of the Reidsville station. The future plan is to create Black Angus embryos with in vitro fertilization (combining beef sperm and eggs in a test tube or culture dish in a lab).** The lab-fertilized beef embryos would then be transferred to Holsteins at the station in Salisbury. That in vitro fertilization process would be overseen by N.C. State University professor and researcher Thiago Silva, veterinarian and PhD, who has a specific interest in studying in vitro fertilization with cows.

An accidental jumpstart
Silva’s accidental visit to a research station actually helped Lambert get her idea going. Months ago, Silva set out to visit the Upper Piedmont station and talk to French about some research possibilities. Instead, he ended up at the Piedmont Research Station in Salisbury where he found a different Joe – former station superintendent Joe Hampton who now serves in a different capacity with NCDA&CS. So Hampton talked to Silva about the dairy herd and introduced him to the folks in the dairy unit. While Silva had thought his research may focus on only beef cattle, his visit to the dairy opened him up to more possibilities.

It was a happy accident that brought the perfect academic researcher to the right place at the right time. After more discussion and planning, Silva oversaw the placement of the 13 Angus embryos into 13 Holstein cows in December. In vitro fertilization will continue to be the normal way to get embryos for the breeding program, but there are lots of other logistics to figure out moving forward

“I don’t know yet what will be the normal operating procedure,” said French, whose doctorate degree is in reproductive physiology. “These are questions we’re asking each other.

“If we can develop a program where our dairy cows don’t just produce milk and $5 calves but instead produce milk and calves with a value maybe around $2,000, why wouldn’t we?” French continued. “Maybe if we develop the techniques and do the research it may help other dairy farmers implement this in their own operations. Will it happen? At this point, I really have no idea, but I’m hopeful.”

Research/education/training potential
While Lambert was simply looking to increase the value of many of the dairy cows’ calves, she’s learned there could be some research payoffs, too. Young dairy calves at the station in Salisbury are monitored with robotics [link to previous blog] that measure weight, amount of food eaten, growth patterns, feed intake, etc. The beef calves born to dairy surrogates will be monitored the same way. Then they’ll move to the station in Reidsville where they’ll continue to be monitored for feed efficiency. Essentially, their entire lives will have associated data

“The poultry industry has done a really good job with feed efficiency research, and the beef industry is a bit behind,” Lambert said. “Having a full lifetime of data for beef cattle could help improve the beef research.”

Lambert also sees some possibilities for more involvement from N.C. State’s veterinary school students. The breeding and subsequent health monitoring could create some new learning opportunities for those students and give them reasons to have more regular hands-on experiences at the research stations. The program could also present possibilities for some research station staff.

French also sees some exciting opportunities. Providing some financial benefit for the state-supported budget is enough reason to give it try, and he also knows there could be some benefit for dairy farmers. He thinks it’s the kind of thing that’s perfect to try at a research station.

“This is definitely new for us, so there are lots of unanswered questions, and it’ll be a while before we have answers that could help farmers,” French said. “But if you’re going to try something really experimental, you want to do it at a research station because as a farm you usually can’t afford to gamble and stick your neck out,” French said. “If you’re going to have a failure you want it to be at a research station.”

*In dairy operations, dairy farmers make money from milk. So the ultimate goal is to have the best dairy cows that can produce the best quality and quantity of milk. So these days, specific “sexed semen” is used to ensure about 99 percent of the offspring are female calves. While just about all the females in a dairy herd are used to produce milk, only about 30 percent of them need to produce offspring to replace the dairy cows that move out of milk production. So the 30 percent of the herd that is the genetic best is all that’s really needed to reproduce more dairy cows. The remaining 70 percent still need to give birth to produce milk, but all their offspring aren’t needed to keep the dairy operation the desired size. That’s where having beef offspring instead could be a benefit. The 70-percent group would still produce milk but would give birth to more valuable beef calves. If a male (bull) calf happens to be born, its value is the lowest of all – no potential for milk and not ideal for meat production. Even when sold to be used for meat, a dairy bull calf has a value of about $5 to $15 because of their body structure, Lambert said.

**Embryos created by in vitro fertilization will be put into the dairy heifers that aren’t top-30-percent genetically, and the heifers would carry each one until birth. When each calf is born it’s an Angus beef calf that came from the womb of a Holstein dairy cow. The mother still produces milk, and meanwhile the female cows born to the top-30-percent cows help continue the preferred genetic quality.