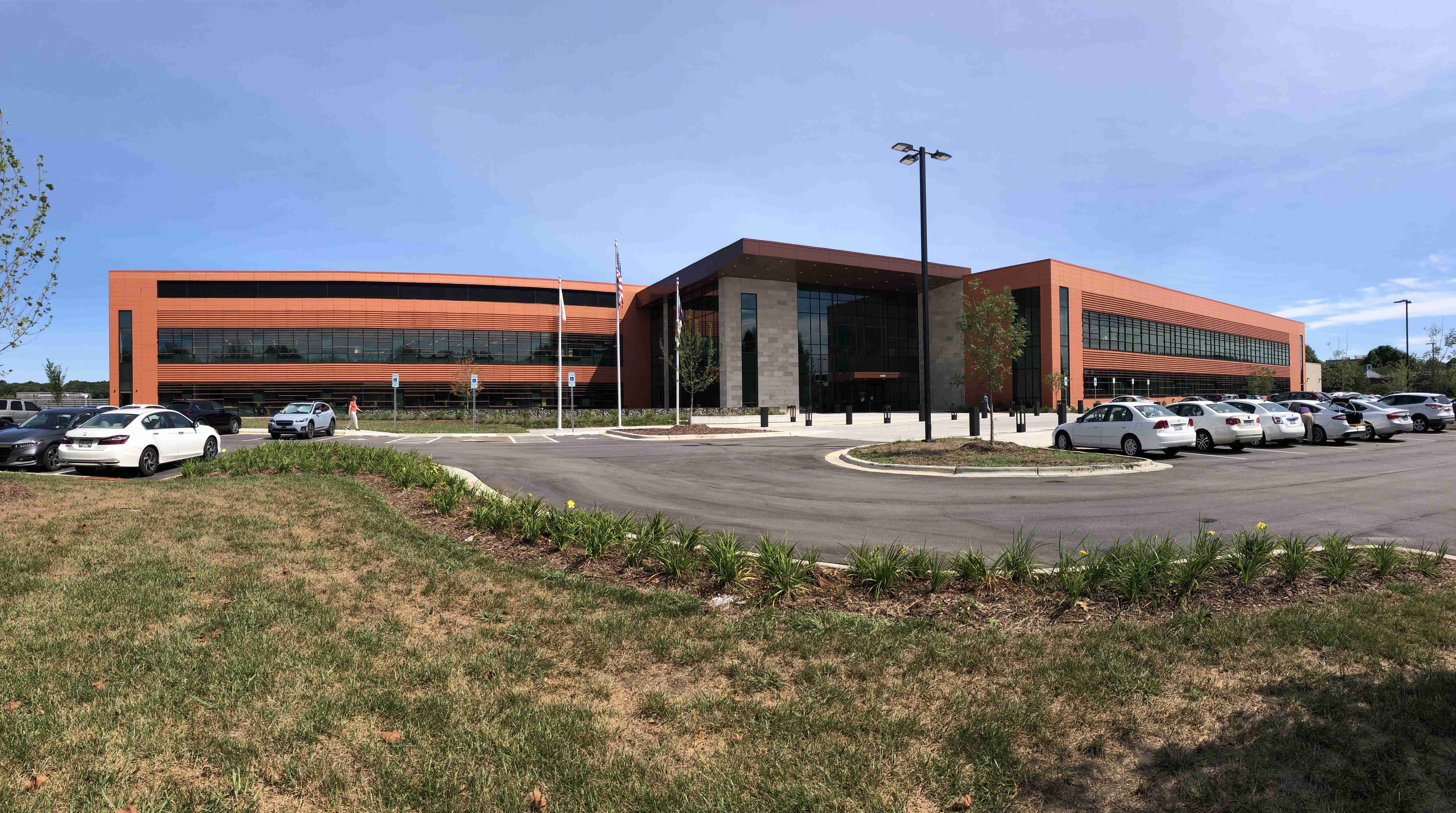 The move-in at the new Steve Troxler Agricultural Sciences Center is now complete. So, the settling in is well underway.

All or part of four NCDA&CS divisions now call the 225,000-square-foot building home. It contains offices and labs for the Food and Drug Protection, Standards, Structural Pest Control and Pesticides, and Veterinary divisions. (The Veterinary Division is the only division in the building that still has offices elsewhere also.) Here’s a list of what’s moved into the new building:

The move to the new building was a huge undertaking. Dozens of truckloads of equipment had to be moved in – files and office supplies, to lab equipment big and small. Four different moving companies helped the divisions move from their previous locations into their new spots inside the building at 4400 Reedy Creek Rd. The highly sensitive lab machinery needed special care to move. Special packing, careful movement and recalibration in the new location ensured that the equipment is working with precision in the new space.

The new building is a centralized location for all sorts of NCDA&CS activity, including fuel quality testing, animal disease diagnostic testing, necropsy services for livestock and companion animals, antifreeze testing and weights and measures calibration. The labs in the building will also serve as the state’s primary location for testing food products for E. coli, salmonella, listeria, pesticide residue and other pathogens. The four previous lab locations (two in Standards, one in Food & Drug Protection and one in Veterinary) had an average age of more than 40 years. The office of the Structural Pest Control and Pesticides division – the Ballentine Building – was 47 years old. It was originally completed in 1974 as the Agronomic Services division lab. It was lightly renovated in 1994 to 1995.

While the new labs inside the Agricultural Sciences Center are obvious upgrades, all the other spaces are serious improvements too. There are common/shared areas throughout the building that serve as collaborative spaces and improve general function – spaces such as a large classroom or meeting hall, conference rooms across the building and a large break room/cafeteria. Lab space and office space is separate so employees don’t have office items cluttering the labs. The dedicated office space is functional and upgraded to provide the proper space for office work as well.

Jim Burnette, the director of Structural Pest Control and Pesticides, said the division’s employees were previously in relatively cramped quarters. For example, one employee’s office was converted from what was originally a storage closet. Another example was the Pesticide Disposal Program and the Sleep Products Program that were based in a circa 1940s bungalow down a hill from the Ballentine Building. (It became known as “the Annex” for the division. It is purported to have been home to the warden at the old Polk Youth Center on Blue Ridge Road. It was never renovated.) Space was so limited, the files for those programs were stored in the home’s kitchen. Burnette is happy to now have a full room for the division’s filing library, plus more file cabinets and counter space in the main office area to help employees process files.

“These will be the working files, like when our pesticide registrations come in, and when all the license renewals come in,” Burnette said, referring to the file cabinets in the shared office space. “Those files will be put in here until they’re processed, and then they’ll be filed in the big room. That’s a nice thing that we didn’t have [in Ballentine]. Everything was all crammed together.”

Lighting is also better. Since Ballentine was originally a lab building, many windows were high and wider than they were tall. The new building provides a nearly floor to ceiling glass wall that floods the office with natural light.

“One thing Commissioner Troxler was adamant about from the very beginning was that these spaces were to be designed with our employees’ comfort and ability to do their jobs first and foremost,” Burnette said.

He called the space not only nice and new but truly “workable.” The division’s employees no longer have to make due with decades-old buildings that needed to be retrofitted to meet their current needs.

“I’m someone who likes an organized and clean space, so this has been really lovely because we have this nice new space to work in,” said Sydney Ross, a pesticide operations specialist.

Burnette said Pesticide Board meetings and Structural Pest Control Committee meetings would be held in the building’s large classroom, as well as licensing exams and technician training classes. The division previously needed to rent meeting space wherever it could find it on meeting dates – usually the Martin Building on the state fairgrounds, but sometimes other places such as the N.C. Museum of Art, which was once the only available meeting space that could be found in the area on a particular date.

The classroom is already booked by another division on the date of the next pesticide meeting in November. It’s a sign that the 200 people now calling the building home have brought it to life with activity. The Center now houses more disciplines of science than any other state laboratory in the country.