A day in the EOC: My introduction to emergency response

The day starts off a bit earlier than usual, but not by enough to justify the complaining I want to do about it.

It’s alright though, because to be honest I am excited. I’m heading to the State Emergency Operations Center this morning to be part of a mock nuclear disaster exercise. This involves simulating an emergency at a nuclear power plant to test the state’s response system, of which the North Carolina Department of Agriculture and Consumer Services is a part. I’m a Public Information Officer – no HAZMAT suits or Geiger counters for me unless something has gone apocalyptically wrong – but I do have an important role to play on my team and I’m admittedly a bit nervous about it.

That’s not to say I’m unprepared. My background as a newspaper reporter has given me a basic understanding of how this process works, but I don’t have experience in emergency management. That’s why I’ve spent weeks studying and training to get ready for this specific exercise. I’ve learned all about the JIC, the JIS, NIMS and how much I hate acronyms. I’ve even stumbled my way through a mock exercise once already just to get a feel for it. But this one is the real deal, with emergency management experts from across the state government all gathered at the EOC and federal evaluators taking notes on our performance.

After passing through the security checkpoint at the front gate, I arrive at the National Guard Headquarters, which houses the EOC. Bruce, a colleague who had mentored me through my training, meets me on the basement floor where the EOC is to give me the grand tour. He first shows me the main meeting room, a large open space dotted with desks and a wall covered with impressive-looking screens showing equally impressive-looking information. We walk around the hallways, and I recognize the press room where Governor Roy Cooper holds his frequent coronavirus briefings. From there Bruce takes me around to the different agencies we’ll be working with. These are the people responsible for the many logistical and operational challenges of an emergency – to put it simply, they know what’s happening, where it’s happening and what we’re going to do about i

As the Ag Department’s resident PIO in the room, it’s my job to help communicate that information to the public. I’m working with a team from the NCDA&CS emergency programs division, along with a separate team of PIOs from both other government agencies and the counties affected by the emergency. Together, the PIO team will coordinate and approve press releases so that everyone is on the same page and the public gets the most up-to-date information no matter where they are. That sounds like it might be difficult to coordinate especially given social distancing measures, but from my end it essentially amounted to us all talking over a conference call for a few minutes, reading over and then typing “APPROVED” on a press release and then repeating that process several times while frequently reminding everyone that this is all a drill.

I don’t describe it this way to undersell the hard work being put in. Rather, the reason this exercise seems to go by smoothly – dare I say easily – is because of the exacting preparation that has been put in ahead of time. Press releases for dozens of common scenarios like livestock sheltering and pet evacuations are already templated and ready to have specific information plugged in, and can be quickly edited to reflect the unique facts of each incident. Few substantial edits were ever necessary, and when they were the changes were quickly identified and made immediately. The conference line system lets PIOs work together in real time, and everyone in the EOC itself is close enough that anyone who needs information can walk over and talk to the right person without fuss.

The exercise ramps up steadily throughout its approximately eight-hour run time, covering all four nuclear emergency classification levels. The first is known as “Notice of Unusual Event,” which roughly translates to “something weird has happened.” This could be essentially anything out of the ordinary – a fire in a trash can could trigger this stage – and is the first level that prompts emergency management personnel to be at the ready.

From there, we are given periodic updates about the status of the McGuire Nuclear plant, the subject of our exercise. In our drill, an electrical failure has created a potentially dangerous situation at the plant, with a possible and later confirmed radiation leak. The classification moves up to “Alert,” then “Site Area Emergency” and finally to “General Emergency,” which denotes that the plant has either suffered or is about to suffer significant core damage or that staff cannot gain control of the facility. 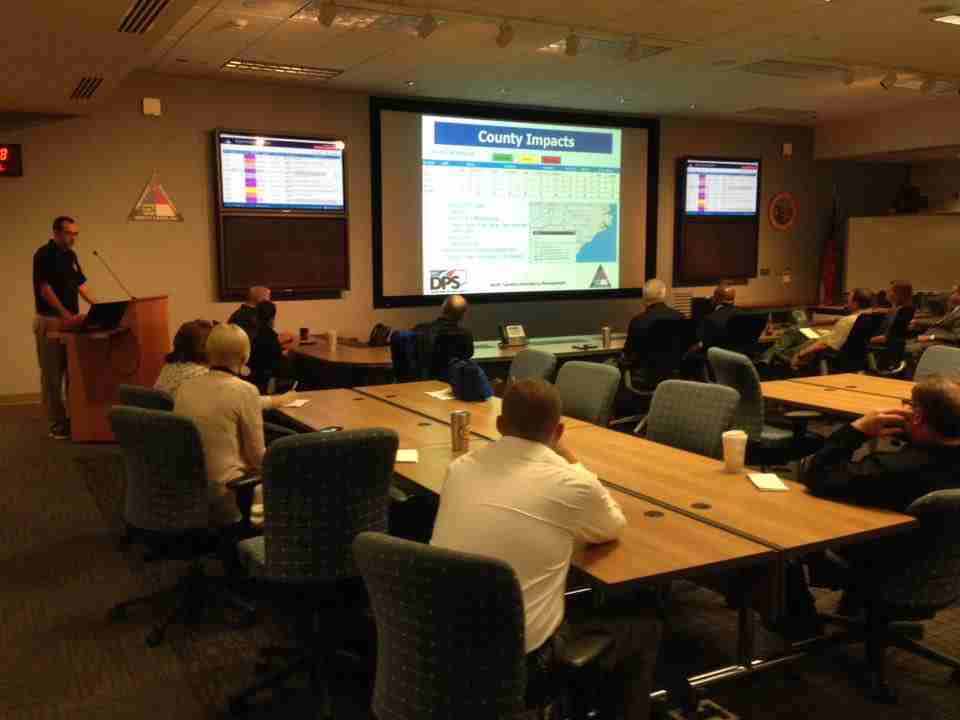 It apparently also causes several screens in the EOC to turn bright red as a warning, which I admit was an unexpected jolt of adrenaline when I walked into the main room for a briefing.

Almost before I know it, the exercise is over. We all gather in the briefing room one last time, where our FEMA evaluators give us their thoughts on what they had observed. I sit with my team, feeling for all the world like a high school student waiting to see if I’d passed an important test. As it turns out, there was nothing to worry about. We get rave reviews from our observers, who compliment us on our teamwork and efficiency. I know this is my first time as part of this team, and my role is small, but I can’t help but feel a little surge of satisfaction at the results.

More than anything, I’m left with an appreciation for what these emergency management experts do day in and day out. Disaster response is a strikingly complex thing to do, bringing together agencies from all over the state to delegate information and resources where they are needed at the drop of a hat. Real disasters don’t give you their date and time months in advance – they can happen at a moment’s notice with little to no warning. Being able to stand up and operate something as complex as the EOC in that kind of time frame, while still in the middle of a real emergency, is a remarkable feat. It’s a testament to the diligence of North Carolina’s emergency response experts, and it’s something I’m proud to have some small part in.