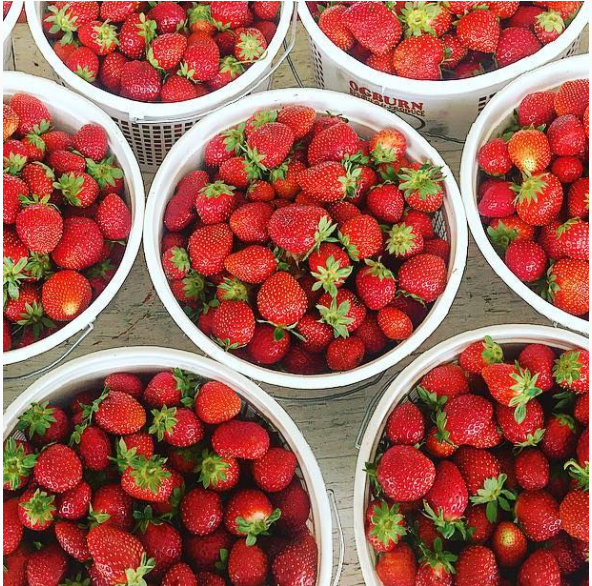 The farm was bought in the early 1900s by Sim’s great-grandfather, Simeon Lloyd Ogburn, from whom Sim gets his name. The farm has remained within the family ever since. Sim, his father and grandfather have all grown up working on the farm. For a long time, tobacco was the primary crop. They also grew sweet potatoes, soybeans, small grains, and also raised some beef cattle.

As a kid, Sim loved being with his dad out on the tobacco farm. He remembers riding the sprayer with his dad and helping baby calves stand up to get their first dose of milk. In fact, he loved being out on the farm so much as a kid that his punishment for misbehaving would be to stay inside because everyone knew he would rather be outside.

Sim returns to the farm

When Sim took responsibility of the farm after graduating from N.C. State University in 2011, he decided to transition from primarily growing tobacco to growing strawberries and vegetables. This decision was made in response to the increasing number of housing developments popping up around the Willow Spring and greater Johnston County area. Sim figured it would best for the farm to sell something all these people could eat and enjoy.

A typical workday during the prime of strawberry season is a long, hard day. Sim is up with the sun, ready to pick strawberries and other in-season vegetables. Then it’s on to the other tasks that need to get done such as planting and fertilizing summer produce, feeding hay to cows or hauling hay to different pastures.

Sim’s favorite part of working on the farm is that no two days are the same. There is constantly a challenge to adjust to. This unpredictability keeps life exciting, but it also requires flexibility and a strong work ethic.

“I’m pretty tied to it. It’s all I’ve ever known,” said Sim about his responsibility in carrying on the family farming business.

Sim is proud to own a Century Farm because he is honoring his family’s history while also continuing the family legacy. He is proud to know he is providing for others just like former generations did.

“It’s pretty neat knowing that I’m working the same ground that my great-granddaddy, who I’m named after, worked.”

What to buy at Ogburn Farm

The farm sells all its in-season fruit and produce on site. In the summertime, Sim sells fresh fruit like watermelon, cantaloupes, blueberries, blackberries, and peaches, among others. Other produce includes squash, zucchini and cucumbers.

In addition to fresh fruit and produce, the farm also sells a variety of other products, including jarred goods like local honey, preserves and pickles. Occasionally, visitors can also find locally sourced peanuts, floral arrangements and ice cream from Maple View Dairy.

The farm also offers some “pick-your-own” experiences. You can pick-your-own strawberries during strawberry season which runs from mid-April to mid-June, and in the fall, there is a pick-your-own pumpkin patch.

The best way to know what Ogburn Berries & Produce is currently selling is by following its Instagram and Facebook accounts. You can also check out their website.

Farming has taught Sim many lessons, but he says one of the biggest lessons he has learned is how to plan ahead. He has learned the importance of strategizing and being proactive, but he has also developed the work ethic that it takes to get up every morning, go out, and simply get things done. He takes a lot of pride in his work, and he hopes to one day leave behind a legacy that is marked by hard work and thoughtfulness. He wants to be remembered as someone who was diligent in their work and strategic about how they went about things.

2020 marked the 50th anniversary of the NCDA&CS Century Farm Program. Century Farm Families will gather at the 2021 N.C. State Fair for a reunion. Less than 2,000 families across North Carolina can say that they have operated a family farm for 100 years. Applications to join the Century Farm and Bicentinial Farm programs are online: https://www.ncagr.gov/paffairs/century/index.htm