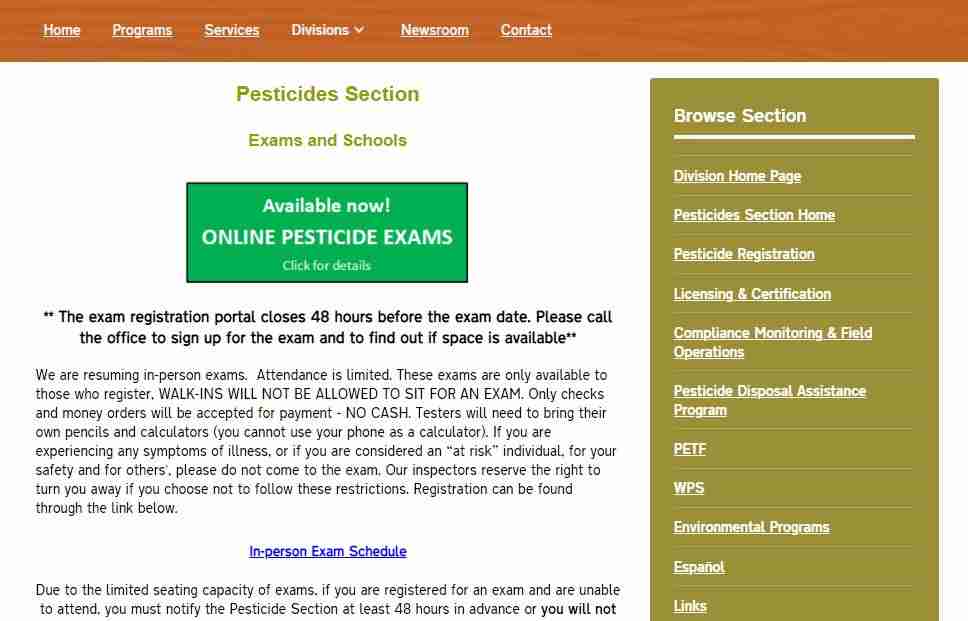 The COVID-19 pandemic changed many things for people in all walks of life, and one of those things has been the licensing testing related to pesticides in North Carolina. During the pandemic, a significant effort was made to move the testing online, and it seems the change is here to stay – at least for those who want it.

Proper pesticide applicator certifications and/or licenses are required for many North Carolinians, including farmers and landscapers, pesticide dealers and even certain groundskeepers in parks or other public spaces. So the effort to keep them legal and get testing moved online during the pandemic took on a sense of urgency last spring and summer because pesticide classes and tests could no longer be done in-person in indoor venues.  That work earned several division employees the department’s Excellence in Team Accomplishment award.

John Feagans, who manages licensing, certification and outreach for the division, said the online option certainly has remained a popular option, but it’s not yet close to replacing the in-person testing option. So far this year, 2,037 people have taken in-person exams. 1,202 people have registered for online exams, indicating their intention to do online testing. Since the online testing option started in mid-March, 472 online exams have been taken.

Feagans explained that the division leadership chose North Carolina-based company Everblue to handle the online system and provide the exams. Anyone choosing to take an online exam must pay a $23 convenience fee in addition to the standard cost of each test that’s also in place for in-person exams. The convenience fee goes to Everblue to cover the cost of maintaining the system and monitoring the testing.

The test monitoring is robust. Each test taker must use a desktop or laptop (no tablets or mobile phones) for the testing with a video camera and microphone to record the testing session. The test taker must pan the camera around for the surroundings to be evaluated, and the video from each testing session is reviewed by a human test proctor. The visual review helps ensure test takers aren’t using anything they shouldn’t during the test, such as information/training manuals or the internet.

“If there’s ever an issue with the testing, we get an email from Everblue. They send video clips of what they’re referring to with an explanation from the proctor. We can then decide what to do, such as exclude exam scores. We can even suspend someone from online testing,” Feagans said. “We have a pretty low tolerance because it is new, and we don’t want anyone figuring out a way to cheat the system.”

Earlier this year, there were still capacity restrictions for in-person testing, which prompted many people to turn to the online option, Feagans believes. Even with things getting back to normal, there are still a limited number of testing sites and dates. Test takers have to drive to those sites, take the test and drive back. For many, that takes at least half of a workday. For companies that send several employees to a testing site at once, it can have a major affect on staffing for that day. So the convenience of online testing is a significant appeal.

“I think it will eventually far exceed in-person testing,” Feagans said, also adding that it will be naturally more appealing to a younger generation. “We’ll always have paper exams, but we in the division also wouldn’t mind having fewer in-person exams sites. It would free up our inspectors to be out in the field more doing the enforcement work that’s important to our state.”

Those field staff members have traditionally needed to dedicate several days each month to proctoring in-person tests across the eastern or western parts of the state (depending on where the inspector is based). Two pesticide specialists based in Raleigh also need to dedicate days to proctor in-person testing.

Testing information is available on the division’s Pesticides Section webpage. Click the green box for more details about online pesticide exams and a link to register for testing. Currently, online testing is not available for anyone seeking a license through the Structural Pest Control Section.