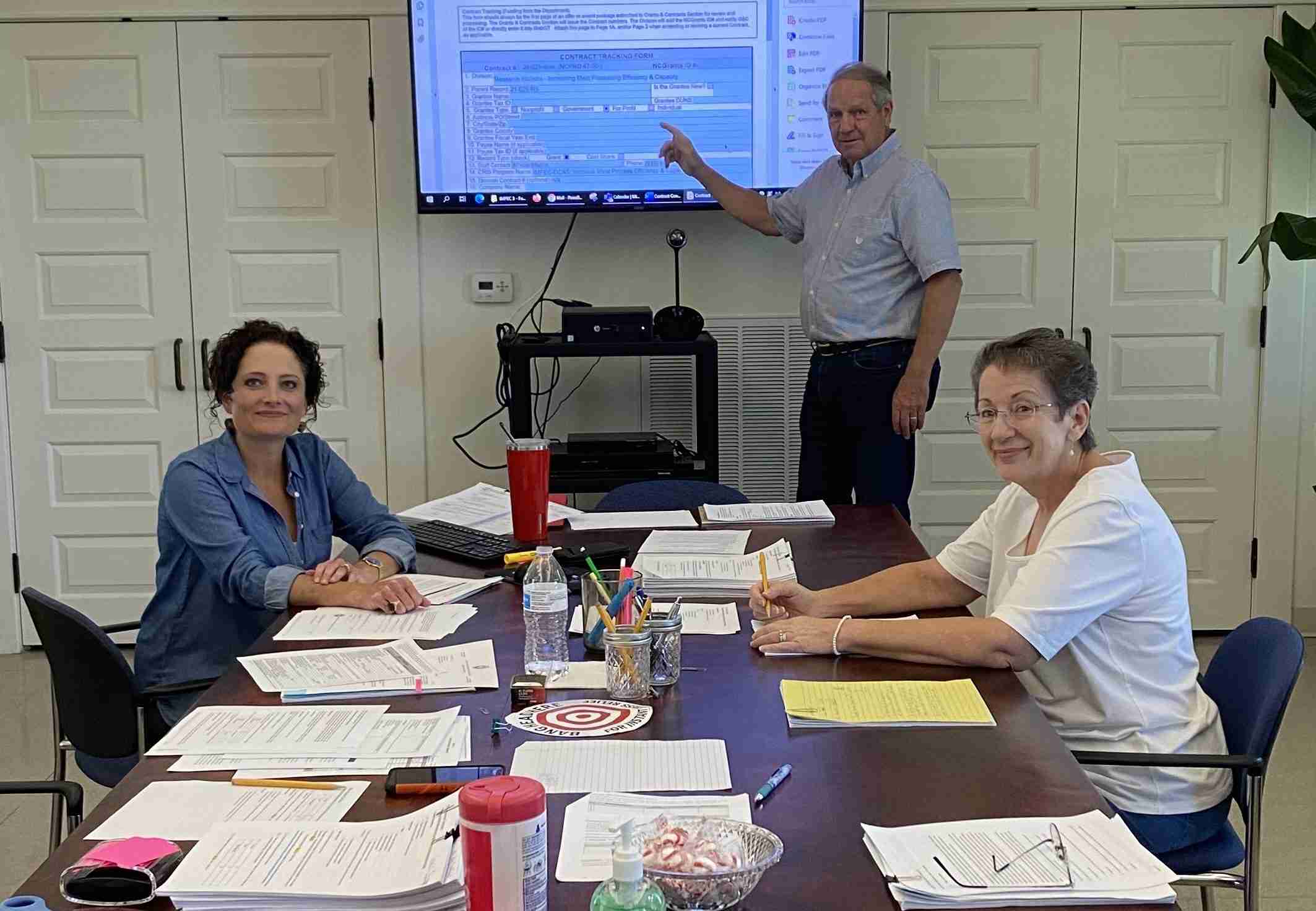 Agriculture Commissioner Steve Troxler recently recognized a team of employees that has had a huge impact on the state by helping to fix a food supply chokepoint. It’s a problem that became more obvious in the beginning of the COVID-19 pandemic – the state’s meat processors couldn’t keep up with demand. When the pandemic disrupted national food distribution, many North Carolinian meat and seafood raisers or producers and their customers turned to smaller locally owned and operated meat and seafood processing facilities. However, many of those businesses couldn’t accommodate the surge in demand for the meat and seafood to be processed. Waitlists and order backlogs quickly grew to be a year long.

That prompted the North Carolina Department of Agriculture and Consumer Services to create the “Increasing Meat Production, Efficiency and Capacity” (IMPEC) grant program. It’s stated goal has been to support North Carolina’s animal agriculture industry “by increasing efficiency and capacity of local small-scale meat processing facilities that will benefit the livestock producers, processors and consumers to ensure an uninterrupted supply of wholesome North Carolina meat products.”

Commissioner Troxler recognized them with the Accomplishment in Team Excellence Award.

“Everyone who was involved in the team continued to have another job in the department,” Hampton said. “That’s what makes us unique is that we kept our other jobs and just came together to make this happen. Lots of divisions have had other people come together to help with this too.”

Because no one was hired specifically to manage the grant program, the millions of dollars in federal money sent to NCDA&CS wasn’t used for salaries or administrative costs, but instead all the federal dollars went directly to help meat and seafood processors. Hampton may have been a slight exception as he came out of retirement from NCDA&CS to help spearhead the IMPEC team. However, he’s also been filling another role as the interim superintendent at the Central Crops Research Station in Clayton.

With approval from the N.C. General Assembly, the initial federal award from the CARES Act was $10 million, and a second funding award brought the total amount to $20.25 million.

The IMPEC team quickly worked together to setup the grant application and award process and then helped processors all along the way. Within the first three months, the team contacted companies, personally visited contacts, received applications, verified paperwork and awarded funding.

Many of the independent facilities that qualified for help have had outdated technology from 40 to 50 years ago. While the facilities were safe and clean, they technology and smaller spaces limited the ability to process more meat and seafood more quickly. The facilities also didn’t have the financial resources to upgrade to modern and expanded spaces. They didn’t get a full-on handout though. Each applicant that received assistance also had to pay up to one-third of its project’s cost.

“Yes, we did give out a lot of money, but the processors had to put their money into it too. That made the processors want to put money into something that was beneficial because they had skin in the game,” Hampton said.

While the IMPEC team worked with each facility, the NCDA&CS staff didn’t make decisions for the facilities. Hampton said each processor determined what its own limiting factors were, and they researched solutions. IMPEC grants then helped finance those solutions. No two projects were alike. So the IMPEC team couldn’t just use a template or a one-size-fits-all solution. The team had to work with each facility in a way that was customized to each facility’s needs. It was a labor-intensive process, but Hampton believes it’s paid off.

“One year ago when I talked to farmers, they couldn’t get a date to harvest a steer for one year. Today I think we’ve made just about half the improvements that are to be made with the money to be spent, and people can now get a steer processed in about 30 day now,” Hampton said. “My estimate is that it’s resulting in a third to a 40 percent increase in processing across the state. That is significant. I think that’ll make a difference for decades.”

The fact that the team was working during the pandemic shouldn’t be overlooked either. Workflows had to be adjusted because the team members were often working separate from each other. Hampton said there were lots of virtual meetings online and even meetings with the local business managers in parking lots to maintain distance. The pandemic also contributed to delays in construction and other areas as backlogs and staffing affected other industries needed for the facility improvements. Those delays have extended the team’s work. A third round of funding is expected to be approved, which will extend the team’s work even more.

“Thanks to this team, 57 companies have received help from the IMPEC program. Each grant was tailored specifically to the individual company’s needs, so we’re maximizing every dollar we award,” Troxler said during the online award ceremony. “Of course, the companies aren’t the only ones benefitting from the IMPEC program, though. Our state’s consumers, restaurants and schools are a lot less likely to see disruptions in the food supply too, thanks to this team’s work.

Let’s not forget our producers, the farmers, who also benefit by being able to get their product out to consumers efficiently. That’s why I like to call the IMPEC program a win, win, win for our state. It is a success because of the commitment of this team.”

For Hampton, the team’s work is just a reflection of the department overall. He said many more people throughout the department have helped get the team what is needed all along the way.

“I’m proud to be a part of this department. The fact that we were recognized just shows that we’re all a team. Every time we needed something, someone in the department stepped up to help. We’re just an example of the team the entire department has,” Hampton said. “No one ever said that’s not my job. People just pitched in and got it done.”