Two volunteers make headway at Headwaters, cleaning up trash and inspiring others to do the same 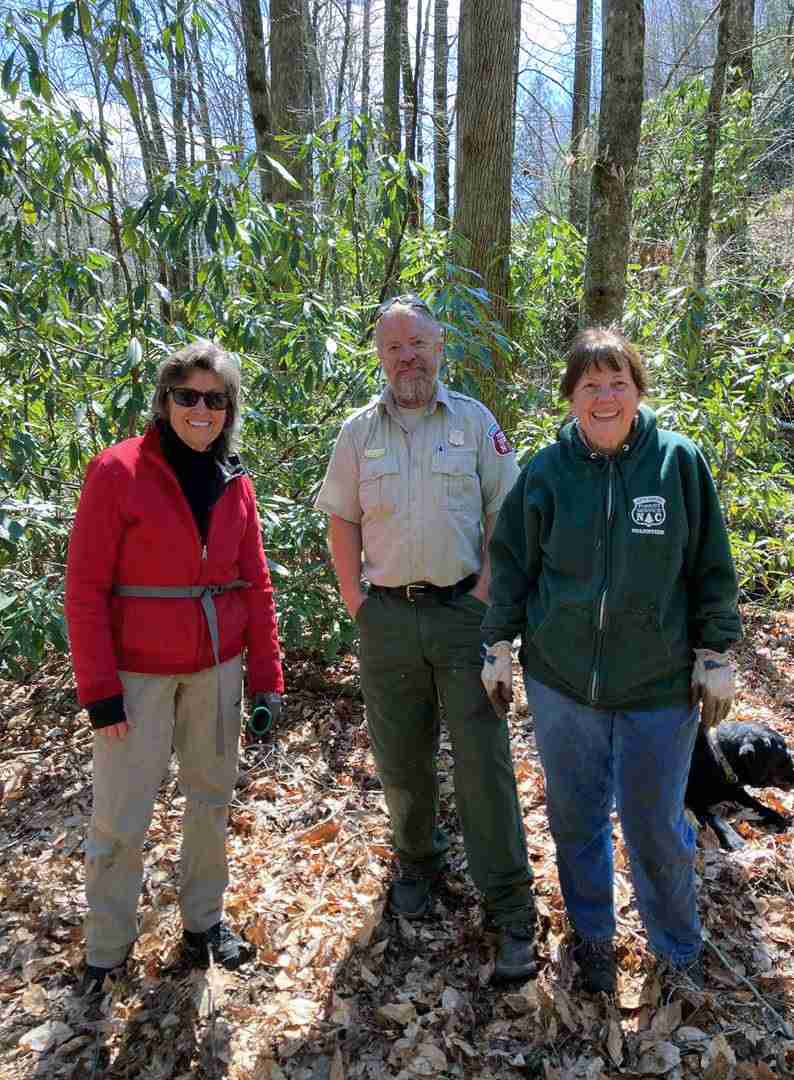 Earth Day is a time for each of us to reflect on how our lives impact the planet, our environment. We can think about and commit to new clean and green practices that reduce our carbon footprints, one step at a time – and then, how that might improve our environment, the planet we have not inherited but have instead borrowed from our children.

With roughly 7.9 billion people on this planet waking each day to carry on along our various paths – eating, working, playing, living, repeating – taking in what we need to put out what we need, all the while leaving behind waste, sometimes in the right places and other times in the wrong places. At what cost to an environment we have only borrowed? From that tiny piece of plastic wrapper that gets sucked out the car window to a bag of garbage dumped along the roadside, from old car batteries and tires left in the woods to household appliances dumped in a creek bottom just off the dirt path, our garbage finds its way into our forests, rivers and streams. It pollutes our air, soil and water, harming this borrowed environment, sensitive ecological communities, wildlife and people. What comes next?

As easily as garbage becomes litter, commitment becomes action and action becomes solutions. If what is put down is picked up and disposed of properly, restoration can begin. Thanks to Carol Vickery and Paula Swartz, restorative headway is being made at Headwaters State Forest.

Located about 10 miles south of Brevard in southern Transylvania County, Headwaters State Forest is a uniquely special forest wonderland combining natural resource conservation with dispersed recreational adventure. Primitive, wild, a working forest. And, as its namesake implies, Headwaters State Forest encompasses the headwaters of the East Fork of the French Broad River, with 20 waterfalls,more than 50 miles of high-quality trout streams, and rare Appalachian mountain bogs, solidifying its importance to provide clean drinking water for local communities. Just as critical headwaters flow through the forest, garbage will too if we let it. Carol and Paula won’t.

“Carol and Paula, two local ladies who love Headwaters State Forest as much as I do, showed up on my radar several years ago,” said Michael Cheek, assistant regional forester and supervisor at Headwaters State Forest. “In fact, I came upon them in the forest back then, long before they were supposed to be in there.” Michael goes on to describe the conversation that started it all. “This past autumn, Carol contacted me with some questions about the Blue Wall map developed by Pisgah Map Company. During our conversation, she asked if she could clean up some of the trash in the forest, garbage that had been left by the previous owner and tenants of the property.” Following that conversation, Michael met Carol and Paula at Headwaters State Forest and simply told the pair to “go for it.” So, they did, trekking through undeveloped and remote wildland with few developed trails and mainly informal paths and roadbeds. After 26 trips to the landfill, a loaded dumpster, two large trailer loads, 37 tires, 3 car batteries, and more than 130 bags of garbage, Headwaters is cleaner and greener, and each of us will live better because of it.

According to Michael, “The area had served as a dumping ground for years. A lot of trash had been thrown over the embankments of the roadways.” What’s the driver — boredom, craziness, amazing? Michael adds, “I’ll go with amazing.”

Carol and Paula were catalysts, sparking a cleanup revolution for Headwaters State Forest. The pair garnered support from fellow locals including Marsha Devane, Bobby Reese, Dwayne “Smitty” Smith with Transylvania County Solid Waste, and Charlie’s Tire in Brevard. Thanks to the kindness and commitment of these local folks, Headwaters approaches this Earth Day with a proverbial cleaner slate.

We each have a part to play in protecting and preserving our forestland, our natural resources, our Earth. Practicing Leave No Trace principles is a simple yet profound place to start. We can pack out what we pack in, essentially picking up what we put down and disposing of it properly, leaving the environment, the goodness intact so we all may benefit and enjoy into the future, paying forward with what we have merely borrowed from our children. Still, we’ll always need the Carol’s and Paula’s of the world, picking up what others leave behind and inspiring others to do the same … Earth Day, tomorrow and the next day. This Earth Day, April 22, make the time and commitment to be like Carol and Paula. Find a volunteer group near you and pick up what others leave behind. If you can’t find a group, be a catalyst. Start one.

To learn more about Headwaters or other North Carolina state forests and how they are managed as working forests by the N.C. Forest Service, visit www.ncforestservice.gov.