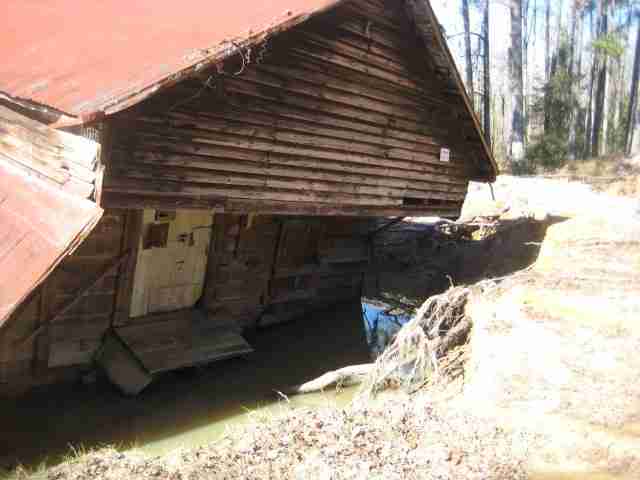 Throughout North Carolina, there are dozens and dozens of disaster recovery projects still in the works in the aftermath of Hurricane Florence in 2018. Many of those are projects that have been made possible with support from the Soil and Water Conservation Division in NCDA&CS. The division has helped fund many projects aimed at stabilizing land after serious erosion. Other projects have been for stream debris removal (such as the previously covered debris removal along the Coharie River).

The projects have cut down on soil and debris washing into waterways, and some have kept land from crumbling away even further than they did during Florence. That’s protected roads and both residential and commercial properties that were in danger of falling into eroded areas. Some projects have also had the benefit of reducing flooding.

The projects are Emergency Watershed Protection (EWP) projects administered through the Natural Resources Conservation Service (NRCS), an agency of the U.S. Department of Agriculture. As previously mentioned in an article about the Whittaker Pointe Shoreline Restoration Project in Oriental, NRCS pays up to 75 percent of each project’s construction costs. The remaining 25 percent must come from local sources such as a county, city, tribe, soil and water district, etc. – usually called the local sponsor. Many local sponsors didn’t have the money to make many of the projects happen. However, the N.C. Department of Agriculture stepped in to fund the match of 25 percent or more.

In all, NRCS approved 53 EWP projects in North Carolina following Hurricane Florence and Hurricane Michael, which affected western North Carolina the month after Florence. NCDA&CS is contributing to 50 of them. Projects in Scotland and Craven Counties are just some of the projects recently completed or currently in progress.

Scotland County
Amy Miller, the director of the Scotland County Soil and Water Conservation District said her office was able to do 14 EWP projects after Hurricane Florence. Many of them have just recently wrapped up, and she’s been finalizing paperwork.

One major project involved Johns Mills Pond, which suffered major erosion on a family’s property. An old mill house was falling, and soil and debris was washing into the pond because the dam had broken, Miller said. The area was also a threat to the nearby U.S. Hwy. 501. The EWP project stabilized the banks to prevent further erosion into the pond. Grass, other vegetation and large rocks were added to a berm.

While the local soil and water conservation district had some money to put toward EWP projects, the pond site was an example of one that probably wouldn’t have been done if NCDA&CS hadn’t funded the 25 percent match. The pond site alone cost about $69,000, and with several other projects needed, the district couldn’t pay the match amount. Neither could the property owners.

Most of the other projects in Scotland County have involved removing storm debris from drainage ditches.

“It’s been great. We’ve been able to help a lot of people,” Miller said. “It’s helped a lot of landowners get storm debris out of the ditches – getting them better prepared for the next flooding disaster that comes along.”

Craven County
The Craven County Soil and Water Conservation District has been working on 42 EWP project sites, totaling nearly $4 million in work. (As with many EWP projects, a single project can include many different property sites.) Many of them involved residential lots along the Neuse River that experienced major erosion from Hurricane Florence. Homes were left dangerously close to cliffs when large parts of their back yards eroded into the river.

Patrick Baker, natural resources conservationist for the district, explained that the projects are strictly stabilization efforts to prevent further erosion that would endanger homes or other structures. The projects do not restore the land back to the way it was before the Hurricane Florence erosion. Instead, they add just enough soil, plantings and rocks to secure the area.

“At least 50 percent of the property owners I’ve worked with have said whenever we finish with the stabilization, they may have another contractor come in to do more work to make a gentler slope and give them more yard space or to do further improvements to prevent further erosion,” explained Wayne Floyd with Recovery Management Associates.

Floyd and his company have been consultants, contract administrators and program managers for many of the EWP projects in Craven County. At one site where erosion had washed away the soil under part of a two-car garage, he mentioned the importance of the projects.

“This provides so much needed relief for this property owner,” Floyd said. “They’ve been sweating it out for the last two hurricane seasons in fear of another big erosion event.”

As with the pond site in Scotland County and many other sites across the state, Baker mentioned that many property owners wouldn’t have the money to fix the erosion. Even if they could do the preliminary stabilization work, they wouldn’t be able to do the additional work Floyd mentioned to restore their property to what it was.

Likewise, he said the Craven County Soil and Water Conservation District wouldn’t have had the money to fix so many sites. So the disaster recovery funds that came through NCDA&CS and the Soil and Water Division were crucial to helping property owners keep their land intact.

“If the state division hadn’t stepped in to provide the money to the county, these projects likely would not have been completed,” Baker said.

The NCDA&CS push for funding*
To get the money needed for the local matches, Agriculture Commissioner Steve Troxler, the director of the Soil and Water Conservation Division Vernon Cox and other division leaders requested money from the N.C. General Assembly after Hurricanes Florence and Michael. State lawmakers included the funding as part of the state’s disaster response effort, showing they supported NCDA&CS and trusted the department to get the work done.

David Williams, the assistant director of the Soil and Water Conservation Division, estimates about two-thirds of the EWP projects in the state wouldn’t be possible without the matching funds from the state. That is where the division will continue to play a vital role in helping communities complete projects they need.

“The N.C. Department of Agriculture contribution really helps out the sponsors. I’m not sure a lot of these projects would have advanced if the sponsor had had to come up with the money for the cost share,” said Jim Kjelgaard, EWP state program manager and state conservation engineer for NRCS.

After Hurricane Irene in 2011, only one EWP project site was approved in North Carolina, Williams said. That’s when leaders in the division and the N.C. Department of Agriculture began working to get more assistance from the federal program. The effort paid off after Hurricanes Florence and Michael when the General Assembly made funds available and NRCS leaders responded by allowing more projects to qualify for EWP funds.

With that support, Cox, Williams and others from the department began sharing the information with local communities. As word spread, more and more communities applied for EWP assistance in hopes that the program would be more available than it had been in previous years.

“We were telling local leaders we’re going to make it work after Florence,” Williams said. “I’m glad we’ve been able to make EWP work to meet many of the restoration needs of North Carolina following Florence.”