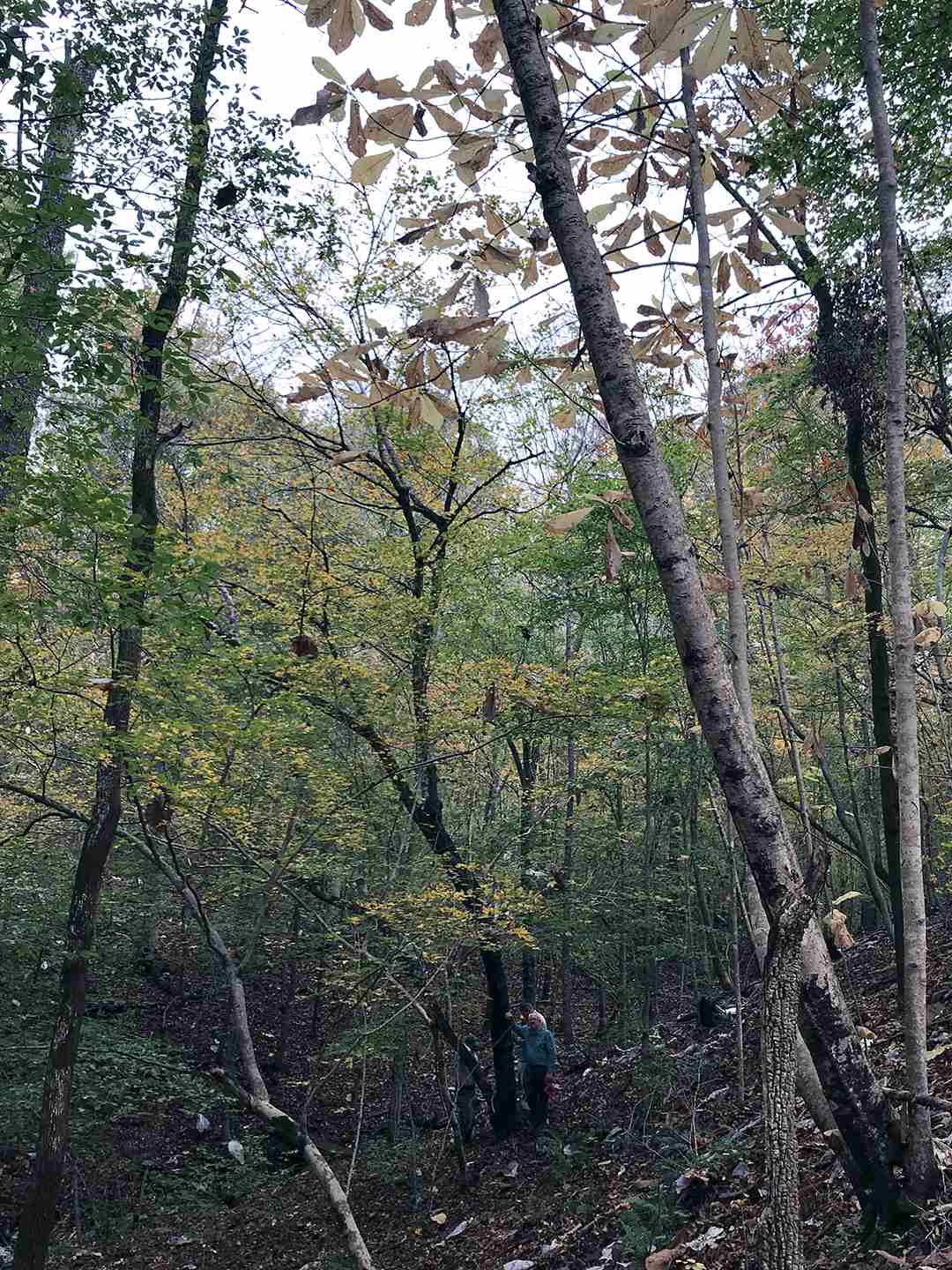 American Forests’ National Register of Champion Trees began as a national competition with one goal in mind; to discover and preserve the largest living specimens of American tree species. This goal stemmed from a desire to protect and preserve these trees for future generations. The National Register of Champion Trees recognizes more than 600 trees as the biggest of American tree species that range from giant sequoia (Sequoiadendron giganteum) to jumping cholla (Cylindropuntia fulgida).

Dr. Robert K. Peet, a research professor in the biology department at UNC-Chapel Hill, nominated a Gaston County chalk maple for the National Register in October 2018. In October 2019, NCFS Urban Forestry Specialist Jennifer Rall headed out to the Redlair Plant Conservation Preserve. She was on a mission to verify measurements for the chalk maple that Dr. Peet had nominated. Jennifer was accompanied by Dr. Peet; NCFS staff Rick Gore, Matt Barker and Chase Payne; Lesley Starke with the NCDA&CS Plant Conservation Program; and, Haywood, Sabine and Katherine Rankin. While measuring the nominated tree, a noticeably larger chalk maple caught the eyes of the team. It was this chalk maple, the one located by happenstance that was measured and submitted for designation as a national champion tree.

The chalk maple is the only one of its species on the National Register. The champion chalk maple has a circumference of 37.5 inches, height of 65.08 feet, and an average crown spread of 41 feet, totaling 113 points. Typical mature height for this species is 20-30 feet, and typical mature crown width can range from 15-25 feet. Chalk maple is a small growing, understory tree, typically found in rocky woods, river bluffs and ravines throughout the Piedmont region of North Carolina. The Redlair Plant Conservation Preserve, home to the champion chalk maple, is a state-owned property. The preserve is owned and managed by the N.C. Department of Agriculture and Consumer Services’ Plant Conservation program. The program’s mission to conserve native plant species of North Carolina in their natural habitats now and for future generations directly aligns with why the National Register was started and continues. In 2013, the Plant Conservation Program acquired the Redlair Preserve, which lies within the Catawba River basin and adjacent to the South Fork of the Catawba River in the Spencer Mountain Conservation Area. Initially, this land was acquired to protect the largest known North Carolina population of the state-listed bigleaf magnolia (Magnolia macrophylla) as well as one of few natural habitat occurrences of the federally endangered Schweinitz’s sunflower (Helianthus schweinitzii). At roughly 730 acres, it is the size of the property, the excellent examples of typical Piedmont upland communities including several hardwood forest types, and the water quality contributions for the region that resulted in preservation of this site. The property was previously owned by the Rankin family and the Catawba Lands Conservancy. They began preservation efforts for the site and remain engaged and committed to the long-term conservation and management, in partnership with the N.C. Plant Conservation program, of this special place, which is now home to a state and national champion chalk maple.

Brett Dupree, a volunteer with Mecklenburg County Treasure Trees program, nominated a Union County willow oak for the National Register in January 2020. In February 2020, NCFS Union County Ranger Andy Cranfill verified measurements of the champion-to-be. The second time proved to be the charm for this champion oak. The tree was first nominated for the State Register in 2008.

The willow oak is the second largest willow oak of the four listed on the National Register. The champion willow oak has a circumference of 337 inches, height of 90 feet, and an average crown spread of 135 feet, totaling 461 points. Typical mature height for this species is 60-75 feet, and typical mature crown width can range from 40-50 feet. Willow oak is a moderately fast-growing species, typically found in the bottomland wet areas of floodplains yet is drought tolerant. It is widely planted in urban areas as a street tree. While distinguished from other oak species by its leaves, which are shaped like willow leaves, this tree is often incorrectly referred to as a pin oak (Quercus palustris).

For a look at the complete 2020 National Register or North Carolina’s national champion list, visit https://www.americanforests.org/get-involved/americas-biggest-trees/champion-trees-national-register/.

For more information about state champion trees, how to nominate and measure a potential champion and how to contact your local NCFS county ranger for assistance, visit https://www.ncforestservice.gov/Urban/nc_champion_big_trees_overview.htm.