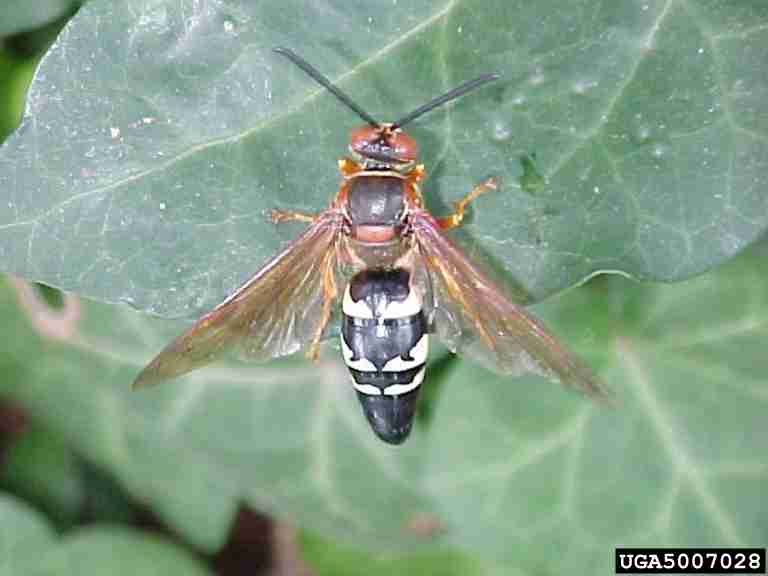 With the widespread news about discovery in Washington state of a few Asian giant hornets also notoriously dubbed “murder hornets,” it comes as no shock that many North Carolinians are wary of large wasps. However, if you see a cicada killer wasp, have no fear! Cicada killer wasps are not interested in harming you, so long as you are not a cicada – and they are considered beneficial.

Recently, many North Carolinians have confused cicada killer wasps with the infamous “murder hornets.” In fact, Dr. Matt Bertone, director of the Plant Disease and Insect Clinic at N.C. State University, estimates that out of about 250 insect identification requests, 16% are cicada killer wasps. However, it is important to note that Asian giant hornets have not been spotted in North Carolina.

Cicada killer wasps are solitary wasps that do not live in colonies and nest in light-textured, well-drained soils. These impressive wasps burrow tunnels that extend to a depth of six to 10 inches in areas with plenty of sunlight. U-shaped mounds surround nest entrances that are about one and a half inches in diameter. Females create three to four cells, which house growing larvae, at the end of each burrow. Remarkably, these wasps can detect and capture cicadas in flight. Female wasps capture cicadas and paralyze them with a sting. Then, the female wasps drag the paralyzed but live cicadas to their burrows where they stuff the prey into larval cells. Afterward, the female cicada killers lay eggs in the cells. Larvae hatch from the eggs before burrowing into the cicadas and eating them from the inside out. Immature cicada killer wasps overwinter in the tunnels before emerging as adults in July and dying by mid-September.

Cicada killer wasps are considered beneficial because they prey upon cicadas that can harm young trees. Cicadas saw into branches to lay their eggs, severing twigs and causing leaves to turn brown which is a condition called flagging. As a result, cicadas may be concerning to owners of nurseries and orchards because they can cause extensive flagging on young trees. One female cicada killer can gather 100 or more cicadas in her lifetime, benefiting trees.

Even though their large size can be intimidating, cicada killer wasps are not likely to sting you. Unlike social bees and wasps, cicada killers will not guard their nests, so the female wasps rarely sting unless they are mishandled. While males can display aggressive behavior, such as “dive bombing,” they are incapable of stinging and are therefore harmless. Like any insect species, only female cicada killers can sting using a modified egg-laying organ called an ovipositor. So, unless you are an enticing cicada, you have no reason to fear cicada killer wasps!

The Asian giant hornet is the world’s largest hornet, measuring up to 2 inches in length. Defining characteristics are a bright orange or yellow color, notched eyes, a dark brown thorax (where the legs and wings are connected), and brown and orange stripes over the abdomen.