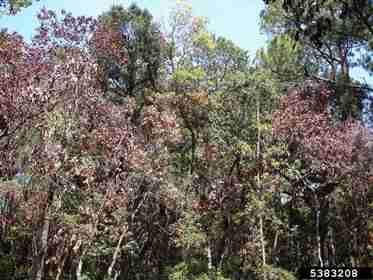 Since 2002, nearly all redbay trees have been disappearing in areas south of North Carolina. First detected in Georgia, the nonnative redbay ambrosia beetle, Xyleborus glabratus, carried these redbay trees to their dooms by introducing a deadly fungus. While the redbay ambrosia beetle is only about 1/16 inch long, it packs quite a punch against trees in the laurel family, including redbay and sassafras. However, it couldn’t complete its attack without its accomplice: the laurel wilt fungus, Raffaelea lauricola.

Laurel wilt is very aggressive and spreads quickly. The fungus causes the trees it infects to wilt and die within a few weeks or months. Further, just one female redbay ambrosia beetle can cause tree death and create an entirely new population! The female flies to a host tree, where it reproduces and starts a new population without even mating. The offspring leave to attack new trees. While these beetles spread naturally through flight, they are also spread through infested wood, which is why it is important to avoid the movement of firewood and other wood products.

Laurel wilt has caused a significant reduction in redbay. In fact, it often kills more than 90% of redbay trees that are over 1 inch in diameter. Redbay is important because it provides food and shelter to many animals like turkeys, bears, deer and songbirds. Two species of swallowtail butterfly rely almost completely on redbay and spicebush. Signs and symptoms of the beetle and the disease it carries include dead, reddish or purplish brown leaves that persist on the tree for up to a year, dark staining below the bark of infected trees, tiny beetle exit holes in the bark , and small “toothpicks” or tubes of sawdust and beetle excrement extending from some of these holes.

Since it is so important to monitor the spread of laurel wilt, the N.C. Forest Service has been collaborating with Bud Mayfield at the USDA Forest Service Southern Research Station on a project to map the spread and impact of laurel wilt in sassafras. In the past, laurel wilt has only existed on the Gulf-Atlantic Coastal Plain, but it is now spreading to nearby Piedmont and Mountain regions (where redbay is not present) using sassafras. Laurel wilt is more difficult to detect in sassafras because these tree sheds it leaves shortly after they die. The goal of the USDA Forest Service’s project, which began in 2018, is to detect laurel wilt early at sites that are near “risk-of-entry” points for redbay ambrosia beetle. These “risk-of-entry” areas include existing infestations and campgrounds where firewood is likely to be transported. Ultimately, the project will not only detect and monitor the spread of laurel wilt but also provide locations of potentially disease-resistant sassafras to researchers.

Hopefully, research projects like this one will allow us to limit the spread of laurel wilt. There is no consistent way to treat laurel wilt because insecticides are ineffective, and fungicides are costly and must be reapplied annually. We must monitor the pest and try to limit its spread by educating others on the dangers of moving firewood and other wood material. It is important to keep infected trees where they are. Even moving dead material to a landfill can spread laurel wilt! Dead trees should be cut and left on site or burned following all state and local regulations. if you think your trees have been infected with  laurel wilt, contact your county forest ranger for assistance.