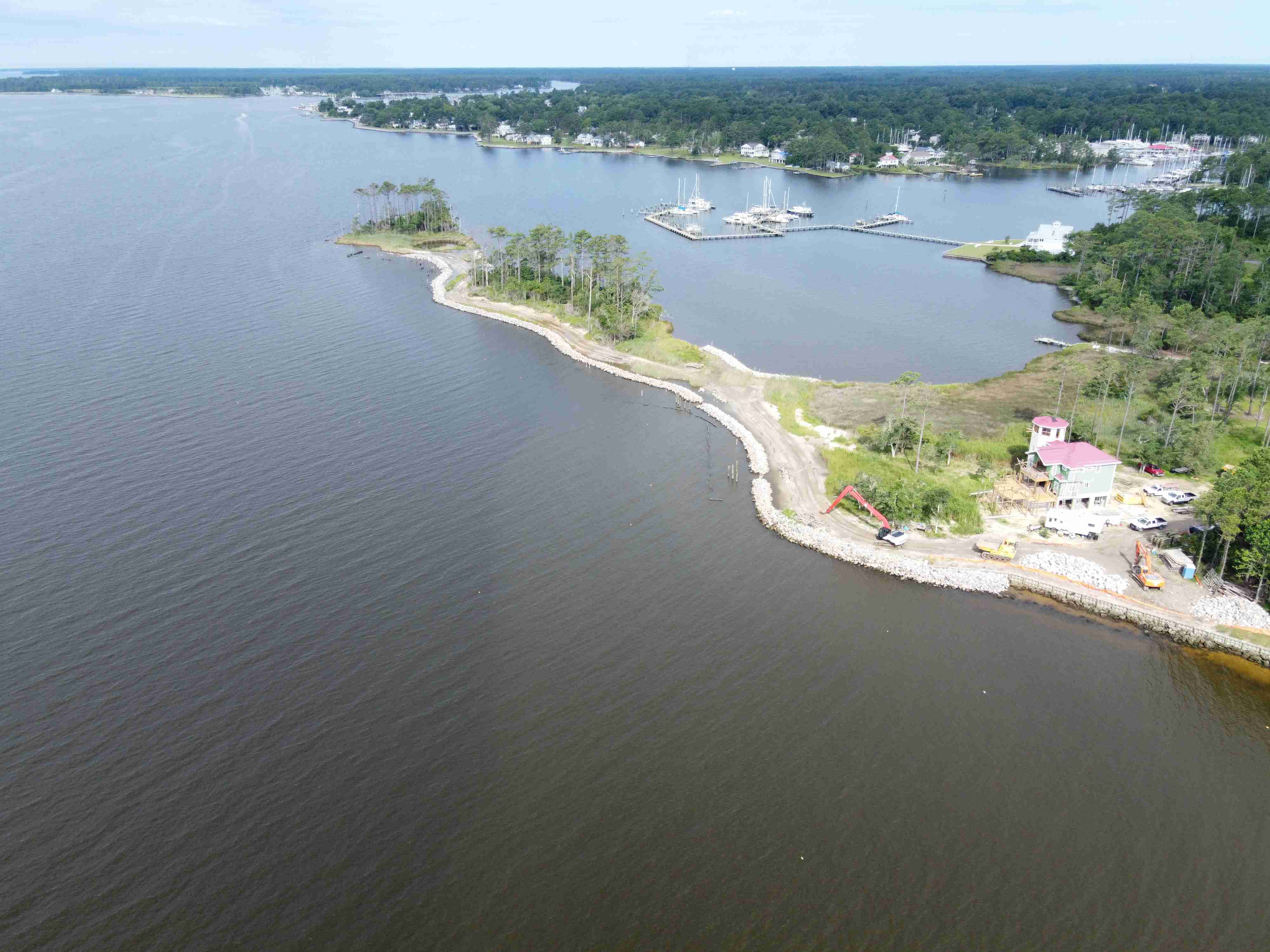 Funding from the North Carolina Department of Agriculture and Consumer Services is helping protect about $12.7 million of property and business in one eastern North Carolina town. That estimate comes from the town of Oriental in Pamlico County.

The project is called the Whittaker Pointe Shoreline Restoration Project, and the Department’s portion of funding was coordinated through the Soil and Water Conservation Division. It’s one of the first Hurricane Florence relief projects in the state to benefit from a funding partnership with the Natural Resources Conservation Service (NRCS), an agency of the U.S. Department of Agriculture.

Specifically, a significant portion of the funding is coming from an NRCS program called Emergency Watershed Protection (EWP). EWP federal dollars pay for up to 75 percent of a project’s construction costs, but the remaining amount must come from other sources such as the local community (county, city, tribe, etc.) – usually called the local sponsor. For the project in Oriental, and many others across the state, the N.C. Department of Agriculture stepped in to fund that 25 or more percent match.

To make it possible to match the EWP-funded projects in the state, Agriculture Commissioner Steve Troxler, the director of the Soil and Water Conservation Division Vernon Cox and other division leaders pushed for money from the N.C. General Assembly. State lawmakers showed faith and support in the department to get the work done and included the funding as part of the state’s Hurricane Florence disaster response effort.

“The EWP [and state match] money coming through was a godsend. It’s enabled us to do everything we hoped for,” Oriental Town Manager Diane Miller said. “The EWP project allows us to get all of the things we never expected [without need for a second phase], and make it an enduring, complete project that only has to be done once and not go back and do it again.”

The total estimate for the project in Oriental stands at a little more than $2 million. Whittaker Pointe on Oriental’s eastern side is a natural peninsula that protects the shoreline behind it from water and wind erosion. It’s especially critical during storm events . However, that protection has dwindled over the years. After Hurricane Matthew and Hurricane Florence, the land mass had eroded from about 18 acres down to six acres. As a result, the town counted 288 residential and business properties that were left vulnerable, including five marinas and two boatyards.

They all play a vital role in supporting the town through tax values and tourism income. The marinas, boatyards and associated businesses are a huge contributor to the local economy. So Miller and her team worked on a restoration plan to rebuild the peninsula and dredge Whittaker Creek to be sure boats could continue to dock in Oriental.

The Golden Leaf Foundation was an early funding partner. Evaluation and planning efforts showed the project would need about twice as much rock as originally planned, and the shoreline restoration needed some natural elements, such as wetlands restoration, to be sure it could solidly stand the test of time.

“I had a lot of people looking for additional funding in a lot of different places,” Miller said.

That’s where the EWP funding came into play. Miller found out the project could be completed with help from NRCS and EWP.

“There are communities large and small across the U.S. that have used it. This EWP program is critical for cities, towns, counties to address their needs,” explained Stuart Lee, the state public affairs and outreach officer for NRCS in North Carolina. “It’s a program that is crucial. We get called on all the time. Money comes from Congress for EWP, then to NRCS and is filtered down to our state partners to get the projects on the ground.”

Jim Kjelgaard helped handle the funding structure for Miller. As EWP state program manager and state conservation engineer for NRCS, he often plays a role in organizing NRCS involvement in local projects and moving them along from planning to completion.

“Oriental was unique in that they’d done a lot of the planning, but EWP and the Department of Agriculture was able to step in and provide the funding,” Kjelgaard said.

The project is about 60 percent complete as of mid-July. It calls for huge granite rocks to be placed out into the water about 25 feet from the existing land. Dirt will fill in the space between the existing shore and the line of rocks. Some of the dirt is coming from the dredging of Whittaker Creek. That infilling will expand the land mass where it has eroded away. Oyster beds are being built on the back side of the peninsula, and there is wetland and upland restoration in various areas of the peninsula. Those restorations involve expertly planned plantings of natural vegetation – plants that had been there in the past but have been washed away. Restoring habitat increases the fortification, Kjelgaard said.

Miller believes that her success in planning and funding this shoreline restoration project means it could be a blueprint for many other projects in the future.

There are currently about 38 local sponsors with more than 100 EWP projects in the works in North Carolina. Many of those projects are much smaller than the Oriental project, but they’re still incredibly important for local communities. However, Kjelgaard and leaders in the Department’s Soil and Water Conservation division said many local communities can’t afford to pay for the 25 percent or more match that’s required of them. David Williams, the assistant director of the Soil and Water Conservation Division, estimates about two-thirds of the EWP projects in the state wouldn’t be possible without the matching funds from the state. That is where the division will continue to play a vital role in helping communities complete projects they need.

“The N.C. Department of Agriculture contribution really helps out the sponsors. I’m not sure a lot of these projects would have advanced if the sponsor had had to come up with the money for the cost share,” Kjelgaard said.

After Hurricane Irene in 2011, only one EWP project site was approved in North Carolina, Williams said. That’s when leaders in the division and the N.C. Department of Agriculture began working to get more assistance from the federal program. The effort came paid off after Hurricane Florence when the General Assembly made funds available and NRCS leaders responded by allowing more projects to qualify for EWP funds.

With that support, Cox and Williams and others from the department began sharing the information with local communities. As word spread, more and more communities applied for EWP assistance in hopes that the program would be more available than it had been in previous years.

“We were telling local leaders we’re going to make it work after Florence,” Williams said. “I’m glad we’ve been able to make EWP work to meet many of the restoration needs of North Carolina following Florence.”