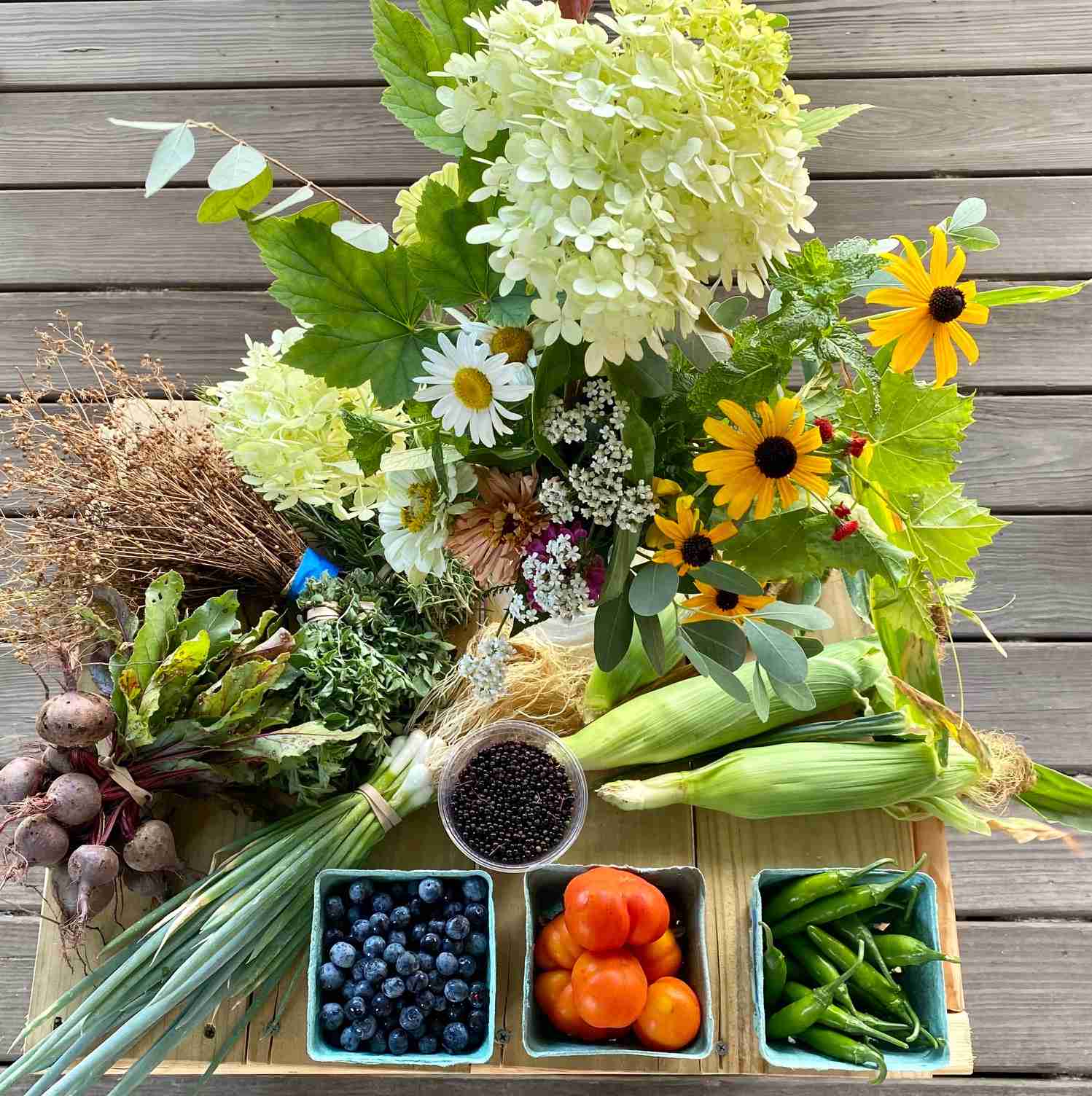 “Dig where you live.” That’s the slogan for the Raleigh City Farm. While it’s certainly catchy – as any good slogan should be – there’s more to it than a phrase with a ring to it. It reflects what urban farms such as Raleigh City Farm aim to do – bring agriculture closer to city dwellers.

The idea for the farm began back in 2009 when some friends began looking around Raleigh for a place to start an urban farm.
The owner of a one-acre plot of land at the corner of N. Blount Street and E. Franklin Street decided not to develop the site and instead handed it over to Raleigh City Farm. Raleigh City Farm officially incorporated as a nonprofit in 2011, and the first beds were built in 2012. (See the full origin story at RaleighCityFarm.org).

Although 2020 marks the ninth year of farming on the site, it’s the first year the organization has hosted its own weekly farm stand. That’s because the farm originally operated on a different model, and the new strategy means the food grown on the land is available directly to the public. The original mission “to transform forgotten urban spaces into productive farmland” has evolved over time to the current mission “to grow the next generation of farmers by connecting our community to sustainable agriculture.”

The farm is now six months into “a new season of stewardship,” described Executive Director Lisa Grele Barrie. After months of planning, “we pressed play on February 1,” she said.

Raleigh City Farm switched from a “farm partner” to a “farm manager” model and now operates with a sole farm manager. The farm hired Josh Sattin to farm and manage the land and operations, and despite COVID-19 constraints, he has already transformed the site using sustainable, regenerative no-till practices, with a small team of interns and volunteers. Grele Barrie is heavily involved as well, along with the board of directors, advisory council and volunteers who all play a part in keeping things growing.

The original farm partner model that was in place until this year meant the farm operated sort of like a business incubator – a farm incubator perhaps. Raleigh City Farm provided resources including money and volunteer labor to farmers – usually young, aspiring farmers hoping to learn how to make a business out of farming. With varying amounts of success, some farmers used the land for years, and some farmers came and went in shorter stints. The farm’s website has a section dedicated to some of the previous farmers.

“We knew we had to change. It was difficult for a farmer to earn a living on the site,” Grele Barrie said. “The model just wasn’t working. Trying to support farmers on the site was not sustainable, and that’s one of our core values.”

By no longer partnering with farmers, Raleigh City Farm has taken sole ownership of operations on the one-acre site, and it’s created a closer connection to the surrounding neighborhood and the people who live, work and play in the area. Anyone can come to the weekly farm stand that’s set up on Wednesdays. Previously, the farmers most often set up their farm businesses to sell their produce to local restaurants and to people who subscribed to receive produce on a regular basis (i.e., a community-supported-agriculture (CSA) model).

In addition to selling directly to the public, the farm can now decide how to share excess with non-profits. The farm shares with the pay-what-you-can restaurant A Place at the Table, the Inter-Faith Food Shuttle and the Plant a Row for the Hungry program run through Logan’s Garden Shop.

“We’re thrilled with the outcomes and the feedback from our community” Grele Barrie said. “We’re hitting our numbers targets, and accomplishing the three goals we set out to achieve – grow, share and
reward.”

Obviously, the growing part is growing produce on the site themselves. The sharing part is helping other local non-profits. The rewarding part involves the farm’s Cultivator Club donor program. Donors who give monthly can get something from the farm stand each week it’s in operation.

Grele Barrie said having a closer involvement in what’s produced on the farm has been especially rewarding. She said there’s a great sense of purpose in that.

“There’s nothing like seeing customers thrilled to purchase the food you’ve grown and then also sharing it with non-profits who are addressing food insecurity and access,” she explained. “All of the outcomes, from my perspective, are very meaningful and relevant to the times we’re living in.”

The work going on at Raleigh City Farm is a reminder that no matter where you are – even in the heart of a city – a connection to agriculture can truly be in your own back yard.

If you’d like to visit the weekly farm stand, it’s open each Wednesday from 4 to 7 p.m. There are also other events, including yoga and volunteering and social events – all with COVID-19 health and safety protocols in place. Find more information at raleighcityfarm.org.

Also, be on the lookout for the farm’s large annual fundraiser in October. This year’s re-envisioned Harvest Dinner at Home event will offer “specialty dinner packages” for take-home enjoyment. Chefs will prepare the meals, sourcing some of their ingredients from Raleigh City Farm and five Black farmers.