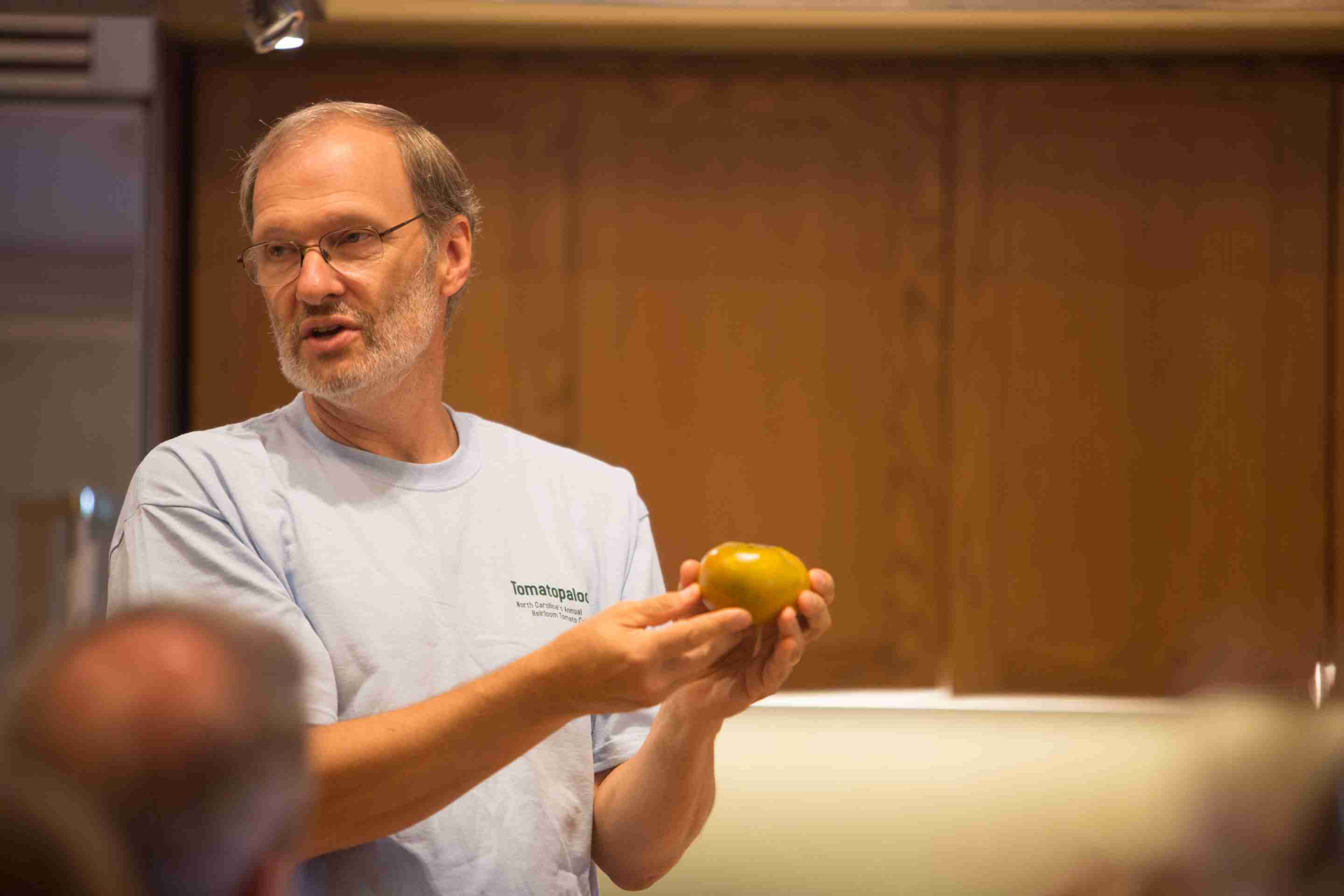 Many North Carolinians may know Craig LeHoullier simply as “the Tomato Man” or maybe “the North Carolina Tomato Man” if they’re being specific. …but he never even ate a tomato until he was a teenager. It’s an odd fact in a love affair that certainly didn’t begin with love at first sight.

That love affair has brought LeHoullier to what he describes as a sort of calling – a purpose in life, or at least a passion. He’s become known internationally for resurrecting thousands of varieties of heirloom tomato seeds and making them available for others to grow. Otherwise, many of those old tomato varieties may have been lost forever when no one decided to grow them anymore or pass down their seeds. He may be best known as the man who named the Cherokee Purple heirloom tomato and saved it from extinction.

Many people also may recognize LeHoullier from the many years he spent selling heirloom tomato seedlings at the State Farmers Market in Raleigh. He’s also become a sought-after speaker about gardening, and he’s written two books titled Epic Tomatoes and Growing Vegetables in Straw Bales (both from Storey Publishing). He has a website too where he shares the joys of his gardening passion.

“It’s just a wonderful opportunity to help people. I don’t take the responsibility lightly, and I’m in a great position to help people,” LeHoullier said. “I don’t tell people what to do, I show them what I do, and then they blend in my practices with theirs.”

A love rooted in gardening
His fame in the tomato world may seem a far cry from the kid who had never tried a tomato, but the truth is, a love of gardening was planted in him at an early age. It just took several years for that love to grow and eventually bloom. Some of LeHoullier’s earliest memories are of walking through his grandfather’s garden with him, and he has early memories of his father’s garden too.

“My grandfather and father cared enough about me to show me how to garden, so what I’m doing is just a way to pay it forward,” LeHoullier said.

He admits he assumed tomatoes must be “horrendous” until he eventually tried one from his grandfather’s garden. That taste of tomato was like water to a seed – a catalyst to help a love of gardening grow.

“My grandfather’s tomato kind of captivated my taste buds,” he said.

LeHoullier didn’t plant his own garden until years later though – shortly after he married his wife when he was earning his PhD in chemistry at Dartmouth College. That was 1981, and he didn’t start dabbling in heirloom tomatoes until 1986.

Some of the gardening magazines he read had seed shares and ads for seed saver exchanges. Their purpose was to allow people to share seeds they had from rare heirloom tomato varieties. He got a few heirloom tomatoes and was hooked.

Naming the Cherokee Purple
By 1990, he was gardening in Pennsylvania, prior to his move to Raleigh, working for Smith Kline Beecham (which later merged with another company to become Glaxo Smith Kline). He was still participating in the heirloom seed exchanges such as Seed Savers Exchange. He had even started a newsletter about tomato seeds. John Green in Sevierville, Tennessee, apparently caught wind of LeHoullier because he sent LeHoullier seeds from an unusual tomato variety without a name. Green had gotten the seeds from a friend whose family had acquired them from Cherokees in the area many decades earlier.

LeHoullier grew tomatoes from the seeds and saw for himself the unusual purple tone that Green said the tomatoes had. He tasted the great flavor too. He saved the seeds and named the tomato the Cherokee Purple. He then sent the seeds to his friend Jeff McCormack, owner of Southern Exposure Seed Exchange in Charlottesville, Va. Although he thought the tomato was ugly, it was delicious and unique. So McCormack offered the tomatoes as Cherokee Purple in his 1993 seed catalogue, making it available to the general public for the first time.

“In 1990, John Green and I were the only people who knew that tomato existed. How lucky would you have to be to know the right people to get it out there?” LeHoullier said, commenting on how fateful it was that Green sent the seeds to him.

Becoming a guardian of more heirlooms
Lots of similar stories have followed since then. One man sent LeHoullier seeds that his grandmother brought from Italy in 1917. LeHoullier grew more tomatoes from those seeds, saved the new seeds and shared them with the Victory Seeds catalogue to sell to the public. Now that man orders those tomato seeds, named Cancelmo Family Heirloom, each year and sends them to his extended family at Christmas. Those seeds provide the family members with a connection to their previous generations.

“I think it’s a great tribute to these people’s families that people can read the stories of these great varieties,” LeHoullier said.

Over the past 30 years, LeHoullier has received many, many more heirloom varieties seeds, and he feels like he’s become a guardian of those seeds. He turned the driveway of his house in Raleigh into his open-air nursery where he’s grown hundreds of tomato seedlings each year. For many years, he sold the seedlings at the State Farmers Market, and he gave away many of them also.

“We ended up making friends for life from our plant sales,” LeHoullier said. “We’d call them our annual tomato friends.”

While he’s sent seeds from each variety to Victory Seeds, he’s also kept seeds from every variety. He now has about 50,000 to 60,000 seed packets, vials or envelopes, plus every letter sent to him along with the seeds. When he and his wife moved to Hendersonville in January, they had about 25 boxes of tomato seeds.

Breeding new tomatoes
In addition to his work to preserve heirloom tomato varieties, LeHoullier has also been working since about 2005 to breed new tomato varieties. Most of the ones he’s worked on with an Australian friend, and their team of more than 700 amateur volunteers from across the world, are dwarf varieties aimed at being more manageable for people growing tomatoes in smaller spaces. He started releasing the new varieties around 2010, and currently 123 different varieties have resulted from the Dwarf Tomato Project. Victory Seed Company has committed to selling all the varieties from the project. He hopes the varieties he’s bred will be the heirlooms of tomorrow.

“Heirlooms never pretend to be the type of tomato that you can ship off to a market and sit there and be pretty and be good enough to eat a week from now. …What heirlooms give you is a tremendous variety of size, color, flavor, shape and nuances of flavor,” LeHoullier said. “Also, you can’t be a seed saver and share with hybrids.”

Ongoing work
While it may seem like blasphemy, his favorite tomato variety is actually a hybrid though. The Sun Gold tops his list of favorites.

“I’m not like many heirloom people who look down on hybrids. There’s a variety out there for everyone,” LeHoullier said.

Still, he loves working with heirlooms, and he loves sharing what he’s learned with others. He actually believes heirloom tomatoes chose him to help keep them remain relevant and available.

“I’m still doing it because going to look at the garden in the morning still gets me out of bed. There’s always something new to see and something new to share,” LeHoullier said. “It has all felt like a natural progression and felt like the right thing that I should be doing.”