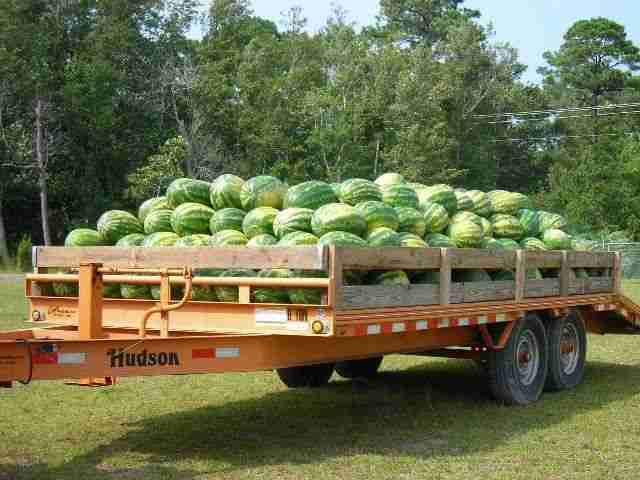 In the White Oak River basin of North Carolina the first of July ushers in the start of one of the sweetest parts of summer — watermelon season. The Bogue Sound Watermelon Growers Association consists of about 20 members and seven active growers. Growers are located in Jones, Craven, Onslow and Carteret counties.

Jasper Jones is a fourth generation farmer located in Stella. Along with his dad, Randy, Jones grows about 10 acres of watermelons. “We grew tobacco until 2004, the watermelons helped us find a crop that would help take the place of tobacco,” Jasper Jones said. In addition to watermelon, Jones grows corn and soybeans. “We are working on the fifth generation of growers,” he added. His daughter, Annabelle, is three.

Watermelons start from seed in the greenhouse in early March, the plants are then moved to the field around Easter. “We try to get some in the ground early and then some later, to help stretch the season,” Jones said. One acre can generally produce about 2,500 watermelons. Watermelon season typically runs from around the July 4th holiday through late August.

Jones offers this advice for picking the perfect watermelon. “You want to see the stripes kind of blend together and the melon should have a bumpy feel,” he said. “That is a sure sign that the melon is ripe. A lot of people don’t want a sun-burnt melon, but that is another sign a melon is ready. The older generation can tell by the sound a watermelon makes. It should be a deep thump or hollow sound. If it is more of a ping that melon is probably not ready.”

As for serving, Jones suggests cutting the melon up and putting it in the refrigerator and enjoy. “If we take the boat out on the sound we will bring along a couple of melons. You can drop them in the cool shallow water until you are ready to cut up and serve. It is a great way to enjoy watermelon when you are out on the water.”