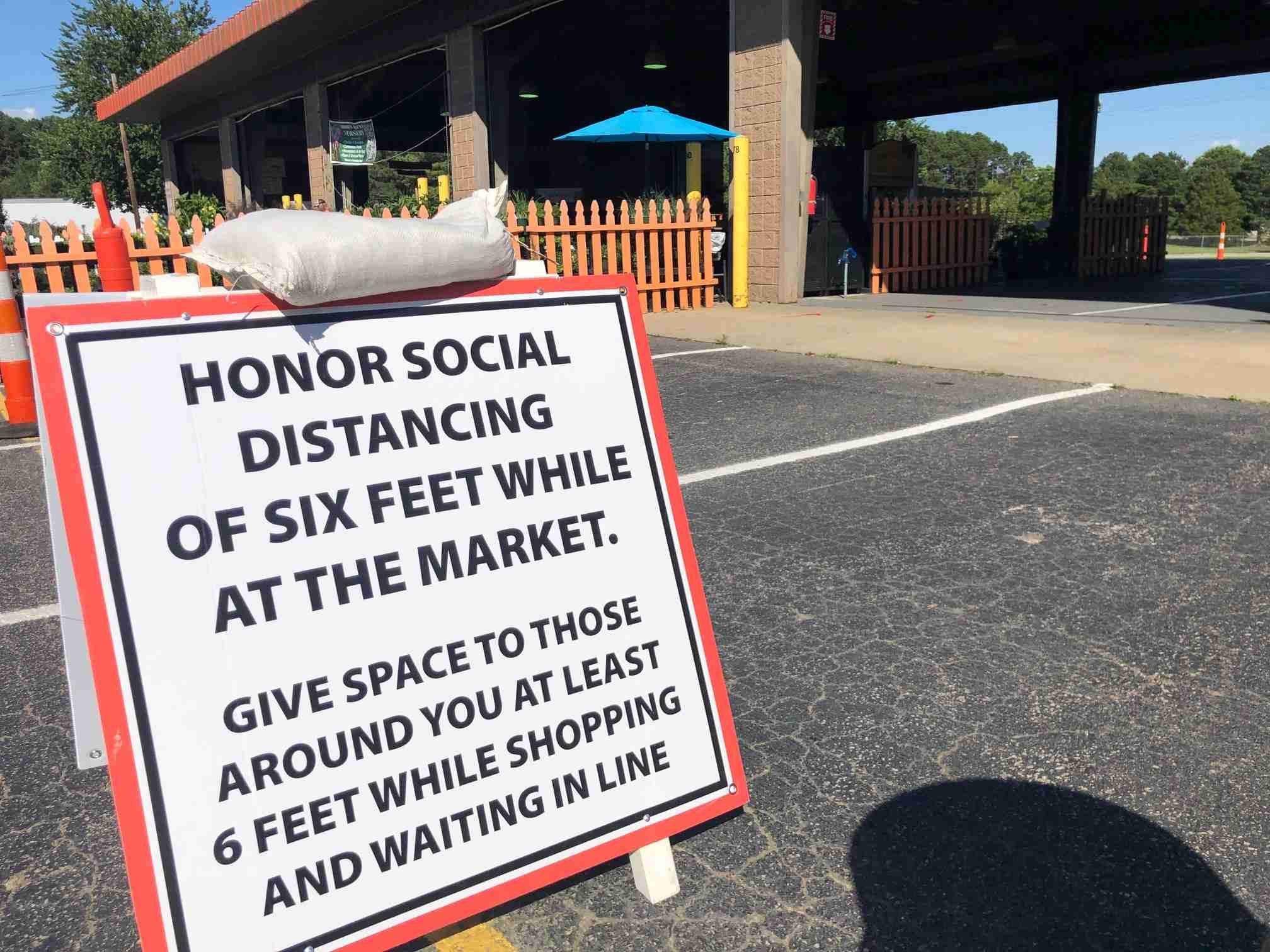 These days, the four NCDA&CS farmers markets are still operating with modifications due to the COVID-19 pandemic. It’s been three and a half months since the markets plunged into emergency response mode – having to make immediate adjustments for public safety while also staying open to provide a viable source of food for people. While that initial frenzy to make changes has subsided, the weeks that have followed have been full of additional adjustments, tough decisions and hard work in general. Extra work to stay open while keeping people safe continues.

“It’s a different way of thinking. Some people are frustrated and thinking it’ll be going back to the way it has been, but who knows,” said Doug Sutton, the manager of the Western North Carolina Farmers Market in Asheville. “We’re in a holding pattern waiting to see what happens.”

Because of their work in response to COVID-19, the farmers market management team members earned the NCDA&CS “Excellence in Team Accomplishment Award” recently. Commissioner Steve Troxler announced their award during a conference call on Monday. Precautions surrounding COVID-19 meant the recognition was done during the call instead of during an in-person meeting.

“They’ve been hard at it. Since March 10, it’s been the hardest three and a half months they’ve ever had,” commented Ron Moore, the Marketing Division’s assistant director of State Farmers Markets & Ag Centers. “It was no easy task, but they hitched their pants up so to speak, maybe had a little extra coffee, and made it happen.”

March 10 is the day Governor Roy Cooper declared a state of emergency and recommended social distancing and other measures related to mass gatherings. There were only seven confirmed cases of COVID-19 at the time. The wheels of change immediately began to turn for the state’s farmers markets. Social distancing was the new norm, and the market managers had to figure out how to make it happen.

Within a week, mass gatherings of more than 100 were banned in the state, in-person school was called off, and the governor ordered restaurants and bars closed to dine-in customers. Within another week, more close-contact businesses were ordered to close, and on March 27, the governor announced a “Stay at Home” order, effective March 30. It closed all non-essential businesses, cemented the six-feet social distancing and banned gatherings of more than ten people.

All the while, the state’s four farmers markets had been moving vendors and adding hand sanitizer and signage to help customers stay safe and remember the new protocols. The changes were happening as the markets were getting busier and anticipating the addition of new spring and summer vendors.

“It was very urgent,” explained Reed Stanboro, the assistant manager of the Charlotte regional market. “There was a big sense of urgency to keep everyone safe.”

In Raleigh, arrows guide customers to walk one-way through the vendors.

Explaining the specific spacing of vendors would take too long, and each market’s adjustments were a little different anyway. Just know the changes did not go over well with the vendors at first, but the market managers had to make it happen. It was the only way to keep the markets open for the public.

To say there was pushback is putting it lightly, but the managers explained the situation in a way that got the vendors to “buy in” to the need for adjustments. Unfortunately, the spacing also meant there was no longer room for some vendors. The markets prioritized maintaining spaces for farmers/vendors selling vegetables, fruits, meats and perhaps local honey.

For example, in Charlotte, crafters, bakers, prepared foods, concessions, nurseries and cut flower vendors were cut out. No vendors from out of state were allowed either.

“We just flat out ran out of room. We had to let 75 percent of our vendors know that there was no room at the market, and it was not an easy decision because that’s how people make their living,” said Amie Newsome, the manager of the Charlotte farmers market. “We had to make the decision based on safety though. It was a difficult time and continues to be.”

With ongoing shifting and the easing of some restrictions, more vendors have been allowed back at the markets. Sutton in Asheville said some vendors may not be in the same spot they have been traditionally, and they may not have as much selling space. It’s all part of the ongoing adjustments.

All of the market managers are quick to point out they had plenty of help to execute the COVID-19 response. None of the changes could have happened without the other staff members at the markets who helped move vendors, put up signs and hand sanitizer and whatever else was needed.

Many people from across NCDA&CS chipped in as well. They made phone calls, contributed to meetings and plans and updated the websites for the markets. They procured face masks, gloves and hand sanitizer – sometimes even giving the markets the supplies designated for their own divisions. Some divisions sent volunteers to help move vendors or do other hands-on work. The Forest Service Division even sent officers to help guide customers at busy times. As simple as it sounds, another good example is the major collaboration to quickly write, design, print and cut signs that were needed as soon as social distancing was ordered on March 10. That work was done in-house at the department.

“This has been a great example of the type of people and the teamwork we have in the Department of Agriculture,” Moore said. “As for the managers who implemented everything at the markets, I’m proud of them. They’ve earned this award, and they deserve this award.”