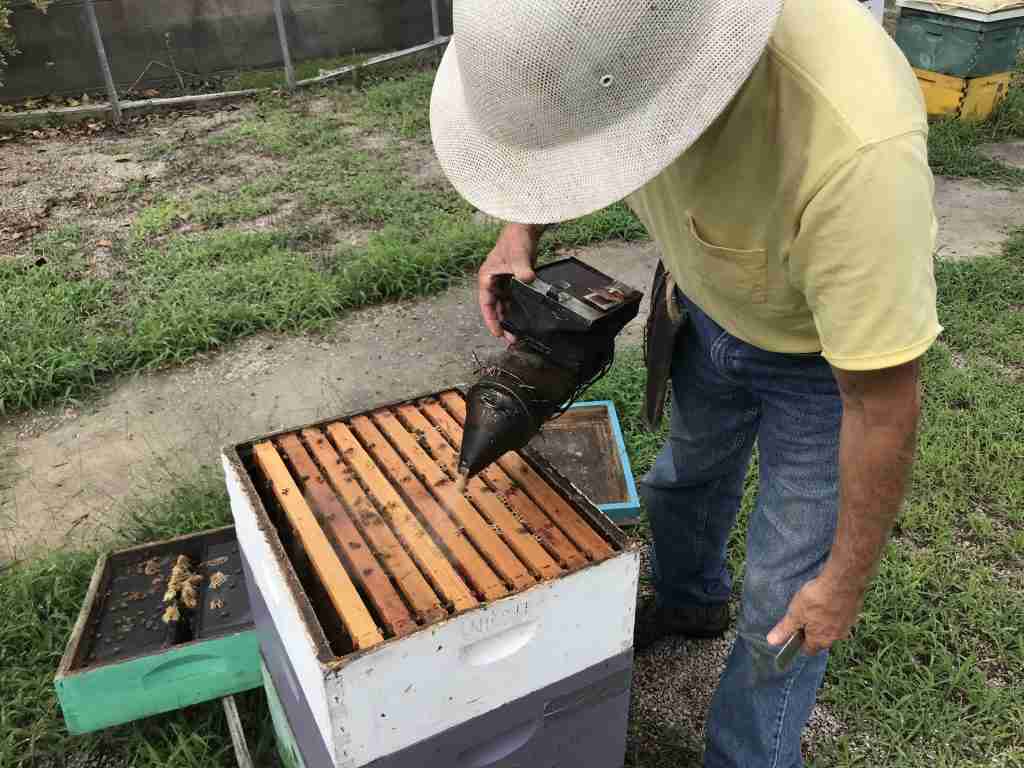 Bee populations in North Carolina are on the upswing, and that means just one thing for beekeepers: you guessed it, more work.

Warmer weather means more bees, and more bees means an increase in the predatory varroa mites that can threaten their broods, according to Don Hopkins, North Carolina Department of Agriculture and Consumer Services Apiary Inspection Supervisor.

“This is something that can be tracked, and that is what we are trying to emphasize. It’s something that really should be tested more frequently than it has been in the past,” Hopkins said. “If there’s a message to take home, it’s just that. More frequent monitoring really is the name of the game.”

Most bee losses occur during December and January, Hopkins said. Bee populations in N.C. were struggling around that time this year but have since rebounded in a major way. Hopkins showed a video of one of the bee colonies outside swarming in early March, generally thought to be about a month ahead of schedule, he said.

The early swarm has much to do with the weather, he said. Bees being so active this early in March means that beekeepers need to be vigilant to make sure they’re properly taken care of.

“What this means is that, since those bees that did make it through the winter made it through in such great shape, they’re now consuming much more food than they have all winter,” he said. “In addition, the mite population tends to chase after the brood population, so it’s going to go up and up. This spring going forward, that same message is even more critical – make sure you are checking your bees often and thoroughly.”

Many beekeepers do not check their hives during the spring, Hopkins said. With mite populations already elevated this early in this season, that could be a dangerous decision this year, as the mites will only multiply from here.

Introduced in America in 1987, varroa mites have since become ubiquitous in beehives. The arthropods nest on the bee brood, where larval bees develop, and feed on the organs known as fat bodies in the abdomen of the insects. By doing this, varroa mites can spread disease and generally cause havoc for bee colonies, similar to how ticks transmit disease to humans.

Popular methods of checking for mites include the “sugar shake” and “alcohol wash” methods. The latter uses alcohol to dislodge mites from adult bees, which Hopkins said is generally more accurate but comes at the cost of killing the bees used. The sugar shake, which involves literally shaking bees in a cup with powdered sugar, is less accurate but does not kill the bees.

If a beekeeper discovers elevated mite levels in their hive, there are as many as ten registered miticides that could help deal with the issue. Each different material has its own set of environmental conditions that need to be met in order for them to function as effectively as possible – some are fumigants that must be applied in lower temperatures, others are not recommended for use in hives being used for honey production, and so on.

In the immediate future, there is another issue entirely that Hopkins is focused on – a potential cold snap right at the end of the bee’s hibernation period. With many colonies running the lowest on food they have been all winter, a freeze right as populations are starting to become active again could be devastating if beekeepers are not paying enough attention.

“Depending on when a freeze hits and what’s in bloom when it hits, it could be real trouble,” he said.

It is up to beekeepers to make sure that colonies are insulated from a surprise freeze.

“The primary concern is making sure they have enough food to get through that period of time,” Hopkins said. “As far as the colony conditions, the bees are pretty much having to deal with that on their own.”

Some people with very small clusters may be able to relocate their colonies to indoor facilities to more carefully control the climate, but that will not be an option for most beekeepers. Options for bolstering food supplies include sugar water and a pollen supplement placed on top of the hive where bees can collect it.

It is important to remember, though, that on the whole bee populations are on the rise. There are challenges that come with that, but overall things are looking up and the demand for bees is high. For more information, including an up-to-date apiary registration form, visit www.ncagr.gov/plantindustry/Plant/apiary/index.htm