In 2012, thousand cankers disease was confirmed in North Carolina for the first time. The invasive disease, responsible for killing walnut trees in walnut groves in the western U.S. and as a new introduction to eastern Tennessee at the time, was a frightening prospect for the state. However, since that time, the disease or its primary vector has not been found in any additional counties in the state. 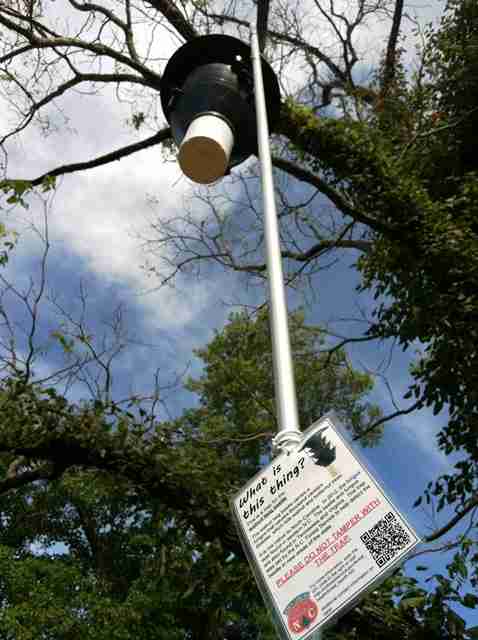 The absence of finds is not due to a lack of looking for it. Each year, the N.C. Forest Service, the Plant Industry Division, and cooperators with Duke Forest set and monitored traps across the state. These traps lure in the walnut twig beetle, the carrier for the fungus (Geosmithia morbida) that causes thousand cankers disease.

This year, 89 traps were set across the state and for the sixth consecutive year, the beetle did not turn up in additional counties within the state.

This beetle is native to the Southwestern U.S. and Mexico. The disease affects black walnut and butternut trees and kills trees within two to three years of symptoms appearing.

The traps used are funnel traps with a lure to attract the beetle. When the small beetles (and other insects) fly into the trap, they fall through the series of funnels into a cup at the bottom containing a killing/preservative solution. Every two weeks, the traps are checked and catches collected and screened.

What does this mean for our state? There will be no new quarantines enacted for the state at this time. Haywood County remains the only county under quarantine for this pest, meaning walnut and butternut material and all hardwood firewood cannot leave the non-quarantined zone without a compliance agreement with the Plant Industry Division. Virginia and Tennessee also have multiple confirmed locations of the disease as well, so there is continued introduction potential from both the west and north. The Invasive Pests in North Carolina map shows the locations of several pests currently being monitored along the East Coast.

North Carolinians are doing a great job keeping this pest contained to a small area.  Remember to buy firewood locally and burn locally.  Moving firewood is the easiest method of moving this disease and many other pests to new areas in our state.