The N.C. Longleaf Coalition recently honored Terry Sharpe, as well as Anne and Fletcher Wright as new members of the North Carolina Longleaf Honor Roll. The Honor Roll recognizes landowners who are working to improve their stands and balance all the values of a longleaf forest such as wood products, wildlife habitat, recreation and aesthetics. The N.C. Longleaf Coalition, who sponsors the N.C. Longleaf Honor Roll, is a group of representatives from government agencies, nonprofits, consulting foresters, landowners and educators working to promote and restore longleaf pine throughout its historic range in North Carolina. 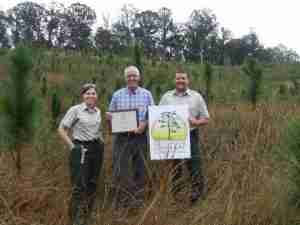 Landowner, forester and wildlife biologist are among the many titles for which Terry Sharpe is well known. The titles converged this fall when Terry was recognized for the North Carolina Longleaf Coalition’s N.C. Longleaf Honor Roll for restoration and management of his 32-acre McCaskill Road property in Richmond County. Brad Allen, Forester with the N.C. Forest Service, nominated Sharpe for his exemplary stewardship of this property. Sharpe was presented with a N.C. Longleaf Honor Roll sign and a framed certificate.

After removing hardwoods and loblolly from the property about 5-years ago, Sharpe planted longleaf pine, as well as native grasses and forbs to restore the native understory. As a Certified Prescribed Burner, Sharpe conducts his own burns with the help of neighbors and friends. In fact, he conducted a controlled burn the year after the longleaf were planted and plans to burn the property again this winter.

The management of this property, which a Certified Tree Farm, is guided by a forest management plan. Sharpe also has other properties that he manages with the same commitment to build forestland into ecosystems rather than simply stands of trees. In addition to the joy it brings him, the wildlife is also benefiting under his management and the trees are healthy. 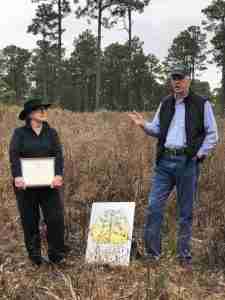 The Wright’s conducted prescribed burning throughout their 88 acres of longleaf pine, and in 2017 established longleaf pine and planted wire grass on an additional 19 acres of their property. In a letter to the Wrights, the N.C. Longleaf Coalition recognized them for their persistence in managing their longleaf stands with frequent prescribed burning and no straw raking, calling their efforts “impressive.”

The Wrights have a Forest Stewardship Plan on their property, retain a registered forester and are enrolled in the Safe Harbor program, which helps to address both the conservation needs of the Red Cockaded Woodpecker and the concerns of non-federal property owners in certain areas of North Carolina.

To protect the property, the Wrights have also permanently placed it under a conservation easement with The Nature Conservancy.

The size of the forest doesn’t matter for recognition in the Longleaf Honor Roll, so long as it meets the eligibility requirements, which include having a current forest management plan, the use of prescribed fire to actively manage longleaf and for longleaf that is less than 5-years old to have at least one non-site-prep prescribed burn. For longleaf greater than 5-years old, at least two prescribed burns must have been completed in the last 10-years.

If harvesting pine-straw, landowners should be raking on rotation with periods of rest and burning to reduce negative impacts from pine straw production.

The coalition also looks for a multi-resource management plan, regardless of whether the landowner is planting seedlings or has mature trees, to ensure that the values of the longleaf pine forest and other timber resources on the property are being managed to maximize their value.

Any natural resource professional can nominate a landowner to the Honor Roll through nclongleaf.org at any time. Nominations will be reviewed and awarded periodically throughout the year. For more information on the North Carolina Longleaf Honor Roll, visit https://www.nclongleaf.org/honorroll.html.