The health of our forests: 2018 year-in-review

Each year, the beautiful forests of our state encounter risks from various threats.  The significance of native pests vary by year, but the threat from invasive pests is only increasing with time. Some, such as the hemlock woolly adelgid and the emerald ash borer, have the potential to wipe out an entire group of trees in the state (hemlocks and ash, respectively). Each year, the N.C. Forest Service (NCFS) Forest Health Branch aims to protect our forests from native and invasive insects alike by monitoring their movement and populations, implementing management, and promoting practices that reduce further harm. 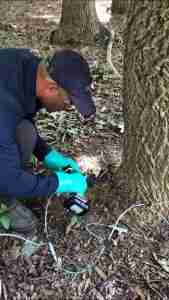 The Ash Protection Program supports the treatment of urban ash trees with a chemical that will protect the tree from the emerald ash borer for 2-3 years. Image: Town of Matthews.

In 2018, the emerald ash borer was detected in 4 additional counties within the state: Halifax, Jackson, Macon, and Transylvania. This brings the total number of affected counties to 37 since its initial detection in N.C. in 2013.

This year, the NCFS launched the Ash Protection Program, a program that provides financial support to communities wishing to protect their urban ash trees with pesticides. Statewide, seven communities protected over 200 trees through this program.

While pesticides are a viable option in urban and landscape settings, it is not typically viable in forest settings. Through cooperative efforts with the United States Department of Agriculture, Animal and Plant Health Inspection Service (USDA-APHIS), the NCFS participates in a long-term management effort by releasing biocontrol agents at sites in Granville, Vance, Wayne, and Forsyth Counties. 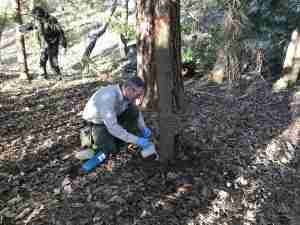 Insecticides, applied as a soil drench, protect hemlocks from the hemlock woolly adelgid for years to come.

The hemlock woolly adelgid (HWA) was first detected in N.C. in 1995 and has since spread to all regions where hemlocks naturally occur in the state.  Hemlocks continue to suffer at an alarming rate from these infestations.

Three years ago, a cooperative effort between the NCDA&CS, WNC Communities, U.S. Forest Service, and NCFS formed the Hemlock Restoration Initiative (HRI). Through this effort, HRI and NCFS staff plan and implement treatment projects. In 2018, over 25,000 hemlocks on state lands were treated. For long-term management efforts to protect hemlocks, HRI continues to release predatory beetles that prey on the adelgids.

The devastating laurel wilt disease was first confirmed in North Carolina in 2011 and is now found in ten counties in the southeastern part of the state: Bladen, Brunswick, Columbus, Cumberland, Duplin, New Hanover, Onslow, Pender, Robeson, and Sampson Counties. In 2018, not only did the disease spread within these already-infested counties, but it was detected in Cumberland County for the first time. This disease primarily affects redbay trees in the coastal plains and the disease pathogen is spread from tree to tree by the redbay ambrosia beetle. This year, the disease was confirmed in sassafras for the first time in N.C. This detection is the most northerly detection of laurel wilt affecting sassafras, a tree with a broad distribution. Surveys to track its spread continue but there are no viable management options available.

Since 2012, when thousand cankers disease was first detected in Haywood County, North Carolina, neither the fungus nor the walnut twig beetle that carries it have been found in additional counties within the state. A quarantine was implemented in January 2013 that prohibits the movement of regulated materials from Haywood County to unaffected areas of the state.

The NCFS works with the U.S. Forest Service and NCDA&CS Plant Industry Division to trap and survey for newly affected areas in the state. In 2018, 89 traps were set statewide; once again, the walnut twig beetle was not found in additional sites within the state. Trapping surveys will continue in 2019 and there are no feasible management options available for this pest.

The entire state of North Carolina has been monitored for gypsy moth since 1982 through a program of the PID. The 2018 trapping season is complete and 594 moths were captured in 343 traps (with a total of 18,786 traps set statewide). This is much fewer captures compared with last year when 1,613 moths were captured in 868 traps (19,869 traps set statewide). These trap captures, along with winter egg mass surveys done in areas with high capture rates, play a role in 2019 treatment determination.  In 2019, four treatment areas totaling 3081 acres are proposed .

The gypsy moth has historically been held at bay from becoming established in North Carolina, with only two counties being quarantined for the pest since 1988 (Currituck County and parts of Dare County).  These two counties remain the only two with a gypsy moth quarantine in place.

The southern pine beetle (SPB) has historically been N.C.’s most significant forest insect pest. From 1999 through 2002, SPB killed at least $84 million worth of timber in North Carolina. Since then, beetle activity has been relatively low until this year.

Each spring, the NCFS sets prediction traps across the state to asses potential impact from this native pest. This year, the NCFS set 39  traps across the state. These traps, plus additional traps deployed by the USFS, indicated that low SPB populations should be expected across most of the state, with the exceptions of traps located in the Cheoah Ranger District (Nantahala National Forest), Macon County, Croatan National Forest, and Appalachian Ranger District (Pisgah National Forest).

The Southern Pine Beetle Prevention Program, funded through a grant from the U.S. Forest Service, partially reimburses non-industrial private landowners in N.C. for the cost of pre-commercial thinning pine stands. This allows remaining trees to grow with less competition, improves the health of remaining trees, and reduces the stand’s susceptibility to SPB. Since the program began, over 74,000 acres have been treated through this program.

This spring, a late season frost led to widespread impacts to oak foliage growth and development in higher elevations of NC. Neighboring states (KY, TN, VA, & SC) also reported the same but damage across the region varied from mild to severe. Many developing leaves and buds were killed from the weather event(s) and surviving leaves suffered necrotic tissue or became stunted, chlorotic, or curled. Damage was recorded on numerous oak species in both the red and white oak groups and there will likely be no long-term health impacts.

In September 2018, Hurricane Florence devastated North Carolina’s coast. It brought wind gusts of more than 100 mph, a pre-landfall storm surge that flooded numerous coastal communities, and record-breaking rainfall for the next several days. The destruction left in her wake devastated the Coastal Plain of North Carolina. While much of the damage was due to flooding, it was the combination of high winds and saturated soils that led to downed and damaged trees.

Areas most affected by hurricane force winds were aerially surveyed. The heaviest timber damage appeared in Craven, Carteret, Onslow, and Jones Counties within 40 miles of the coast. Forest edges suffered the greatest impact. In addition to downed and broken trees throughout the Coastal Plain, hardwood trees had sparse foliage on the windward side because of high sustained winds. In all, an estimated 1,251,312 acres of forestland received some level of damage, causing an estimated $69.6 million in damage. 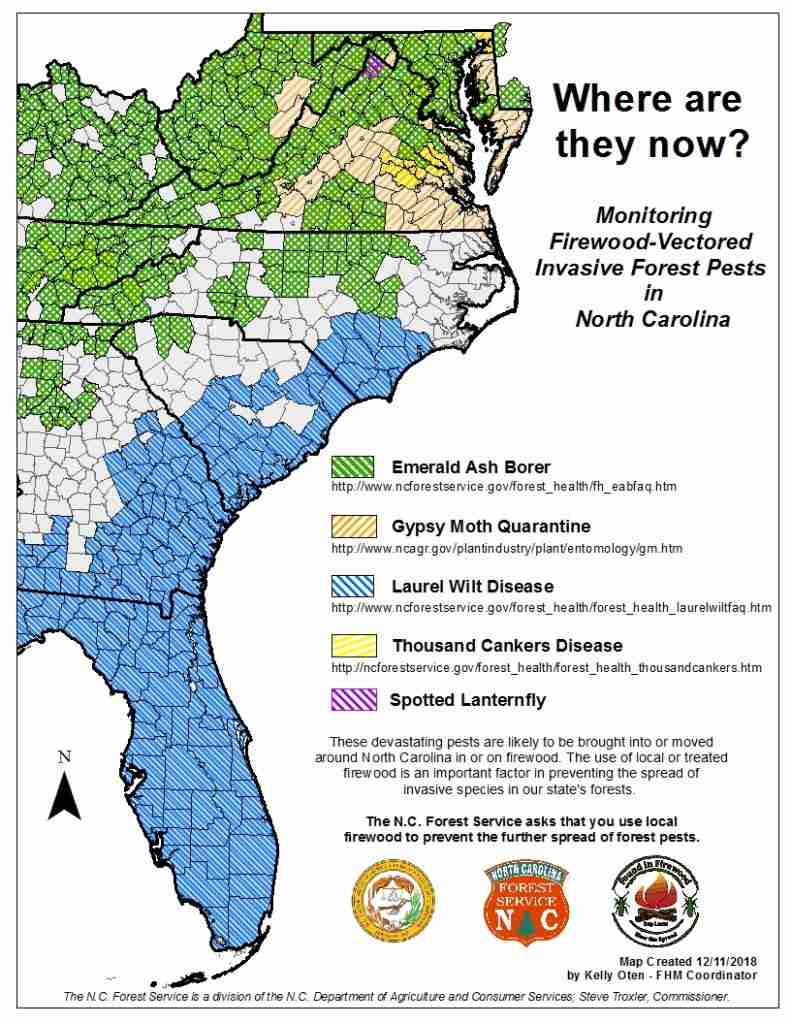