Not too late to get your fresh North Carolina Christmas tree 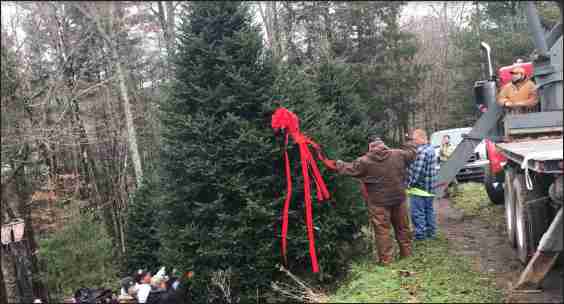 The fifth time proved to be the charm for Christmas tree grower Larry Smith of Newland. Smith won the National Christmas Tree Association’s annual tree contest on his fifth try, and with it, the right to provide the official White House Christmas tree.

“It’s like winning the Super Bowl,” Smith told a gaggle of reporters gathered for the cutting and send-off of the tree. Putting a Christmas tree in the White House has been a goal since he started tree farming in 1977. “Now, I guess I’ll have to set a new goal,” he said.

That 19-and-a-half-foot tree arrived at the White House Nov. 19 and Smith and his family were on hand for the presentation.

On a separate visit to the farm, representatives from the White House selected the tree that Smith noted had been basically abandoned. “We probably hadn’t trimmed that tree in a couple of years, but that was part of what drew the attention of the White House staff. They liked its natural look,” he said.

Smith’s chainsaw needed less than a minute to free the roughly 800-pound tree, which required a crane to hold it upright and then hoist it onto a flatbed trailer for transport to a send-off celebration at the Mountain Glen Golf Club in Newland.

The tree was loaded onto a N.C. Department of Agriculture and Consumer Services Food Distribution tractor trailer to begin its journey to Washington D.C.

North Carolina is the second largest producer of Christmas trees in the country, selling about 4.3 million trees annually for about $85 million in sales. In total, the state has 37 million trees planted on 32,000 acres across the state.

“Consumers can have their own fresh North Carolina Christmas tree this holiday season,” said Agriculture Commissioner Steve Troxler. “You will find plenty at pick-your-own farms, roadside stands and at retail stores, too. When you want the best, it’s Got to Be NC Christmas trees.”