Bagworms on the Move

Everyone expects pinecones to fall to the ground and stay put, so when one encounters a small ‘pinecone’ crawling across the ground, it is often met with surprise! Since when did pinecones have legs!? Fear not: evolution hasn’t taken us that far yet! These ‘crawling pinecones’ are actually leaf-eating insects called bagworms. Not really worms, bagworms are moth larvae that feed on conifers and occasionally some hardwoods. 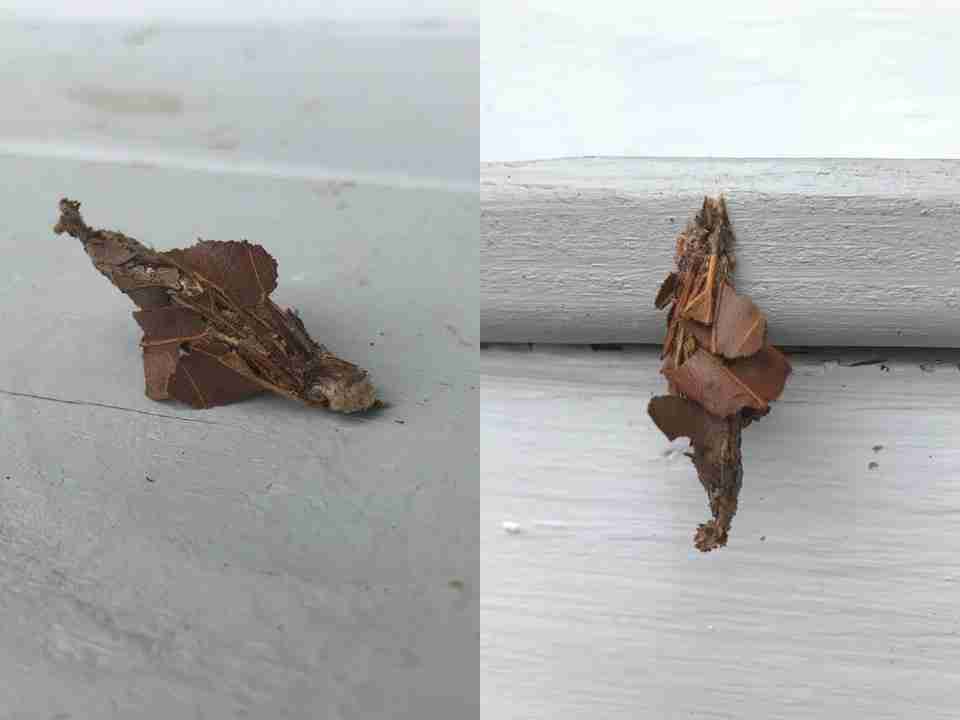 As pests of ornamental conifers, bagworms are usually found on their host plant. However, sometimes they wander off the plant, surprising people who see this moving “pine cone”. In late July, this bagworm crawled across a porch in Apex (left), eventually hanging down and pupating on the same porch (right). Image: K. Oten, NCFS.

When it comes to its pine cone-like case, bagworms take a DIY approach. As they feed on tree leaves, they cover themselves in a silken bag composed of leaves clipped from the tree on which they’re feeding. As they eat and grow, the bag grows too. Typically, bagworms eat and pupate on the host plant, but occasionally larvae crawl off or dangle down from a silken strand from their host plant in search of a pupation site. This is when they are noticed crawling across driveways or porches, out of context from their usual habitat.

Bagworms are fairly common, and although they may seem harmless, they can cause substantial damage to ornamental conifers such as junipers, Leyland cypress, baldcypress and arborvitae. Infestations can be severe and may cause branches, and sometimes the entire tree, to die. Luckily, you can combat infestations by hand-removing and destroying the bags of growing larvae or adult females (in the growing season and winter, respectively) or by applying an insecticide in the early summer when larvae are feeding.

So, don’t be alarmed when you see one crawling across your patio… instead, take a look at your trees for more of these cryptic critters!