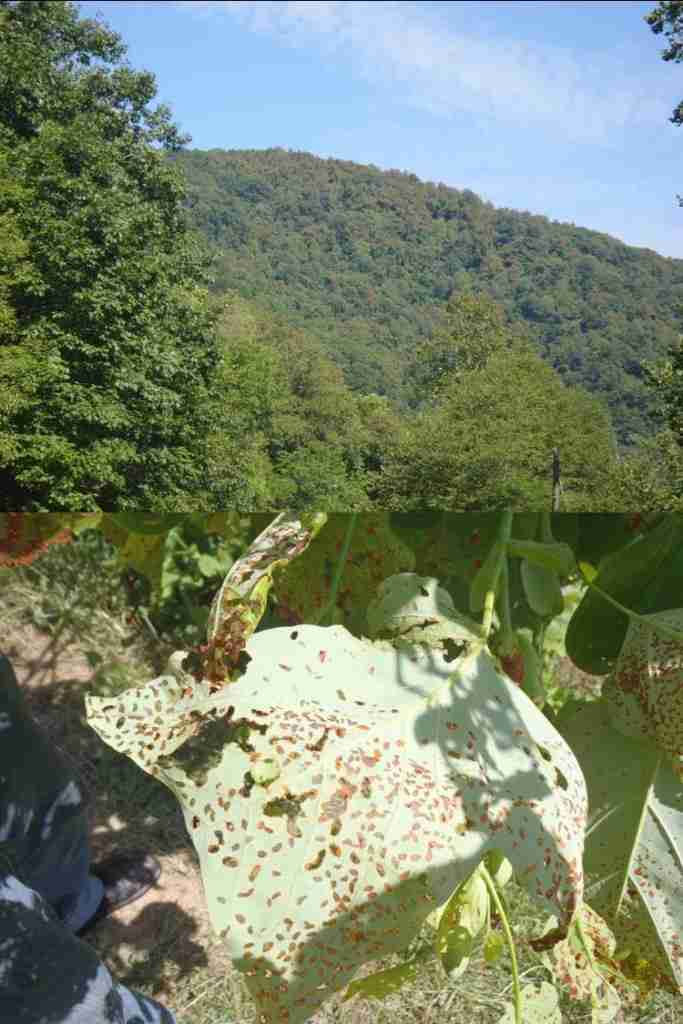 In 2015, an outbreak of the yellow-poplar leaf mining weevil causes an entire hillside to turn brown. Bottom: close-up of the damage. Image: B. Heath, NCFS.

In 2015, an outbreak of the yellow-poplar leaf mining weevil caused widespread browning and defoliation of yellow-poplar trees in western N.C. The event was unexpected, as this native insect causes insignificant damage most years. Now, three years later, this weevil is popping up once again.

The yellow-poplar leaf mining weevil can be found throughout the eastern U.S. It prefers to feed on yellow-poplar trees (also called tuliptree), but may also attack magnolias and sassafras. Adults feed on the underside of leaf surfaces, leaving distinct brown holes shaped like a curved grain of rice. Immature larvae feed inside the leaf, between the upper and lower layers of the leaf surface (a feeding habit called “leaf mining”). Feeding by both stages of the weevil cause leaves to turn brown and die. This damage temporarily reduces the aesthetic value of landscape trees, but typically does not cause long-term impacts to tree health. Damage may also cause growth loss or affect the form of younger trees.

Most years, the weevil is not a threat to yellow-poplar timber; feeding damage is so minor, it goes unnoticed. However, sporadic outbreaks do occur from time to time. Most notable, in the 1960s, extensive outbreaks occurred in the Appalachian Mountains, causing significant foliage loss.

To manage this insect, promoting general tree health is best. The outbreak should subside on its own, especially with the help of natural enemies. In severe cases, there are pesticide options available but correct timing is critical and treatments must often be repeated.

So, if you see hillsides of yellow-poplar not looking so hot this summer, keep in mind, its temporary. We can expect this weevil to bug out before next year.