Nestled in Cary, Hemlock Bluffs Nature Preserve is home to an isolated population of more than 200 eastern hemlock trees. Hemlocks, primarily found in the mountains, are long-lived evergreens prized in nature for their vital role in the ecosystem and valued in landscapes for their graceful appearance and response to pruning. Remnants from an era of cooler temperatures thousands of years ago, this unique pocket of a mountain tree species in the middle of the Piedmont is a beloved natural area of Cary. 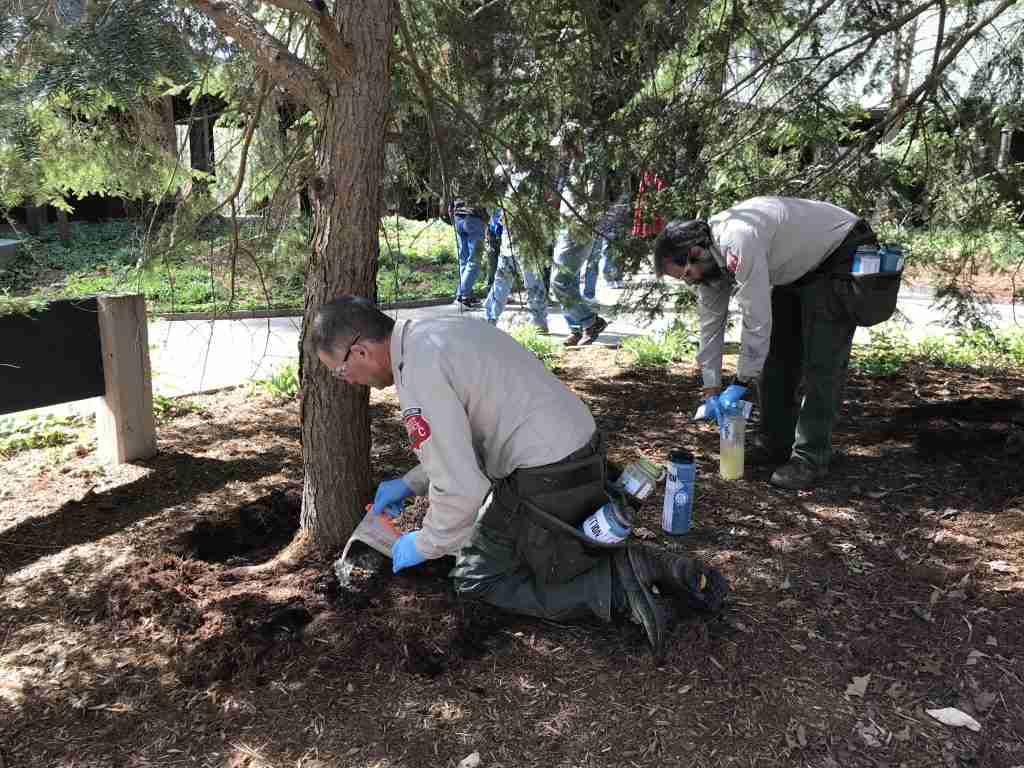 Craig Lawing and Brian Heath (N.C. Forest Service) protect the three large hemlocks near the Stevens Nature Center at Hemlock Bluffs. By using a soil drench method, roots drink up the chemical and disburse it throughout the tree, protecting it for years to come. 110 hemlocks were treated at Hemlock Bluffs Nature Preserve in April 2018. Image: K. Oten, NCFS.

However, keeping these trees healthy has become a bigger task in recent years. In the 1950s, the hemlock woolly adelgid, a small aphid-like insect, was introduced from Japan to Virginia when an infested hemlock was shipped here and planted. The adelgid began to attack our native hemlocks, spreading throughout our forests and leaving behind towering dead trees. In 1995 it was first found in western N.C. and in 2010, the adelgid was discovered at Hemlock Bluffs Nature Preserve.

Upon its discovery there, a mystery began to unfold: How did the adelgid get to Hemlock Bluffs in the first place? This pocket of hemlock trees is hundreds of miles from the hemlocks of NC’s mountains. Adding to that, adelgids are wingless and cannot easily move to new areas on their own. In nature, close-range dispersal is accomplished by hitchhiking on animals or being blown in the wind from tree to tree. However, the biggest threat for long-term spread is right under our noses: humans.

By far, the easiest way for adelgids to move hundreds of miles is for people to move them. It’s how the adelgid got here in the first place, after all. The movement of hemlock seedlings for landscape plantings can be devastating if they’re infested. In and around Cary, there are countless hemlocks planted in yards. Where these trees came from and whether or not they are infested with adelgids is unknown. Any of these trees could easily harbor the adelgid if they go unnoticed or untreated. 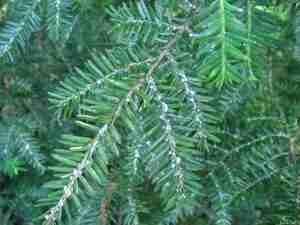 Infestations of the hemlock woolly adelgid can be identified by looking for white, woolly masses on the underside of hemlock branches. Image: B. Heath, NCFS.

But what can be done? Well, knowing is half the battle. Homeowners are encouraged to inspect their hemlocks regularly for the woolly, white appearance of adelgids on the undersides of branches. Infested trees can be treated with insecticides to protect them from the adelgid. Not only does this ensure the prolonged health of their own trees, but it reduces the risk that adelgids continue to re-infest Hemlock Bluffs.

The most effective way of protecting hemlocks from the hemlock woolly adelgid is with proper use of insecticides. This spring, forest health specialists from the N.C. Forest Service treated 110 hemlock trees at Hemlock Bluffs Nature Preserve to kill the adelgids present and to protect the trees for years to come. While the infestation and treatment of hemlocks in Cary is a compelling story about the protection of a unique natural resource, it’s only the tip of the iceberg when it comes to the cooperative efforts between the N.C. Forest Service and the Hemlock Restoration Initiative.  The trees treated at Hemlock Bluffs in April were part of a greater endeavor that saw more than 20,000 trees protected statewide in the past two years!