Deadly Laurel Wilt Disease Found in Sassafras for the First Time in N.C.

In 2002, an uninvited guest made itself at home in the U.S. when the redbay ambrosia beetle was unintentionally introduced near Savannah, GA. By itself, the beetle would probably not be a big deal. However, it carries with it a deadly weapon: a fungus capable of killing redbay trees and other plants in the laurel family. When this fungus infiltrates a redbay, the tree dies in a matter of weeks. 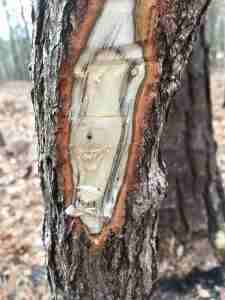 At a faster pace than expected, the disease spread. In 2011, laurel wilt was first detected in North Carolina. Since then, it has spread to 10 counties in southeastern North Carolina. Driving through that part of the state, it is not hard to find a redbay tree dead from laurel wilt. As of earlier this year, redbay was the only known host-plant to be affected by the disease in N.C… until now.

In April 2018, a team of forest health professionals from the N.C. Forest Service – Forest Health, U.S. Forest Service – Southern Research Station, and N.C. State University – Department of Forestry and Environmental Resources were documenting the spread of laurel wilt when they discovered a pocket of approximately 20 dead sassafras trees. Upon closer inspection, the characteristic streaking of the inner bark associated with laurel wilt was found. Samples were sent off and confirmed in lab using fungal cultures and genetic analysis. The verdict was in: laurel wilt had killed the sassafras.

This is not the first time laurel wilt has been found killing sassafras in the U.S. Several other states in the Southeast where laurel wilt is running rampant report widespread sassafras mortality caused by the disease. However, it is the first time the disease was confirmed in sassafras in North Carolina. Before this confirmation, there were two other sites in N.C. where a single sassafras tree was found dead and exhibited symptoms consistent with laurel wilt, but the fungus was not confirmed. Like redbay, sassafras is in the laurel family. Other plants in the laurel family include spicebush, pondspice, and pondberry. Pondberry is a federally endangered species and pondspice is a species of special concern in North Carolina. Neither of them have been found to be infested in natural settings but lab tests indicate they would be susceptible.

While redbay trees are confined to the Southeastern Coastal Plains, the range of sassafras is much more extensive. It is scattered not only across North Carolina, but northern margin of its range reaches into Michigan in the Midwest and Maine in the Northeast. Because of this, the impact of laurel wilt may cover a much larger geographic area than if it affected redbay alone.

So, keep an eye on the sassafras near you! Laurel wilt disease, once thought to be confined to the coastal plains, will soon be making waves across the state.