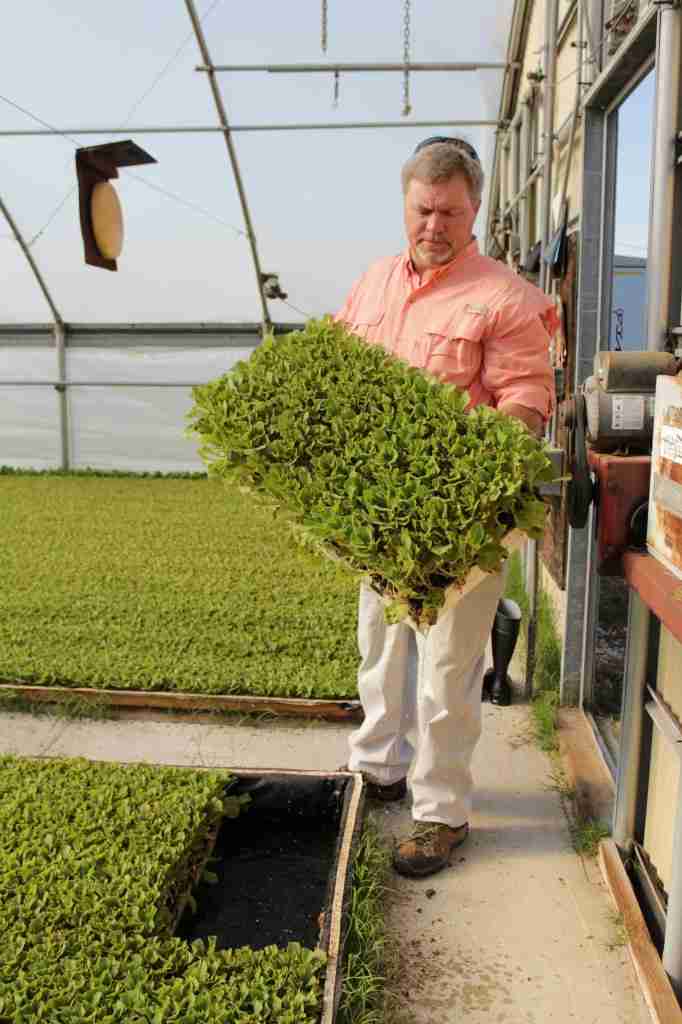 Cool, wet weather has delayed plantings in all regions of the state according to N.C. Department of Agriculture and Consumer Services’ regional agronomists.  Regional agronomists located across the state work individually with farmers to help troubleshoot problems and increase crop production. They are the department’s crop advisors. Regional agronomists work with individual farmers to provide guidance on crop nutrient and/or parasitic nematode problems. RA’s use the Agronomic Services laboratory services to help come up with solutions to a farmer’s unique problems.

“While late planting will have no direct effect on yield or harvest date,” said Michelle McGinnis, Agronomic Field Services section chief, “factors such as too much rain, not enough rain, temperature, pest pressure and bad management will have an impact on yield and harvest dates.” Check out some observations from regional agronomist on how the weather is affecting crops across the state:

” A few farmers that tried planting corn around Easter, but three weeks later nothing had emerged, so those areas would have to be replanted. Some soybeans and corn had been planted before the last big rain event and seem to be doing good. It’s now drying out and farmers are in full swing to get crops in the ground.” Carla Pugh, Region 2

“Region 3 has been cool and wet since February.  Growers have struggled to prepare and fumigate land for tobacco and to plant corn.  Generally speaking, our growing season is running two weeks behind normal for several crops, but the weather this week will allow us to catch up in a hurry.” Chris Jernigan, Region 3

“Cold weather seems to have not caused a delay in corn planting or tobacco transplanting when compared to significant rainfall events.  On average, farmers are behind a week planting corn and transplanting tobacco.  Region 4 received anywhere from 1.5 to 5 inches of rain as a result of the last weather system that occurred the last week of April.  Crops that have been planted have experienced slow growth due to cool, saturated soil conditions and below-average nighttime temperatures.  Significant progress should be made this week due to more favorable planting conditions.” Tyler Whaley, Region 4

“The corn crop was planted about a week later than usual.  What was planted during the first week in April took as much as 10 days to come up in some cases. There are some fields that have been replanted due to poor germination and crusted soils preventing emergence. For the most part, the corn crop looks great despite some stand issues in bottoms and heavy residue.  Soybeans, cotton and peanuts looks to be relatively on time, if we can receive adequate moisture to continue planting.  Parts of the region are very dry while others received excessive rains during the past week to 10 days.  Tobacco planting was delayed about a week but most growers will make great strides this week due to warm, less windy conditions.” Georgia Love, Region 5

“The cold weather appears to have been beneficial to the strawberry crop, a cool season plant.” Mike Wilder, Region 6

“First and foremost was the cooler-than-normal soil temperatures that led many to delay planting to avoid the rotting of seed before it could germinate. Soils were also saturated by the time many growers would considering early planting. The continued threat of frost, killing frost was also a consideration for not only corn but tobacco transplanting, too.” Don Nicholson, Region 7

“Cold and wet weather in April has caused the corn crop to be slightly delayed from normal years by about two weeks. Tobacco transplanting has just barely begun which would put it one to two weeks behind schedule. Cool weather has delayed heading in small grain crops this spring which could cause issues with grain fill if the weather turns hot and dry during May. While the strawberry crop has not been as early as last year, the crop overall looks to be on track as far as yield and quality. Crops such as lettuce, greens and beets are delayed about two weeks. In comparison to last year, those crops were beginning to hit the market the first of May. Cool and wet weather has also caused some phosphorus deficiencies to show up on greens and depending on variety has caused them to be unmarketable due to purpling.” Brandon Poole, Region 8

“Cold weather has caused some delays in Region 9, but excessive rains have caused more delays than anything. The cold snap on April 16 and 17, after a week of warm weather, stopped a lot of corn planting in the region, but it picked up fairly quickly after that. Tobacco transplanting is definitely behind across the board, with many growers in Randolph County still trying to prepare beds due to wet weather.” Josh Mays, Region 9

“Corn is 85 to 90 percent planted in my area. The only areas not planted is bottom land that has been too wet or has the potential to flood. Soybean and cotton has started being planted this week with no major delays. Wheat and barley crops are looking good. Strawberries took it the hardest last week with around four inches of rain over four days. Berries that were ripe were lost due to quality. Luckily, most growers are just starting their season and have plenty of berries to make up for the loss.” Daniel Overcash, Region 11

“A significant rain event April 22-24 brought three to five inches of rain to grain growing area of Region 12. The corn planting window has been delayed  seven to 10 days. About 25 percent of the corn was planted before this event. Colder-than-normal temperatures during this period have contributed to delayed emergence. Impact on stand and early growth has yet to be determined. Long season bean planting has been delayed as well.  No tobacco has been planted yet in Region 12. Growers will normally have 10 to 20 percent of their crop in the ground by May 1.” Dwayne Tate, Region 12

“Rain and cold weather have delayed plantings in the region, but is not that far off the normal planting window in western North Carolina. Brassicas and lettuce that were planted early have not grown well due to the weather.  Farmers began planting tomatoes in the region last week and have started planting corn this week. Most fields have dried enough to plant and the forecast looks favorable for farmers to catch up this week and next.” Chris Leek, Region 13