Testing the Waters: Searching for a Tree-Killing Disease Hiding in N.C.’s Streams

In 2004, an uninvited guest was found for the first time in North Carolina when plants infected with the sudden oak death pathogen were discovered in several nurseries. Apprehension grew quickly, as sudden oak death is responsible for the devastation of oak and tanoak forests in California and Oregon. Luckily for us, it was only a guest and the disease has not taken up permanent residence in our native forests… yet. 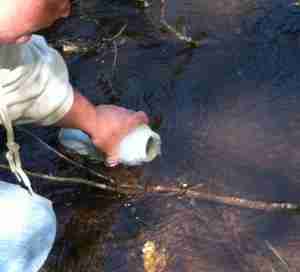 Although named for the oaks it kills, the disease can affect much more than just oaks. It has been identified on more than 100 plants including rhododendrons, camellias, Pieris, mountain laurel, viburnum and lilacs. Not all host plants show symptoms of disease when infected; therefore, the risk of the disease going unnoticed and perhaps moving to new areas is high.

Sudden oak death is also a misnomer in a second way. Rather than succumbing quickly as the name ‘sudden’ oak death suggests, affected plants do not die suddenly. Instead, death occurs slowly over a period of a few years. Because of this, it may be several years until the disease is noticed when introduced to a new area.

Luckily, the disease has only been found on those plants in the nurseries and has not been found in our forests affecting our native trees. But given the potential impact of this disease, we still look for it every year.

The N.C. Forest Service has been vigilantly searching for the pathogen that causes sudden oak death in streams throughout the state ever since its find more than a decade ago. The goal is to detect the pathogen before it causes destruction in our forests. Spores of the sudden oak death pathogen can travel via streams and rivers; therefore, stream water samples downstream from nurseries that may have contaminated plants are taken to search for its presence.

To date, sudden oak death has not been found in the forest ecosystems of North Carolina. We remain vigilant in our hunt for this disease, because in recent years, the pathogen has been found in several N.C. nurseries on plants shipped from the West Coast. While these plants were destroyed, there remains the chance that the pathogen escaped into our forests before infected plants were destroyed or that some infected shipments may have gone undetected.