During a recent meeting in Raleigh, Chief Deputy Commissioner N. David Smith honored NCDA&CS employees for their outstanding achievements, commitment and service to the department. Dr. Jimmy Tickel and Mark Howell received the December 2017 Employees of the Month Award, Dalton Buchanan was honored as the 2017 Employee of the Year and N.C. Forest Service was honored for their Governor’s Award for Excellence nomination. We’ve included photos from the awards presentation, as well as background each employee’s nomination. Congratulations to all the winners! 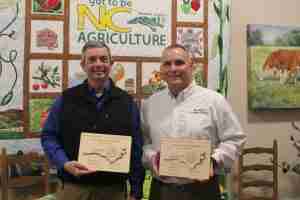 Following Hurricanes Irma and Maria, NCDA&CS was asked to assist with disaster response and recovery efforts in Puerto Rico and the U.S. Virgin Islands. Both Jimmy and Mark volunteered to join the emergency management missions to assess the damages and respond to the agriculture needs on the devastated islands.

Upon arriving in Puerto Rico, Mark and Jimmy learned that the damage to the island included the complete loss of the poultry industry (3.6 million birds), destruction of coffee, plantain and banana crops and Puerto Rico’s No. 1 industry, dairy farming, was barely functioning due to loss of power and extreme fuel shortages.

Jimmy and Mark brought the agriculture interests of the island to the attention of FEMA and other agencies. During their two-week deployment, they spearheaded an unprecedented $12 million USDA grant for the dairy industry focused on providing fuel, feed, veterinary support and a cache of generators to aid in the power shortage. 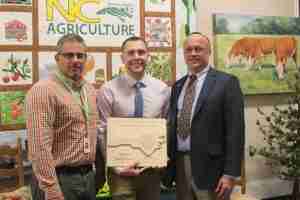 Dalton Buchanan, 2017 Employee of the Year

Dalton received the June 2017 Employee of the Month award for stepping up and taking on additional duties when a coworker died unexpectedly in a tragic accident. After the accident, Dalton researched and trained on how to use a robotic total station and GPS rover so he could provide surveying assistance to soil and water conservation clients.

He served as a soil scientist and surveyor for the region for six months. Jeffery Young, who nominated Dalton wrote that “Dalton took the initiative to learn the operation of state-of-the-art survey equipment to meet client needs and deadlines.”

Dalton was nominated for showing a strong commitment to providing good customer service. His dedication to the department shows that no matter the circumstances, NCDA&CS employees are prepared to rise to the occasion to serve the people that count on us every day. 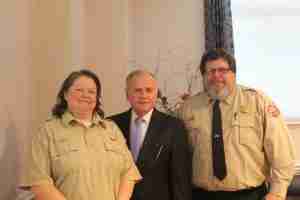 Forest Service employees have responsibilities ranging from clerical to aviation and all points in between. Those wide-ranging duties were tested in the fall of 2016 with the wildfires that raged in western North Carolina.

The fires threatened homes and businesses, including public and private property. Decisions had to be made balancing the cost of evacuation and the subsequent loss of revenue vs. the danger of not doing so. The Forest Service assessed the situation and coordinated with local officials to provide housing, equipment, generators, water and other necessary supplies for residents in need. But, they also did the important work of putting out the fires.

The Forest Service spent countless hours on the job, away from their families, for up to 21 days at a time to battle those fires. And they did so without losing a single structure and without a single loss of life. They were nominated for their bravery, service and sense of duty to the department and the citizens of North Carolina.