Southern pine beetle on the rise across the South

Smaller than a grain of rice, the southern pine beetle (SPB) is considered “the most destructive forest pest in the South”. This menacing label appropriately reflects the devastation it can cause, with outbreaks capable of costing millions of dollars between lost timber and management costs.

Fortunately, SPB outbreaks are cyclical, typically occurring every 10-15 years. The last outbreak in N.C. ended in 2002, 16 years ago.

Last year, predictive trapping suggested a rise in SPB activity would occur in parts of western N.C. and in Croatan National Forest. While SPB was not an issue in eastern N.C., it made itself known in the western part of the state. 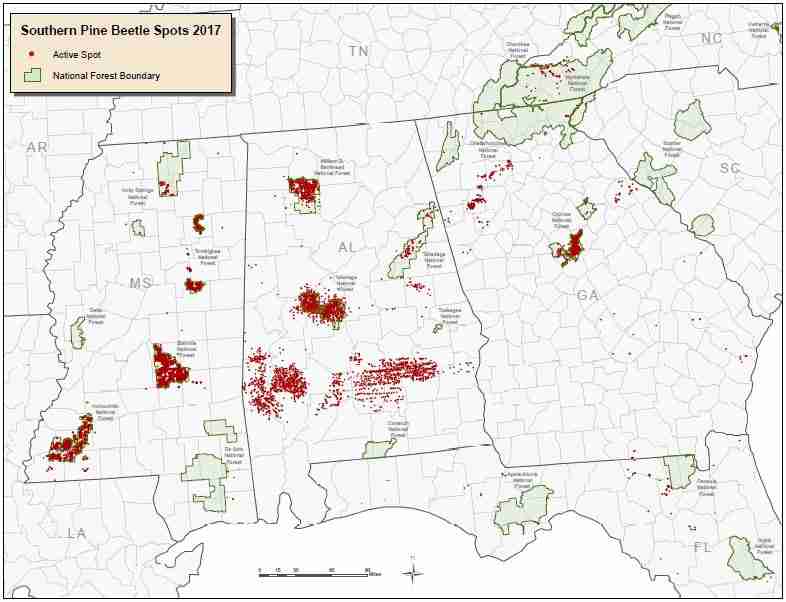 Southern pine beetle spots across the South in 2017. Map: USFS

In and near Nantahala National Forest in western N.C., more than 50 SPB spots were detected from ground checks and aerial surveys. That sounds like a lot, but it is minor relative to the activity recorded across the South. Areas in Mississippi, Alabama, and Georgia experienced heavy SPB activity, much of it on National Forests. In Homochita, Beinville, Tombigbee, and Oconee National Forests and Taladega Oakmulgee Ranger District, there were 5,799 SPB spots totaling 12,027 acres. There were also scattered spots on state and private lands caused SPB and/or Ips engraver beetles.

So, how can forest land managers be prepared for what SPB has in store for us this year? Those who own or manage pine forests should not only stay vigilant for SPB threats, but ensure stands are well-managed.

Prevention should occur before there’s a problem. The most at-risk stands are those that are overstocked, creating an environment where pines compete with one another for resources and are not in optimal health. The single most-effective way to reduce risk to SPB is to thin a stand and reduce tree density. To encourage thinning stands and reducing susceptibility, the Southern Pine Beetle Prevention Program is available. This program alleviates costs associated with thinning practices. Land managers should contact their local N.C. Forest Service County Ranger for details.

Understanding the current threats can also aid in preparedness for an outbreak. Land managers should regularly monitor pine stands for southern pine beetle activity. The more quickly a spot is noticed, the more quickly it can be eliminated to reduce timber losses and management costs. They should also be aware of the current year’s southern pine beetle predictive trapping results, published as a Forest Health Note and on this blog late each spring.