Even a Tree has its Ups and Downs: Weather fluctuations & tree health 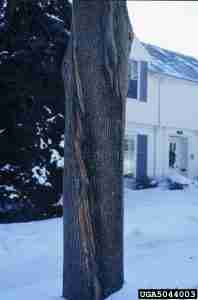 Dramatic drops in temperature may cause frost cracks in your most beloved trees. Image: J. Obrien, USDA Forest Service, Bugwood.org.

Furnaces are cranking and fireplaces are roaring as cold weather gets a firm grip on North Carolina. If you’ve been in North Carolina long though, you are probably already hoping for and expecting a reprieve with warmer weather. Unfortunately, while weather fluctuations are all too familiar to us, they are more likely to damage trees than simply extreme cold temperatures.

When temperatures fluctuate significantly and rapidly, trees are less able to acclimate from exposure than they would from slowly falling temperatures. Sudden, hard freezes are notorious for damaging plants that have not reached dormancy yet.

One of the most dramatic types of injury caused by extreme fluctuations in temperature are frost cracks.  Frost cracks occur when a sudden drop in temperature causes the outer layer of wood to contract more quickly than the inner layer, resulting in a long, vertical split in the trunk. They often appear on the south or southwest side of the trunk, where the greatest fluctuations occur as the sun warms that side in the day before the frigid night temperatures set in. 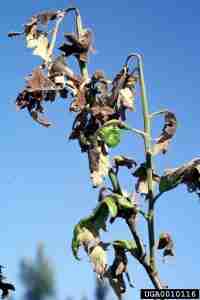 A late frost can cause young foliage to become flaccid, darkened, and wilt. Image: A. Boone, SC Forestry Commission, Bugwood.org.

Sometimes dramatic freezes occur when spring foliage growth has already begun. A late frost can be responsible for damaging tissue already de-acclimated from the winter’s temperatures. The most vulnerable tissues are young stems, new foliage, and buds or blossoms. After freezing, these succulent tissues droop and wither, closely resembling symptoms of many blight diseases. Fortunately, there are some ways to protect your trees and shrubs preceding a late frost.

So be glad you can bundle up and rush inside this winter while trees are left to face the ups and downs Jack Frost has in store.  And always look forward to the warm weather sure to be right around the corner.