The health of our forests: 2017 year-in-review

Every year, the beautiful forests of our state are at risk from ominous threats.  Native insects come and go in significance, but the threat from invasive insects is only increasing with time. Some, such as the hemlock woolly adelgid and the emerald ash borer, have the potential to wipe out an entire group of trees in the state (hemlocks and ash, respectively). Each year, the N.C. Forest Service (NCFS) Forest Health Branch aims to protect our forests from native and invasive insects alike by monitoring their movement and populations, implementing management, and promoting practices that reduce further harm.

In 2017, the emerald ash borer was detected in 9 additional counties within the state: Alamance, Avery, Cabarrus, Caswell, Haywood, Mecklenburg, Mitchell, Rockingham, and Surry.  This brings the total number of affected counties to 33. The emerald ash borer was initially detected in N.C. in 2013. By 2015, its scattered distribution led to the entire state being placed under state and federal quarantines.  The quarantines, which regulate the movement of ash material and the insect itself, aim to prevent the further spread of this pest to non-infested areas by mitigating its accidental transportation within infested materials such as firewood. 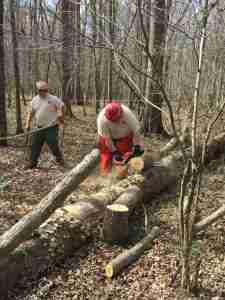 In urban or landscape settings, management of emerald ash borer is possible with insecticides, but this is not a viable option in forest settings. Through a cooperative effort with the U.S. Department of Agriculture – Animal and Plant Health Inspection Service (USDA-APHIS), the NCFS Forest Health Branch became a part of a national biocontrol effort in 2013 by beginning to release parasitoid wasps at several sites in Granville, Vance, and Wayne Counties.  The wasps target and kill the emerald ash borer.  More than 65,000 wasps have been released in N.C. to date. The NCFS Forest Health Branch is also working with NCDA&CS Beneficial Insect Lab to collaborate on research with the USDA-APHIS Emerald Ash Borer Biocontrol Program to improve our understanding of the wasps released. Different species of the wasps emerge at different times in the season, so understanding when specific life stages of emerald ash borer are available to them as food is critical in a successful release program. Early in 2017, infested ash trees were cut, debarked, and emerald ash borer life stages recorded. The NCFS and BIL will continue this collaborative research into 2018.

The hemlock woolly adelgid was first found in N.C. in 1995 and can now be found in every county where hemlocks occur in the state. In western N.C., hemlock mortality from this invasive insect is evident and efforts to manage the adelgid have been ongoing for years. 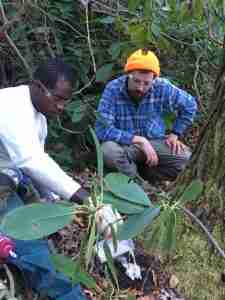 Crews treat hemlock trees with pesticides that will protect them from the hemlock woolly adelgid. Image: B. Heath.

In 2015, a cooperative effort between NCDA&CS, WNC Communities, U.S. Forest Service, and NCFS formed the Hemlock Restoration Initiative (HRI).  HRI works to address long-term hemlock woolly adelgid management and hemlock restoration on state and private lands in N.C. Short-term protection is critical in keeping the hemlocks that have survived to date. In 2017, HRI and NCFS staff worked together to treat more than 10,000 hemlocks on state lands. In attempts to implement long-term sustainable management, HRI has released more than 2,300 predatory beetles that prey on the adelgids.  In addition, HRI collaborates with the Forest Restoration Alliance who is leading a search for hemlocks in forested areas that have survived the onslaught of hemlock woolly adelgid.  Their goal is to find trees with potential resistance to the adelgid for future breeding tree programs.

The devastating laurel wilt disease was first confirmed in North Carolina in 2011 and is now found in nine counties in the southeastern part of the state: Bladen, Brunswick, Columbus, Duplin, New Hanover, Onslow, Pender, Robeson, and Sampson Counties. While the disease has spread within these already-infested counties, there were no new county records in 2017. This disease affects primarily redbay trees in the coastal plains and the disease pathogen is spread from tree to tree by the redbay ambrosia beetle.  Surveys to track its spread continue but there are no viable management options available.

Since 2012, when thousand cankers disease was first detected in Haywood County, North Carolina, neither the fungus nor the walnut twig beetle that carries it have been found in additional counties within the state. A quarantine was implemented in January 2013 that prohibits the movement of regulated materials from Haywood County to unaffected areas of the state.

The NCFS works with the U.S. Forest Service and NCDA&CS Plant Industry Division to trap and survey for newly affected areas in the state. In 2017, 88 traps were set statewide); once again, the walnut twig beetle has not been found in additional sites within the state. Trapping surveys will continue in 2018 and there are no feasible management options available for this pest.

The entire state of North Carolina has been monitored for gypsy moth since 1982 through a program of the PID. The 2017 trapping season is complete and 1,613 moths were captured in 868 traps (with a total of 19,869 traps set statewide). This is fewer captures than last year (2016) when 7,235 moths were captured in 3,172 traps across the state. These trap captures, along with winter egg mass surveys done in areas with high capture rates, play a role in 2018 treatment determination.  In 2017, 9 treatments at 6 sites were conducted with mating disruption, Btk, or Gypchek. In 2018, treatments are proposed at 10 sites totaling 96,043 acres.

The gypsy moth has historically been held at bay from becoming established in North Carolina, with only two counties being quarantined for the pest since 1988 (Currituck County and parts of Dare County).  These two counties remain the only two with a gypsy moth quarantine in place.

The southern pine beetle (SPB) has historically been N.C.’s most significant forest insect pest. From 1999 through 2002, SPB killed at least $84 million worth of timber in North Carolina. Since then, beetle activity has been relatively low until this year.

This spring, the NCFS set 33 SPB prediction traps across the state. These traps, in addition to traps deployed by the U.S. Forest Service, indicated that low SPB populations should be expected across most of the state, with the exceptions of traps located in the Croatan National forest, Macon County, and Appalachian Ranger District (Pisgah National Forest).  Traps in these sites indicated we could expect increasing and high, moderate, and low SPB populations, respectively.

Reports of SPB activity began trickling in this spring and by mid-summer, it was clear that SPB was going to be a problem in the southwestern area of N.C.  In July, aerial surveys detected 54 SPB spots totaling approximately 222 acres on state and private lands.  It is suspected that previous drought conditions played a significant role in pre-disposing these forests to SPB.

The Southern Pine Beetle Prevention Program, funded through a grant from the U.S. Forest Service, partially reimburses non-industrial private landowners in N.C. for the cost of pre-commercial thinning pine stands. This allows remaining trees to grow with less competition, improves the health of remaining trees, and reduces the stand’s susceptibility to SPB. Since the program began, nearly 72,800 acres have been treated through this program.

2017 could have been called the year of the defoliators! This year, several defoliators were active and caused more damage than usual. While defoliators typically don’t cause long-term damage to tree health, when they feed on tree leaves, it can be conspicuous and cause concern.

In 2017, the forest tent caterpillar, which feeds on bottomland hardwoods, defoliated trees in northeastern N.C. for the third consecutive year.  An aerial survey recorded fewer acres than the previous 2 years, indicating the cyclical outbreak may be nearing its end. Trees recovered by summer and no mortality was observed.

The variable oakleaf caterpillar made a surprise appearance, having not been an issue prior to this year.  After reports and ground observations of an outbreak, an aerial survey was conducted in August. The NCFS mapped 2,762 acres in Chatham, Granville, and Wake Counties with damage during this flight. Caterpillars attack many species of hardwoods and were observed at Jordan Lake State Recreational Area feeding on white and red oaks, yellow poplar, and blackgum, but should not cause long-term health issues to the trees they defoliate.

An outbreak of the oak slug sawfly was reported in Durham for the second consecutive year.  While it can attack many oak species, reports of this sawfly on overcup oak was prevalent.  Like the other defoliators mentioned, this is a cyclical pest whose populations will likely subside over time and not affect long-term tree health. 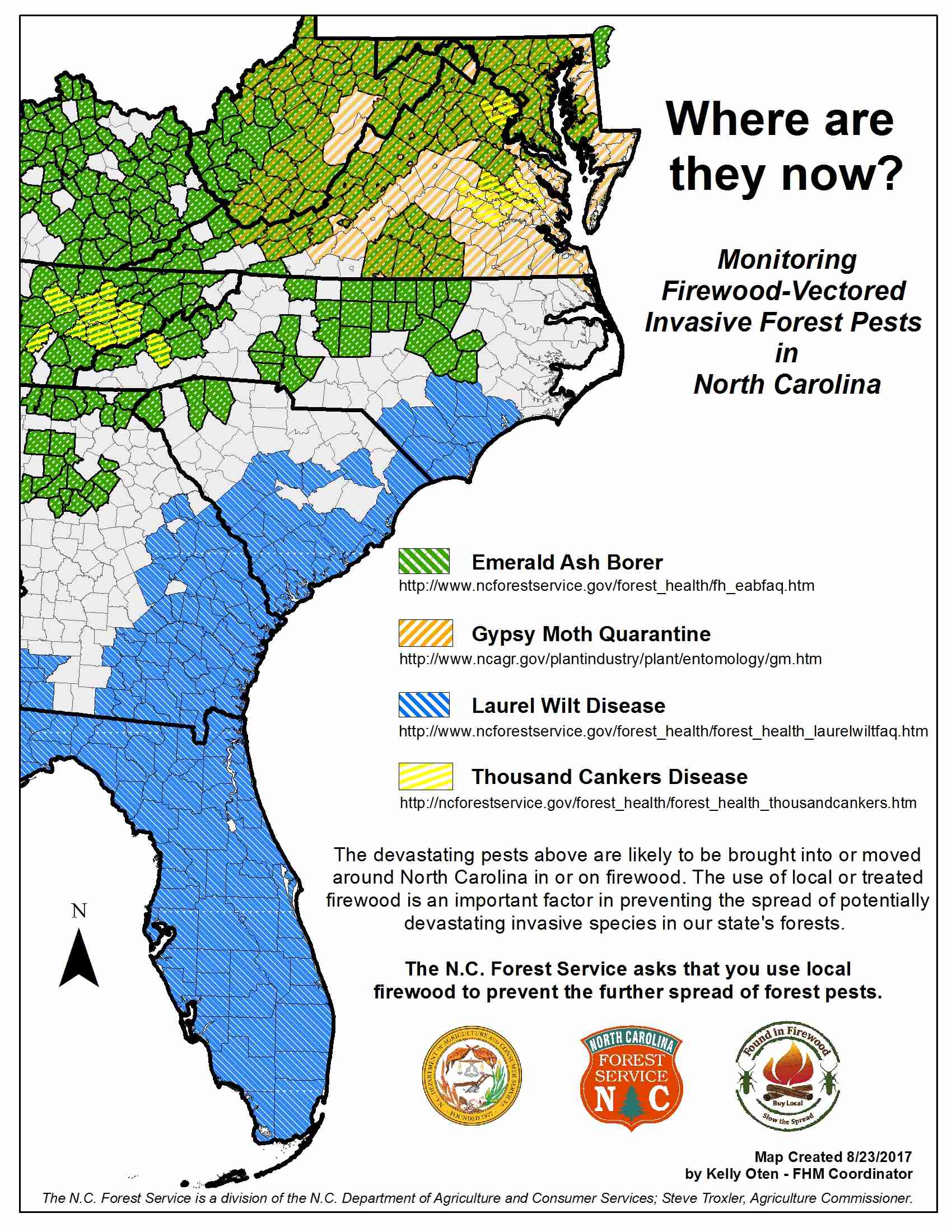