Halloween is over, but beware the devil’s riding horse!

Although Halloween has come and gone, you may still run across the devil’s riding horse!  What is this you may ask?  It is not a headless horseman or some similar apparition but instead is a native insect observed this fall in Davidson County!  More commonly referred to as the two striped walkingstick (Anisomorpha ferruginea); it is also known as the witch’s horse, devil’s darning needle, witch’s hose, stick bug, spitting devil, prairie alligator, scorpion, and musk mare. 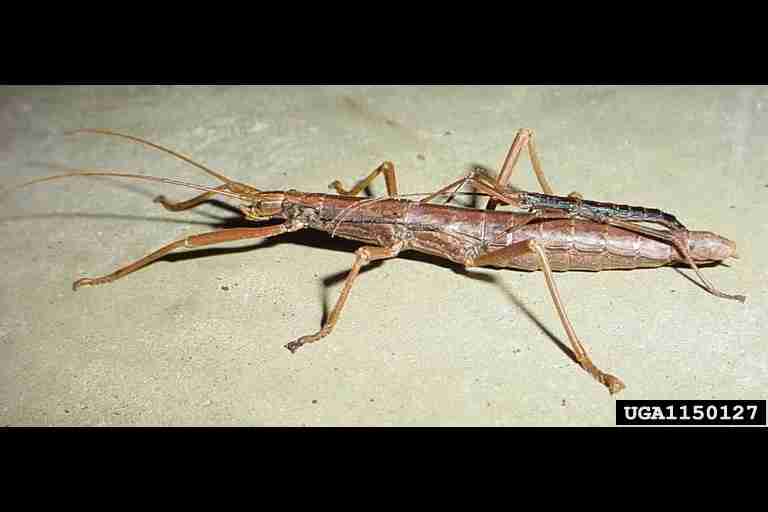 Why does this insect possess such evil sounding names?  Most likely it is related to this insect’s defense mechanism.  When threatened, they eject a foul-smelling and irritating liquid from openings immediately behind their head.  This liquid can be accurately aimed at distances of more than one foot away and is effective at repelling predators such as mice and ants.  While there have been several different reports regarding the effects of this spray on humans, do not take their defense lightly.  One individual that received this discharge in the eyes described a feeling like “molten lead” being poured into his eyes.  Some reports of respiratory problems associated with inhalation have also been reported.  At the very least, you will have a foul smell.  Pets are sometimes affected by this insect.  Some dogs have required veterinary attention due to ulcerated corneas and other problems.  Effects of this nature are not unusual so approach this insect with caution. 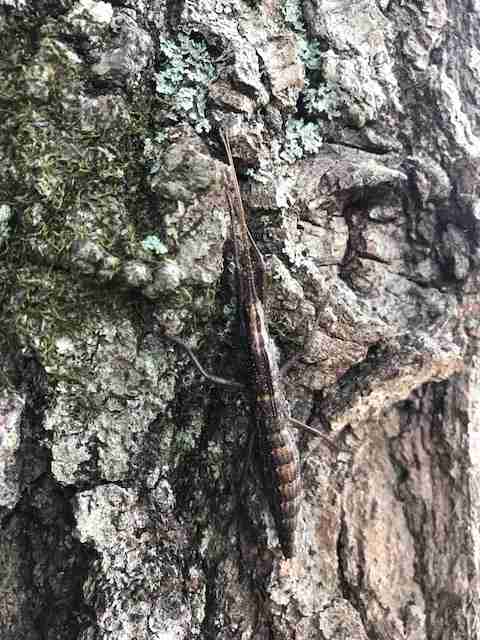 As you may have noticed, several common names refer to horses, mares, or riders.  This is due to the curious habit of the male of the species riding on the females back.  In the case of this insect, the male is much smaller than the female and may even be confused with an immature specimen.  While this is part of their mating process, they behave in this manner when not mating as well.  Some have speculated that this is a defensive behavior with both organisms able to spray their defensive fluid at the same time and in different directions if necessary.  These insects are often nocturnal and may not be seen in the forest, except by close observers.  The scientific name “ferruginea” means “rusty colored” which, in concert with their stripes, presents itself well as a camouflage for this creature.  However, they may congregate in bark cracks and other sheltered areas, becoming more noticeable at certain times.  In addition, they may be seen on or around buildings sometimes, drawing attention to this unusual looking organism.  There have been instances of homeowners trying to control these insects when they appear in abundance around a house. As a side note, they are reportedly hard to control.

Several tree species serve as host for this insect.  However, observation and the feeding habits of their closely related, more colorful and well-known cousin, the southern two striped walkingstick (Anisomorpha buprestoides), suggests they prefer oaks.  Often, they have been observed on red oak species.  But, unlike their familiar relative the giant walkingstick (Diapheromera femorata), they are not known to defoliate trees to any large extent.

This insect was noticed by forestry professional Luke Wilson in Davidson County.  He reported this insect being present on the bark of many red oak trees in the area.  He took pictures of his find and sent them to his former instructors in the Forest Management Technology Program at Montgomery Community College.  These pictures were then sent to the N.C. Forest Service where they were identified by personnel in the Forest Health Branch.

So, venture forth into the woods this fall and don’t be scared.  That strange looking creature known as the devil’s riding horse is a normal forest insect.  They do need to be treated with respect however due to their defensive mechanism.  Observe, but don’t get too close and appreciate an often-unnoticed forest insect.