The most popular Christmas tree in the U.S. is a tree native to the mountains of western North Carolina.  Often called the “Cadillac of Christmas trees” and dubbed the “Nation’s Best” by the National Christmas Tree Association, Fraser fir is beloved for its exceptional aroma, unparalleled needle retention, strong yet flexible branches (for those heavy ornaments), and needles soft to the touch.  As a $100 million industry, N.C.’s Fraser firs are second in the nation for number of trees harvested and has been selected as the official White House Christmas tree more than any other tree species.

But we’re not the only ones who love Fraser firs.  There are several insects that enjoy taking a bite out of them; the worst of them is the balsam woolly adelgid, an exotic aphid-like insect.

The balsam woolly adelgid is native to Europe and was first introduced into the Eastern U.S. in the early 1900s. By the 1950s, it reached the southeast and now, virtually all naturally-occurring Fraser fir stands are believed to be infested.  Parts of western N.C. are still riddled with standing ghosts of fir trees killed by the adelgid.  Vistas from Clingman’s Dome in Great Smoky Mountains National Park, the highest point in the Park, include standing snags of former Frasier fir.  These ghost trees have become such a common sight in our mountains, that they’re included in a tiled wall mural at Raleigh’s airport.

The insects attach themselves to the main trunk or large branches of the tree, inserting their mouthparts and feeding on the internal components of the tree.  As a result of the infestation, tissue near the tree’s buds, branch nodes, and on stunted shoots often swell, a symptom referred to as “gouting.”  There is no danger to bringing an infested fir into your home (most trees are treated with chemicals to prevent an infestation anyways), but a tree infested with the adelgid can be unsightly.  Not only is it unattractive, but often the tops of the trees curl over, causing the tree to lose its apical dominance — the shoot at the very top of the tree that is often used to hold the star or angel atop an adorned tree.  Needles lose color, fall off, and firs eventually die because of the infestation.  None of these responses make for a very festive Christmas tree!

N.C. has already lost most of its native Fraser fir trees and Christmas tree growers must combat the pest regularly.  Chemicals can be used to protect susceptible trees, but there is a desire for longer-lasting, sustainable management options.  Currently, research into implementing biological control and developing an adelgid-resistant fir are underway.

So the balsam woolly adelgid may be a mean one, Mr. Grinch, but don’t let it deter you from decorating your house this holiday season! The chances of getting an infested tree are extremely low, and there is no harm if it is infested (some may even think the woolly mass the insects produce look like snow).  To find an N.C. Christmas tree this year or to learn more about them, visit the N.C. Christmas Tree Association. 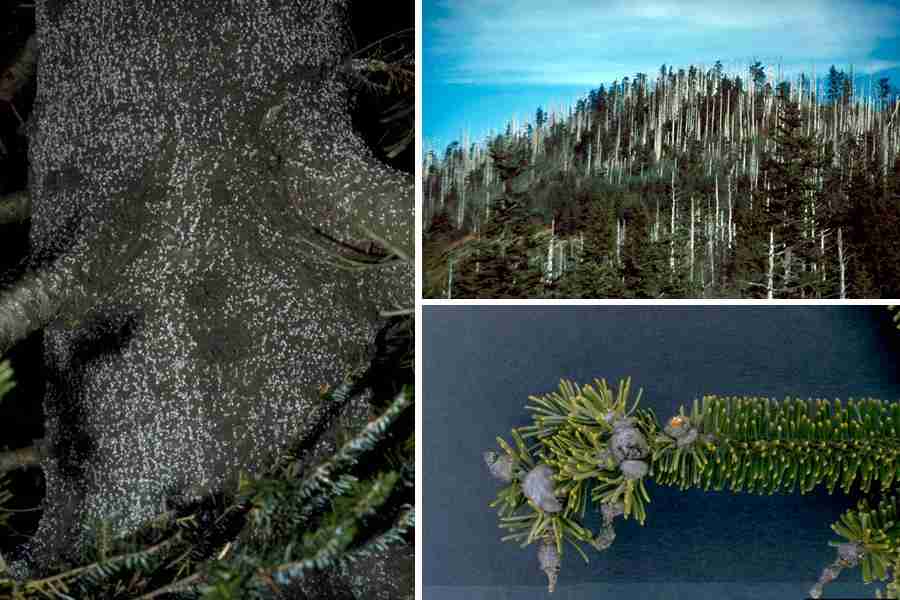