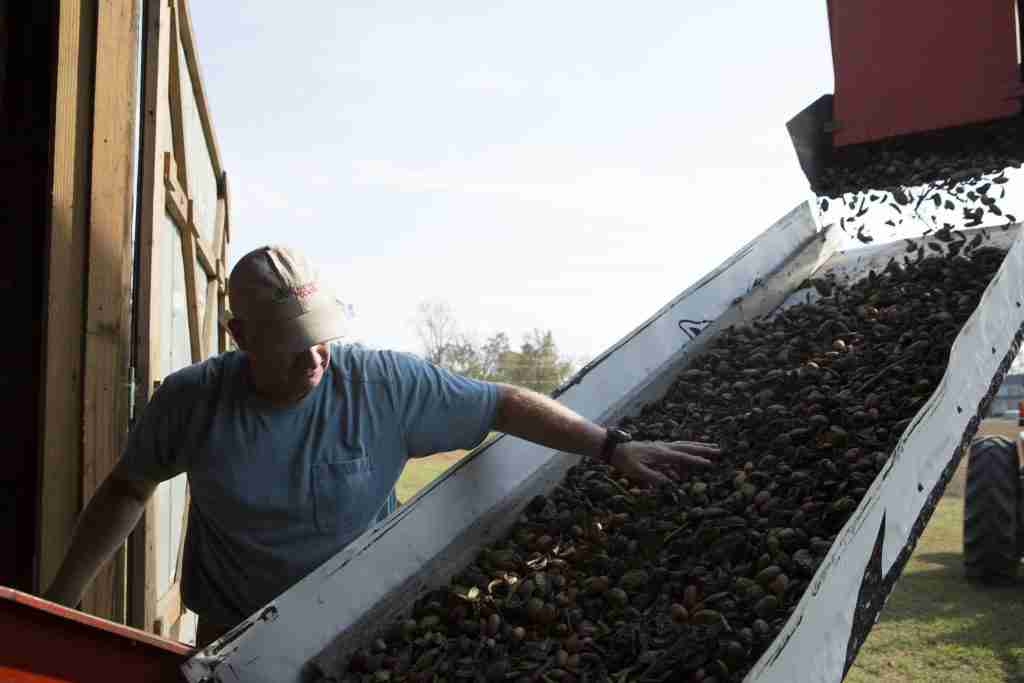 Ben Byrd, owner of Lakeview Pecans, inspects his pecan crop at his orchard in Bailey in 2016.

As families prepare for the holiday season, N.C. pecan farmers are harvesting their crop. The Tar Heel state produces 3 to 5 million pounds of pecans annually, and 2017 is shaping up to be a great year.

That’s welcome news for local growers after last year’s crop was devastated when Hurricane Matthew pummeled Southeastern North Carolina, home to the majority of the state’s pecan orchards. In 2016, many growers reported up to 80 percent crop loss.

“This year has been far better,” said Ben Byrd, owner of Lakeview Pecans in Bailey. “Most growers should have very good crops, as long as they did what they were supposed to do throughout the year.”

North Carolina is not the largest producer of pecans in the nation. Most of the state’s growers are considered non-commercial with fewer than 1,000 trees. Byrd said what N.C. orchards lack in size, they make up in quality. “I’m not being biased. Our pecans are better,” Byrd said. “Our soil is better, and we don’t have to supplement with micronutrients like other states. Minus the cold weather, North Carolina is ideal for growing pecans.”

N.C. pecans are known for their delicious flavor, but also have many health benefits including being high in unsaturated fats and being helpful in lowering cholesterol. The nuts also contain more than 19 vitamins and minerals including vitamins A, B, and E, folic acid, calcium, magnesium, phosphorus, potassium and zinc.

Whether enjoyed plain as a snack, as a topping for your salad, or inside your Thanksgiving pie, there are countless ways to incorporate pecans into your daily meals.

If you’re looking for a new way to use pecans, check out the recipe page on the N.C. Pecan Growers Association’s website. Here’s one of the featured recipes, which uses pecans and another great fall staple – N.C. sweet potatoes. 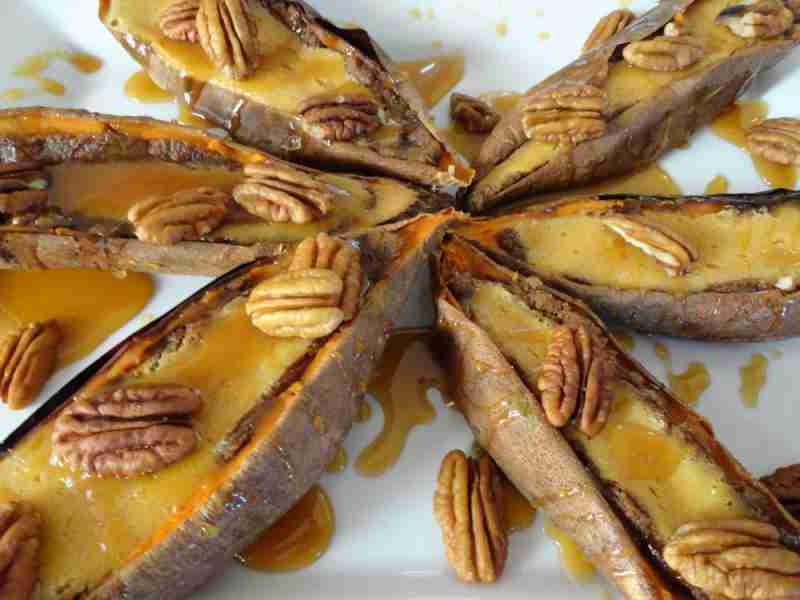 What you can prepare a day ahead
7 medium sized baked sweet potatoes made the day before you prepare your dessert, sliced in half and chilled overnight.

Place the gingersnaps, pecan halves, sugar and salt in a food processor and pulse until a nice even medium crumb has formed.  Add in melted butter and bourbon and process until the crust starts to pull together.  Place a scoop of crust mix into each sweet potato half and press along the inside of the skins until a nice even uniform crust is present all along the inside up to the rim, should be about 1/4-inch thick.  Arrange the sweet potato halves in a large round cake pan or a 9×13 pan, pressing them as close together as possible.

While the processor is running add the cold cream and the cream cheese that has been cut into several large pieces.  Process 30 seconds or until well incorporated and smooth.  Scrape down the side of the food processor.  Pulse in your spices.  Add the eggs and yolks and process for 5 seconds.  Pour the mixture into the potato shells, place cake pan in a larger pan filled ½ full with water and bake in a preheated 350 degree oven for 45 minutes, then turn off the oven and let the cheesecakes cool for 1 hour in the oven.  Drizzle with your favorite caramel filling and garnish with pecan halves.