This summer was expected to break travel records, and it wasn’t just people doing all the sightseeing. At least one insect joined in on the vacation fun this year: the emerald ash borer. The emerald ash borer popped up in new areas across the state this year, found for the first time in eight additional counties. Now, 33 North Carolina counties are part of the not-so-exclusive emerald ash borer club. The newly added counties are Alamance, Avery, Cabarrus, Caswell, Haywood, Mecklenburg, Mitchell, Rockingham and Surry.

Emerald ash borers have no issues eating at the local ash tree buffet while on vacation either. They attack all species of ash and without protection from pesticides, tree death occurs three to five years after initial attack. White fringetree, a small native flowering tree, is also susceptible to the emerald ash borer. 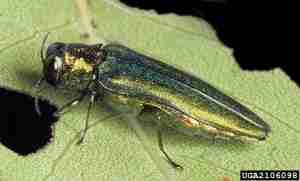 In 2015, the emerald ash borer had another active year when 14 new counties were declared positive, prompting the entire state of N.C. to be quarantined for the invasive pest. This quarantine regulates the transportation of ash material and hardwood firewood to reduce the accidental movement of it from one place to another. Because this wood-boring pest can easily hide within wood, not only will the quarantine help reduce its spread, but North Carolinians are encouraged to burn firewood within 50 miles of where it is cut. These are your forests to protect: buy local firewood, burn local firewood!

While many hope biocontrol efforts are effective, it is a long-term approach and the only sure way to protect ash trees now is through the use of insecticides. There are many options available to homeowners to protect or save lightly infested trees, with do-it-yourself applications of imidacloprid and professionally applied emamectin benzoate being the most popular.

So, don’t take a vacation from monitoring ash trees in your yard. Infested ash trees exhibit a general decline in tree health. The tree canopy thins and whole branches may die. In addition, there could be sprouts growing from the trunk of the tree, vertical splits in the bark, and/or increased woodpecker activity. When any combination of these symptoms is noticed, a closer inspection for direct evidence of the beetle should occur. The most obvious sign of the beetle is the quarter-inch D-shaped exit holes in the bark, caused when the adult beetle emerges from the tree. Upon removing the bark from the tree, winding, S-shaped larval galleries can be seen.

It’s not too soon to consider the options of protecting your tree, no matter where you live in the state. Emerald ash borer is on the move and likely to come to your neighborhood soon, if it hasn’t already. The N.C Forest Service’s emerald ash borer range map is constantly updated to provide the most up-to-date known whereabouts of this tree killer and help you make the decision. If you suspect you have emerald ash borer in an uninfested counties based on their signs and symptoms, contact your N.C. Forest Service county ranger, your county extension agent, or email newpest@ncagr.gov.