NC Board of Agriculture approves rules for Animal Shelter Fund 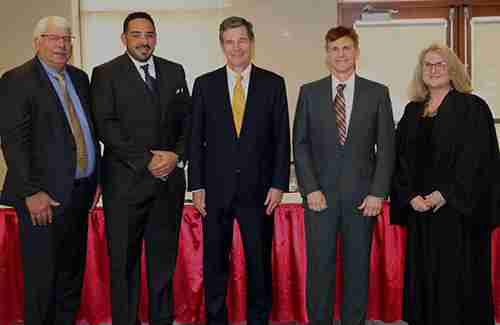 From left, Agriculture Commissioner Steve Troxler, Jose Calderon, Gov. Roy Cooper, Scott Tyson and Supreme Court Justice Barbara Jackson. Jackson swore in Calderon and Tyson as new members of the N.C. Board of Agriculture. They were appointed by Cooper.

The N.C. Board of Agriculture on Aug. 23 adopted permanent rules for the Animal Shelter Support Fund.

The rules define eligible expenses and establish application guidelines for the fund. Temporary rules have been in place since November 2016.

The General Assembly established the fund in 2015 to reimburse local governments for expenses related to their operation of a registered animal shelter due to the denial, suspension or revocation of the shelter’s state registration or because of unforeseen catastrophic disaster at an animal shelter.

In other action, the board:

Two new board members were sworn in at the meeting. Jose Calderon of Wake County and Scott Tyson of Nash County were sworn in by N.C. Supreme Court Justice Barbara Jackson. They were appointed by Gov. Roy Cooper, who attended the ceremony.

Calderon is sales manager with Farm Pak Products Inc., one of the world’s largest growers, packers and shippers of sweet potatoes. Tyson is president of Oakland Grove Farming, a family farm that produces tobacco, sweet potatoes, soybeans, wheat and cucumbers.