Trees may not need an annual visit to the doctor, but they do need care every now and then. Many homeowners with yard trees are all too familiar with annual trimming, mulching, or watering during periods of drought. Landscape trees give us joy and beauty, not to mention improve our health and well-being and increase property values. But some issues with trees are hard to see, especially if you don’t know what you’re looking for.

That’s why August was officially named Tree Check Month, created as a reminder to check trees for signs and symptoms of the Asian longhorned beetle. The Asian longhorned beetle is a non-native insect that has caused quite a stir in the northeast by killing trees in yards, parks and forests. August is peak emergence for the Asian longhorned beetle and, in the case of this insect, finding an infestation early is the key to eradication. It has successfully been eradicated from several areas after early detections led to rapid response. It has not yet been found in North Carolina, but the threat of its introduction is real and constant.

One of the things that makes the Asian longhorned beetle such a big threat is that it attacks many species of trees, many of which can be found in North Carolina. They attack maple, ash, birch, elm, horse chestnut, poplar, willow, mountain ash, mimosa and more.

So what should you look for if checking trees for the Asian longhorned beetle? There are a few things that may tip you off: 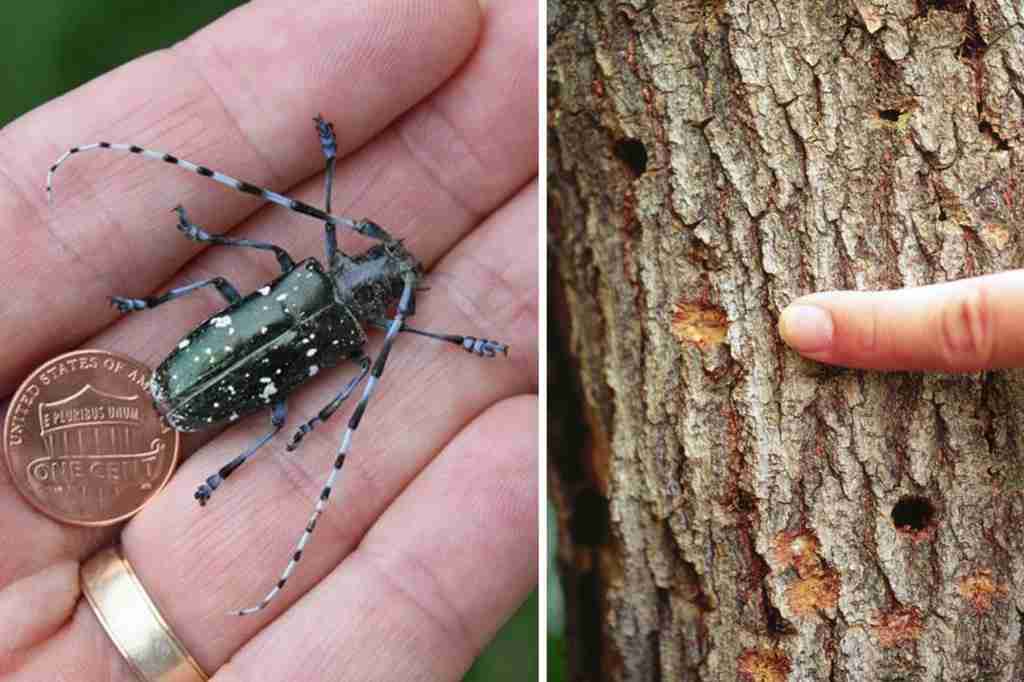 LEFT: The adult Asian longhorned beetle is black with white spots and has banded antennae. Early identification of the insect is critical in an eradication program. Image: Joe Boggs, Bugwood.org. RIGHT: Exit holes of the Asian longhorned beetle are round and about the size of a pencil (shown below finger). Egg-laying niches are oval or round depressions in the bark. Image: Dennis Haugen, USDA Forest Service, Bugwood.org.

Even though the Asian longhorned beetle has not been found in North Carolina, we encourage you to check your trees anyway. This insect can easily travel hundreds of miles in infested materials such as firewood, so their sudden appearance is not out of the question.

School is just beginning, but it’s already time to administer an exam! A tree exam can go a long way to protecting current and future trees of North Carolina. Please report the location and descriptions of potentially infested trees to 1-800-206-9333 or newpest@ncagr.gov.