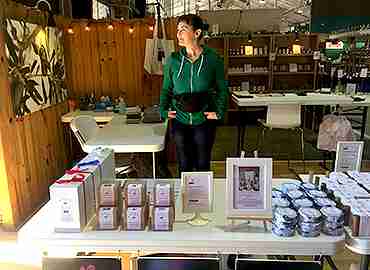 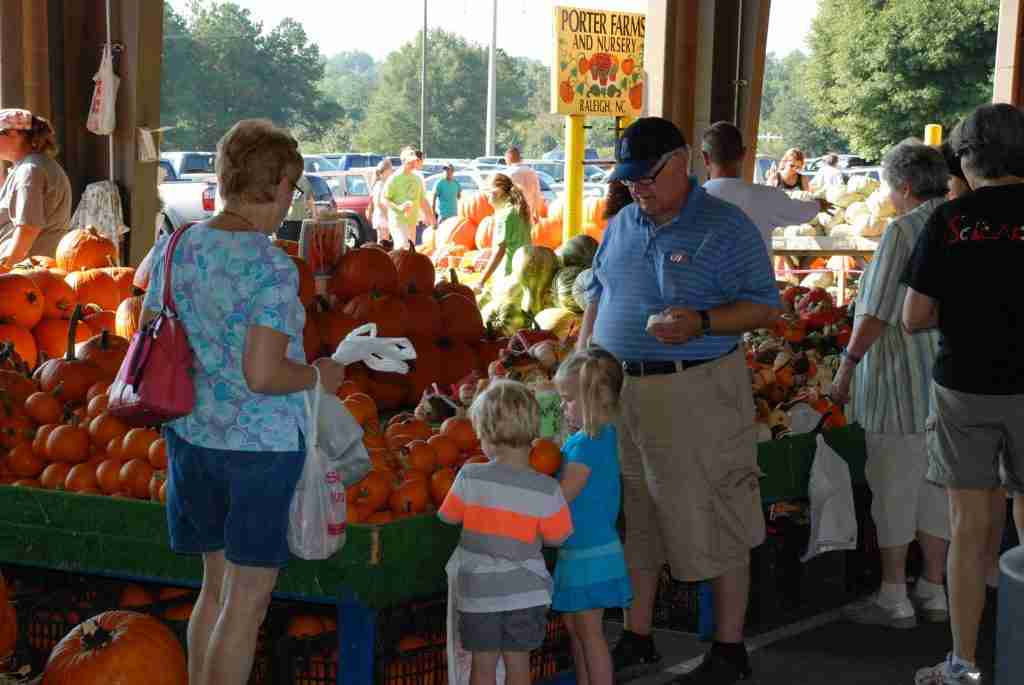 Porter Farms and Nursery sells pumpkins and mums at the State Farmers Market in Raleigh from Sept. 15 to Oct. 31.

National Farmers Market Week is Aug. 6-12. North Carolina has numerous reasons to celebrate this event because our state’s farmers markets provide residents with fresh, healthy food and support the efforts of local farmers. According to the U.S. Department of Agriculture, 50 percent of farmers selling at farmers markets derive at least half their revenue from farmers market sales. Join us this week in thanking farmers and farmers market staff for the role they play in agriculture.

Summer is the busiest time of year for the State Farmers Market in Raleigh. But, for a market that attracts more than 3 million visitors each year, every season can feel busy. For the 100 vendors spread out between the retail shops, farmers area and wholesale area, busy is how they like it.

“Our record for visitors happened in 2012,” said Monica Wood, marketing specialist. “We had 3.8 million visitors that year. It was right when the buy local movement had really caught on. Consumers have more options now with other places selling local and CSA programs that deliver to your door. However, many of our vendors have an extremely loyal consumer base.”

“We’ve had many vendors use the market to grow their business,” Wood said. “We are fortunate to have a diverse, year-round market. Our farmers have extended their season with greenhouse crops and we’ve had more farmers adding meat products and other specialty items. We also have the Farmers Market Restaurant, grill and N.C. Seafood Restaurant that help bring out customers.”

Many regulars come each year to get strawberries, blueberries, peaches, corn, tomatoes, pumpkins or Christmas trees from the same vendor. These loyal customers are what help farmers grow their business, Wood said.

Porter Farms and Nursery in Willow Spring started selling produce at the market in the late 1990s. “We expanded our business to include two roadside stands,” said Ashley Porter. “Our business at the State Farmers Market played a role in that success.”

Porter Farms’ biggest stand opened in 2001 and is located at the farm on Highway 42 in Willow Spring. “We open our stand in April with strawberries and sell produce, plants and homemade ice cream until the end of October,” Porter said. The farm’s other  produce stand and a pick-your-own strawberry patch opened in 2007 and is located on Lake Wheeler Road at Ten Ten Road in Raleigh.

“We still bring our mums and pumpkins to the State Farmers Market each year,” Porter said. “We have customers that come there each year looking to buy from us.”

Anders Natural Soap Co. enjoys a loyal customer base in the retail shop area of the State Farmers Market.

Anders Natural Soap Co., located in the retail building at the State Farmers Market, has been selling at the market for 16 years. It started in the craft shed but eventually moved into a permanent spot in the retail building. “We started started small, making our soaps at home before moving into a manufacturing facility in Cary,” said Patricia Anderson. The company’s soaps are now sold at museums across the country, including the Swedish American Museum in Chicago and the Vesterheim in Decorah, Iowa.

“We started making soaps when we lived in Sparta and would give them to friends and family,” Anderson said. “We wanted to use something that we felt was good for our body and contained no chemicals. Once our children graduated college, we decided to make soap full time. Now we hope to pass along the business to them eventually.”

Anderson’s spot at the market directly led to a new business opportunity. “Someone that worked for the corporate office at RDU Airport saw us at the market,” she said. “We ended up having a store in Terminal 2 for a while.”

Most of Anderson’s sales still come directly from their storefront at the farmers market, where she enjoys a loyal customer base.