This summer, North Carolina has its own “Very Hungry Caterpillar,” a favorite children’s book character known for its large appetite. This caterpillar won’t eat through various fruits, cupcakes and ice cream as it does in the book, though. Rather, this caterpillar is eating through leaves of white oak, red oak, yellow poplar, black gum and other trees. 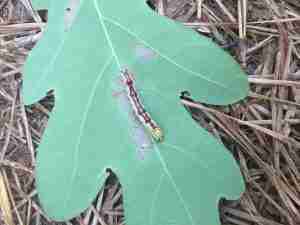 The variable oakleaf caterpillar munches on many different tree species’ leaves, but rarely is cause for concern. Image: K. Oten, NCFS.

The variable oakleaf caterpillar is a common, native pest in the eastern U.S. Most years, leaf consumption by this caterpillar is minor and goes unnoticed. However, outbreaks occur periodically and can be extensive. Several areas of heavy variable oakleaf caterpillar defoliation have already been observed this summer and more can be expected. So far, southern Wake and northern Chatham counties appear to be hit heaviest, with three areas of defoliation reported to date. Historically, defoliation is the worst in August, so more areas of heavy defoliation may pop up over the next month, and areas where it is already observed may get worse.

As the name suggests, oak trees are among the variable oakleaf caterpillar’s favorite trees to feed on. However, their appetite also extends to beech, basswood, elm, walnut, boxelder, apple and persimmon. A recently observed outbreak near Jordan Lake in Chatham County affected white and red oaks, yellow poplar, blackgum and others. Another ongoing outbreak near Harris Lake is hitting willow oak the hardest. Virginia is also experiencing outbreaks of this caterpillar, with more than 7,000 acres affected.

Outbreaks of the variable oakleaf caterpillar can be quite large. They have been recorded covering millions of acres and hundreds of miles. While this may sound and look bad, they rarely cause major or long-term issues to tree health. Defoliation occurs toward the end of the growing season, so much of the photosynthetic activity for the year has already occurred and trees are typically able to re-leaf the following year. The bigger threat is when defoliation occurs two to three years in a row. Defoliation weakens trees, increasing their susceptibility to other threats such as drought or disease. 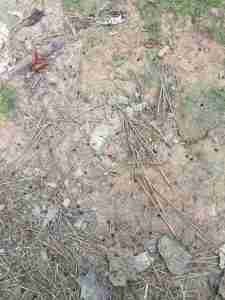 Each of these dark pellets on the ground is poop from the variable oakleaf caterpillar. During heavy infestations, it rains poop. Image: K. Oten, NCFS.

Luckily, management is seldom warranted. Several parasitoid wasp species attack the variable oakleaf caterpillar’s eggs, increasing in numbers in response to the large populations. These wasps are tiny and do not sting humans, but they are capable of killing up to 90 percent of the caterpillar’s eggs. There are also several wasp species that attack and kill up to 90 percent of the immature larvae that emerge from the remaining eggs. Together, these wasps greatly reduce caterpillar populations and chances for consecutive years of heavy defoliation. Occasionally, pesticide treatments may be desired to protect landscape trees from defoliation.

As with most animals, with a lot of eating comes a lot of poop. The first infestation this summer was noticed by hikers who heard frass (the fancy name given to insect poop) dropping and hitting leaves, making it sounds almost as if it were raining despite the sunny skies. Unlike rain though, getting hit with caterpillar frass is not very refreshing on a hot summer day. So, enjoy the fact that these caterpillars will be short-lived, as will the defoliated trees and poop showers.