Laurel wilt is a devastating non-native disease of redbay trees and other plants in the laurel family in the Southeastern U.S. Native to Southeast Asia, it was first detected near Savannah in the early 2000s and has since spread to eight additional Southern states, from Texas to North Carolina. It has already killed an estimated half a billion redbay trees since its introduction to the U.S. 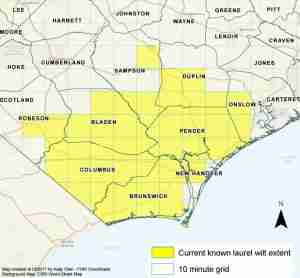 Surveys conducted in winter or early spring help to determine where and how quickly laurel wilt is spreading. This year, additional positive sites were found in Brunswick, Columbus, Onslow, Pender, and Robeson counties. There were no detections in new counties.

The disease kills trees in just a few weeks. The disease attacks plants in the laurel family, primarily redbay and sassafras. While redbay trees are not a high-value timber species, they provide food and shelter to many animals, including songbirds, turkeys, quail, deer and bears. A couple of swallowtail butterflies rely almost exclusively on plants susceptible to laurel wilt, endangering their continued existence. There are also two rare plant species that may be lost: pondspice and pondberry.

Currently, there is no reliable way to prevent or treat laurel wilt. Insecticides have not been effective in stopping beetle attacks, and fungicides are costly and need re-application. Our best weapon is slowing the spread, so please use local or treated firewood and notify your N.C. Forest Service county ranger if you suspect laurel wilt has invaded a new area.