Springtime in North Carolina means it’s raining pollen!  A yellow glaze coats everything outside and many are taking their allergy medicine religiously.  But if you’re in the right place at the right time, something else might be dropping onto your head from the pine trees: little worm-like insects called the pine catkin sawfly.

Adult sawflies, which belong to the same order as wasps and bees, emerge from the soil in early spring.  After feeding on pollen of early-flowering plants, the females lay eggs on male cone buds of pine trees.  Which if you haven’t noticed, North Carolina (aka ‘Land of the Pines’) has a bunch of.  Male cones are responsible for that nasty pollen you see everywhere, whereas the female cones develop into pine cones once pollinated. 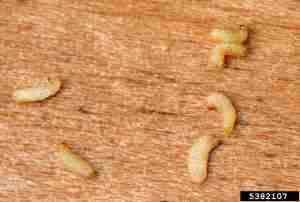 When the pine catkin sawfly larvae hatch, they begin feeding on the pollen of the male cones.  Luckily for us, this reduces the amount of pollen the tree releases!  Unluckily for us, there’s so much, I’m not sure anyone has noticed.

Once they’ve had their fill, they drop to the ground (or on your head) to pupate in the soil.  Reports indicate they burrow up to 3 inches beneath the surface, which is a long way to go for a larvae that’s 3/16 of an inch.  That would be like a 6 foot tall man burrowing down 96 feet!

After burrowing down, they rest for 2 years beneath the soil before emerging as adults and repeating the cycle.  They can be found in all species of southern pines and have been dropping from the trees for the past couple of weeks here in North Carolina.

So while having small sawfly larvae plop onto your head may not be the most pleasant thing, at least they’re doing their part in reducing the pollen quantity around here.  And that’s nothing to sneeze about!