Avian flu back in the news 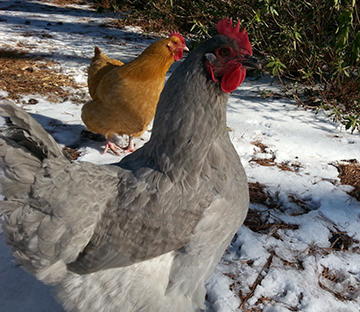 Late on March 3, our Veterinary Division got word that there was a probable case of highly pathogenic avian influenza in a commercial poultry flock in Lincoln County, Tenn. Veterinary officials closely monitored the situation over the weekend and staff participated in conference calls each day to stay abreast of news coming from local and federal sources. The poultry staff was asked to prepare for possible disease-response activities in North Carolina, or possibly in Tennessee as employees did in 2015 when they assisted with HPAI outbreaks in Minnesota and Iowa.

Many lessons were learned from the 2015 outbreak in Midwest, and preparations by the states have paid off. “The most recent information provided suggests that the Tennessee disease outbreak has been quickly and appropriately managed and the level of threat to North Carolina and other Southeastern states is markedly diminished,” said State Veterinarian Doug Meckes. “Many North Carolina families rely on the poultry industry for their livelihoods, and the department will continue to work closely with local, county and federal partners and the poultry industry to help prevent the introduction of disease or immediately respond should the disease be identified here in North Carolina.”

On March 5, the U.S. Department of Agriculture announced it had confirmed that the poultry in Tennessee were infected with an H7 avian influenza. The agency also said it was working closely with state officials to depopulate and contain the spread of the virus.

Commercial and small flock owners in North Carolina should implement strict biosecurity measures to limit the possible introduction of HPAI to their flocks. It’s also important to know the warning signs and be aware of changes to your flock that may signal that something is wrong. Visit our website, www.ncagr.gov/avianflu, for more information about HPAI and our preparedness efforts.